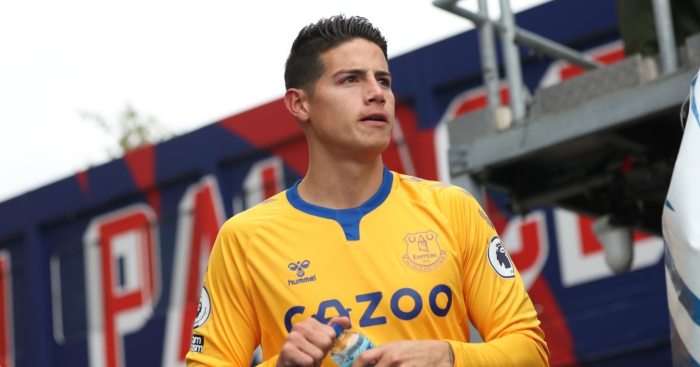 Three games (two in some cases) may not be enough to work out whether Donny van de Beek is a complete waste of money or if Timo Werner is a Premier League flop, but it’s plenty when selecting the bargain buys of the summer. We’ve picked five brilliant bits of business, not including players like Matheus Pereira, Tomas Soucek and Illan Meslier, who were already at their clubs before making permanent moves…

‘Unfortunately, because James Rodríguez moved from Real Madrid on a free transfer to Everton, no money is due.’ That’s according to former club Banfield, who were expecting a solidarity payment after it was initially reported that Everton paid Real Madrid £20million for the Colombian.

A kicker for the Argentine club; a huge coup for Everton. Some fools speculated as to whether James was a gamble the Toffees could afford. As it turns out, it wasn’t really a gamble at all. They’ve paid nothing for a trophy-laden horse who could have stopped in the starting gate, but has instead got off to an absolute flyer.

Three games and three brilliant performances, without the need to break from a languid, smooth trot into an unnecessary sprint. He’s not Troy Deeney: he’s a Premier League superstar-elect.

Timothy Castagne is the latest to join the sultry ranks of the English top flight. Ricardo Pereira – another little saucepot – was one of the stand-out players for Leicester last season, with his quality perhaps taken for granted before his injury and the bearing that had on the Foxes’ collapse. But he will have quite the task to displace the Belgian on his return to full fitness.

Coming from an Atalanta side where the whole is far greater than the sum of its parts, the £25million Leicester paid for the 24-year-old may have appeared steep, but a goal or an assist in each of his first three Premier League fixtures has put any concern to bed. The Leicester transfer sorcery continues.

Chelsea were reticent but not altogether unhappy as Willian left Stamford Bridge on a free transfer. His best performances came in times of adversity: when Chelsea were playing poorly, Willian played well. He may have experience of winning titles, but he was far from the exceptional force he can be in those most successful of seasons.

The Blues aren’t going to win the title this year either, but have plunged into the transfer market to give themselves a better chance in future years. They’re probably right, though Kai Havertz and Timo Werner have hardly hit the ground running and their free signing has already cost them more than money.

While Chelsea have designs on a title – however fanciful that might be – Arsenal aren’t considering such a push yet. Willian is a bridge to take them that step closer. His two assists on his Arsenal debut were an indication of a threat from the right that is often missing or at least erratic when Nicolas Pepe plays. The Brazilian looks as though he will be able to share a bigger chunk of the load borne by Pierre-Emerick Aubameyang on the left.

“I had seen my dad crying late at night because he could not pay the bills. I remember the day that me and my brother ate and not my mum and dad.” Emiliano Martinez’s rags-to-riches tale, told through tears as he held the FA Cup trophy for Arsenal last season, was a wonderful story. Urged to leave home by his parents to chase a dream, he had achieved more than that fantasy.

And this summer, unwilling to return to the bench as back-up for Bernd Leno, Martinez moved to Aston Villa for £17million. That price would have been seen as hefty – even ludicrous – at the start of last season, but after his stunning displays in Leno’s absence, it looks a very good bit of business.

In his eight Premier League starts for the Gunners last season, Martinez saved an incredible 33 of the 42 shots on target against him. His 81% save percentage meant he was the league’s most efficient stopper, admittedly with a smaller samply size than most. A wonderful penalty save on his Villa debut to win a clean sheet confirmed his brilliance to be more than a passing fad.

In truth, not much was gleaned from Thiago’s debut against Chelsea. A convoluted, blown-up stat besides, he didn’t do anything special.

His 45-minute stroll against ten men didn’t earn him a place on this list. In fact, it was probably closer to having him banished from it; he did concede the penalty after all.

There were signs of the quality: the touch; the vision; the awareness. But his inclusion is due to the £20million price they paid and because of the inevitable difference he will make to Liverpool. There’s very little chance of a player of that quality not coming up trumps sooner rather than later. We’re hedging our bets, rather than paying out after a ‘meh’ half of football.