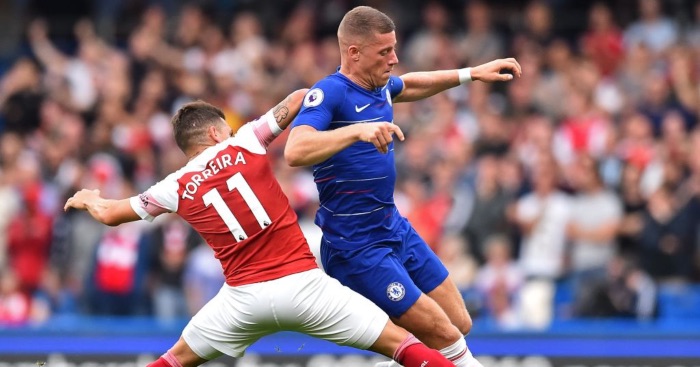 It’s alright – the (f***ing brilliant) Premier League is close at hand. We made it. But there are some that may not be quite so pleased the international break is over. Here are the five Premier League benchwarmers that starred for their countries…

Olivier Giroud (Chelsea)
Is there a more highly regarded but more consistently overlooked footballer than Olivier Giroud? Still leading the line for France, scoring the only two goals for Les Bleus in their latest qualifiers, a stalwart in their World Cup winning side, yet still second choice at club level. This time as understudy to one of Chelsea’s forgotten youth, Tammy Abraham.

France coach Didier Deschamps has praised Olivier Giroud’s form for his country, but admitted a lack of game time with Chelsea is damaging his international chances.

The Frenchman exhibited his typical stoicism at the start of the season, insisting he would fight Abraham for the starting place at Chelsea, presumably thinking – as most did – that the form of his 22-year-old team-mate would be short-lived. But as the games tick by and his competition continues to bang in the goals, there’s no wonder Giroud is looking to the Stamford Bridge exit as that initial forbearance has turned to frustration once again.

Lucas Torreira (Arsenal)
Matteo Guendouzi and Granit Xhaka have formed the preferred fulcrum in Unai Emery’s Arsenal midfield this season, with Lucas Torreira utilised – if at all – in a more advanced, less familiar, attacking midfield role. It’s a move that in principle – with Emery’s supposed pressing style of play – makes sense, with Torreira’s boundless energy potentially a greater asset further up-field. But, it hasn’t worked.

I’m still trying to work out how on earth Lucas Torreira has gone from a defensive midfielder who was one of the first names on the teamsheet to a rotational creative midfielder in the space of 6 months.

When he plays in his natural defensive midfield role, as he still does with aplomb for Uruguay (it was 1-0 to the Uruguay on Saturday), he looks assured and tactically astute, his terrier-like qualities allowing him to win back the ball and turn defence seamlessly into attack. But when he plays the more advanced role, his technical limitations become apparent as he lacks the vision and accuracy to split a defence or the finishing ability to provide a real goal threat. Especially if he is only given seven minutes.

Gabriel Jesus (Manchester City)
No-one has, or ever would, deny the ability of Gabriel Jesus. He’s a natural finisher, with no small amount of skill and prowess in front of goal. He’s just unfortunate that that ability – obvious though it is – still pales in comparison to that of Sergio Aguero, one of the greatest strikers in Premier League history and his direct competition to start for Manchester City.

The thought of any player being good enough to start up front for Brazil but not for their club is a ludicrous concept. This was made more farcical by Jesus being the standout performer for Brazil in their 1-1 draw with Nigeria on Sunday. He was deployed from a wide position by Brazilian coach Tite on this occasion, a role he occasionally took up for Palmeiras before his £28million switch to Man City. Perhaps he could play for City on the right? Although Riyad Mahrez has started the season pretty well. What about from the left? No, Raheem Sterling’s got that sewn up. Or just behind the striker? You’re forgetting all of the Silvas.

Not many positives today, but I like how Gabriel Jesus & Roberto Firmino are continuing to look good together.

A lot of people forget, but Gabriel played as a winger a lot with Palmeiras and did during the Olympics. pic.twitter.com/pICHpLprb4

Pep Guardiola has said he understands the frustrations of “the animal” Jesus at not playing more football, but he may need to let his striker out of his cage to stretch his legs and score a few more goals, or risk losing him to another top European club.

Dejan Lovren (Liverpool)
The 30-year-old Croat recently said in an interview that he felt he was in the prime of his career, a statement based presumably on the evidence of his form alongside Domogoj Vida for Croatia. But this was also an interview that could have been conducted during all but one of Liverpool’s Premier League games so far this season, because he wasn’t required on the pitch.

Lovren was linked with a summer loan move away from Anfield, with AC Milan and Roma both reportedly interested, but instead chose to stay at Liverpool as he insisted he didn’t “deserve to go anywhere on loan” – whatever that means? He also said he’s “not the kind of player that likes to be benched and earn money” despite surely knowing that would be the case this season as a fight to displace either Joel Matip or Virgil van Dijk must be one of the most futile in world football.

Ross Barkley (Chelsea)
The Chelsea midfielder is losing a battle with Mason Mount for a starting berth at Stamford Bridge, but appears to be winning the same battle against the same man on the international stage. Mount’s stellar performances for the Blues this season have led to a bit-part role for Barkley in the Premier League, and prompted Gareth Southgate to select the youngster ahead of Barkley for England against the Czech Republic. A decision he presumably regretted as Mount looked totally isolated, contrasting starkly with the immediate impact of Barkley when he replaced the 20-year-old.

A driving run out of defence to set up one attack and a superb pass to send Harry Kane through on goal brought back memories of the combative 16-year-old that broke into the Everton first team and drew comparisons with the likes of Paul Gascoigne and Wayne Rooney. He followed that with two goals and an assist against Bulgaria on Monday, in contrast to his performances for Chelsea, which are characterised by a nervous ceding of possession and a lack of the goal threat that he provides for his national team. He is high on our England ladder if not in Frank Lampard’s reckoning.