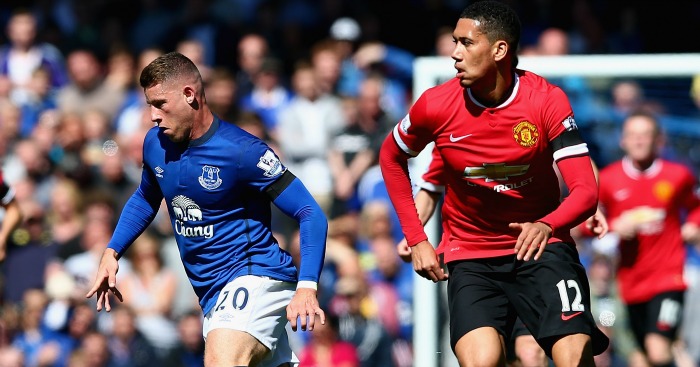 Having been highly rated when younger, which five players have really stepped things up a gear? Stop singing Boyz II Men songs and read on…

Gerard Deulofeu (Everton)
“As good as he wants,” was Roberto Martinez’s simple answer when asked how good Gerard Deulofeu can be. The Spaniard had just taken apart Middlesbrough in the Capital One Cup. His compatriot was suitably impressed.

During Deulofeu’s first spell at Goodison, supporters saw his natural talent, but also his rawness and fragility as a young winger. He was Willo the Wisp, 16 of his 25 league appearances coming from the bench. Suddenly the Wisp is all grown up.

“Two years ago when we had him we knew he was a young man with an incredible natural talent,” Martinez says. “Now he’s not a young man anymore. He’s young in age, but very mature.”

And spectacular to watch, too. Barcelona’s buy-back clause on Deulofeu stands at €9m if they take up the option next summer. It’s enough to make Everton blue.

Chris Smalling (Manchester United)
Smalling may somehow have crept up to the age of 26, but we all mature at different times. Following his shambolic sending-off in the Manchester derby last November, the defender improved immeasurably over the course of the season.

Yet he has taken a different sort of step up during the course of this campaign, displaying leadership qualities to complement defensive aptitude. Now a firm fixture in Roy Hodgson’s central defence, Smalling is – after David De Gea – the player who United would miss most if absent.

Until 2015 arrived, the £12m United paid to Fulham when Smalling was 20 appeared a worthwhile, but ultimately unsuccessful, gamble. Now it looks a bloody bargain.

Jack Butland (Stoke City)
In July 2014, Brighton were linked with a permanent move for Jack Butland, who had played 224 minutes of league football in his first season at Stoke. A year later, only 270 more minutes had followed. English goalkeeping’s next big thing was still only 22, but already in danger of gathering dust. It’s one thing being the back-up at Old Trafford or the Emirates, but the Britannia?

Having bided his time, Butland has revelled in the departure of Asmir Begovic from Stoke. He has arguably been the best goalkeeper in the Premier League, also making his first competitive start for England. No longer do we demand to see Joe Hart wrapped up in cotton wool and tissue paper every evening.

Eighteen months after those Brighton links, it is Liverpool and Manchester United rumoured to be interested in Butland’s signature. For £20m, no less.

Ross Barkley (Everton)
For the 427th time: We have always liked Ross Barkley, but the placement of another young, as yet unproven, English talent on a high pedestal grated more than a touch. Let’s just let him be.

“He is ready to kick on,” was Roberto Martinez’s pre-season insistence after criticisms of Barkley in 2014/15. Kick on he has. Only two English players have scored more Premier League goals this season, while none beat his record of five assists. With Barkley (21), Deulofeu (21) and Romelu Lukaku (22) linking together, Goodison is the place to watch some sexy football.

“I think he’s a completely different player from what we saw last season or a couple of seasons back: maturity, always controlling the big moments,” says Martinez. “I think his overall performance was of a player a lot older.” Boy has become man.

Erik Lamela (Tottenham Hotspur)
“After two seasons at Tottenham, now is the moment for him. Not to put pressure, but it’s true. It’s a key moment for him to develop and to move on his game,” said Mauricio Pochettino in August. There are few managers more mild-mannered than Pochettino – “It’s time to stop being such a dreadful waste of money, Erik” would not have been an unfair request.

Three months down the line, and Lamela has stepped up to the challenge. He has provided two goals and three assists in the Premier League, and scored twice more in Europe. No Tottenham player has created chances more often.

It is Lamela’s work off the ball that has most impressed, finally embracing Pochettino’s demand of players to press, run and hassle. Only Mousa Dembele makes more tackles regularly for Spurs than the Argentinean. A reputation is quickly being shifted.

“It is good for him and good for us that he is starting to show his real talent and his real quality,” Pochettino says. “Lamela is still young, and sometimes you need to create a good dynamic in the team and around the training ground to help some players.” Makes you feel warm inside.