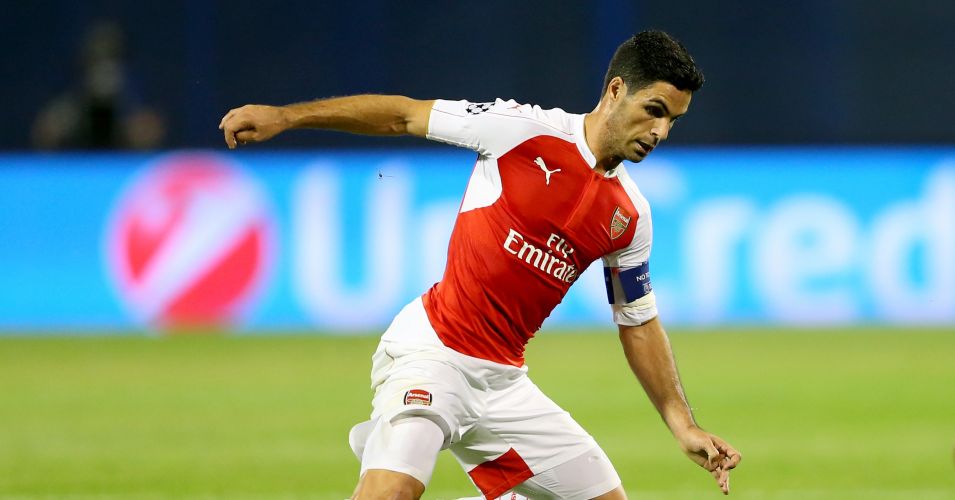 Mikel Arteta
Alex Song. Emmanuel Frimpong. Henri Lansbury. Abou Diaby. The list of midfielders who have attempted and failed to dethrone Mikel Arteta during his five-year spell at Arsenal is undoubtedly illustrious. The Gunners signed the Spaniard in August 2011, and he proceeded to finish fifth and fourth in Arsenal’s Player of the Season polls for the 2011/12 and 2012/13 campaigns respectively. How very Mikel Arteta.

Arteta was announced as Arsenal captain in summer 2014, being handed the unenviable role of replacing club legend Thomas Vermaelen. Be it through injury or not being Santi Cazorla or Francis Coquelin, the 33-year-old has played just 15 Premier League games since. His honorary captain role has been restricted mainly to ensuring Jack Wilshere is not lonely in the treatment room. The Spaniard became the seventh Gunners captain of the last decade upon his undertaking of the armband, and with his contract expiring in the summer, his reign is likely to be kept in Cech.

John Terry
Kurt Zouma’s injury may provide John Terry a stay of execution at Chelsea, but the Captain, Leader, Legend is simply no longer fit for purpose for a side looking to restructure in the summer. The 35-year-old has already seen off the threat of 12 managers at Stamford Bridge, from Claudio Ranieri to Andre Villas-Boas, but the signs suggest it will be an unlucky 13. If, as is expected, Antonio Conte is appointed as Jose Mourinho’s permanent successor in the summer, the Italian’s first decision will be whether to award the club captain a new contract or usher in a new era and wave Terry goodbye. Frankly, England’s lion is no longer the leader of the Stamford Bridge pride. It’s time to go, Mr Chelsea.

Also, if the central defender is to leave, the title of longest-serving Chelsea player would then be bestowed upon John Obi Mikel, which would be glorious. That alone would justify the decision.

Seven Liverpool players make more Premier League tackles per game. 11 make more interceptions. Seven complete more dribbles. Six have more shots. Seven make more key passes. 12 players boast a better pass success rate. Six have scored more goals. Four have more assists. Henderson is the personification of ‘jack of all trades, master of none’. He is the 7/10 leader at a 9/10 club. He will be 26 at the start of next season; will he really progress any further?

Wayne Rooney
‘Does anybody else have the sneaking suspicion that there’s a potentially rather good, exciting, fluid and young United team waiting to emerge at Old Trafford?’ asked a giddy Monday morning Mailbox. The excitement over Anthony Martial, Marcus Rashford, Jesse Lingard and Marouane Fellaini is palpable.

Then those familiar fears return. That sinking feeling in the pits of stomachs. The resignation that there is nothing you can do but watch for the inevitable horror. It is not a question of where Wayne Rooney fits in this Manchester United team, but where everyone else fits around him. By Louis van Gaal’s own admission, the captain is a guaranteed starter. But United look considerably better without the 30-year-old weight around their necks. In Rooney’s absence, 18-year-old Rashford has been handed an opportunity. The 18-year-old has since scored five goals in eight games. Rooney has eight goals in 26. Captain fantastic.

Fabricio Coloccini
“Just because he [Coloccini] is captain doesn’t make him a leader. As far as I’m aware and seen, he’s not a leader and never has been,” was former Newcastle player Rob Lee’s frank assessment of the club’s current captain in February. The Argentinean was largely culpable for the club’s battle against relegation in the 2014/15 Premier League season, and many suggested his time at St James’ Park would come to an end after eight long years. The 34-year-old made no secret of his desire to leave. His reward was a new one-year contract, with the added option of a further year. Whether it is Rafael Benitez or otherwise, Premier League or Championship, it is an option which should go ignored. The central defender has carried his abhorrent form into this troubled season, and it is difficult not to draw parallels with a certain other Argentinean, just over a year older, and labouring through his final years in English football at a Manchester club. As the old saying goes: If you’re replaced by Jonjo Shelvey as on-pitch captain, your time is up.