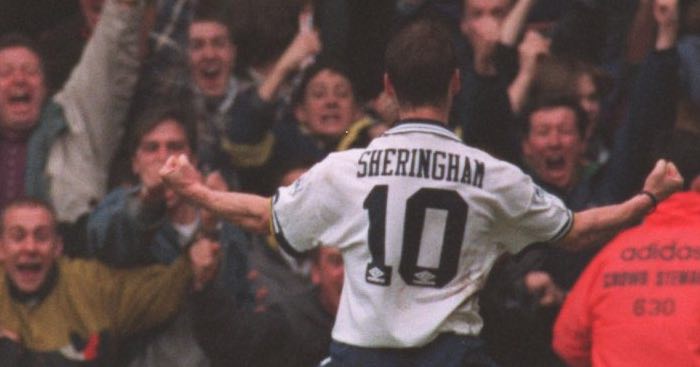 The Premier League is held up as a league of tumultuous counter-attacking, with players unable to catch a breath between one phase of play and another.

This sometimes tempts clubs to opt for pace in the transfer market – often to their detriment. We previously picked out five Premier League players with pace but little else…

So we know that pace is by no means a guarantee of a successful Premier League career. But here is irrefutable proof that you can thrive and flourish without it.

Dimitar Berbatov
There are a select few footballers at the highest level who can get away with not doing much at all. At Tottenham, Dimitar Berbatov made a habit of it: he would barely break into a sweat as he sailed across the turf at White Hart Lane. A misplaced pass would be met with inscrutable looks and a shrug of the shoulders from the fans. Teammates would grow increasingly frustrated at his lack of effort and then roll their eyes as the aloof Bulgarian would inevitably deliver a moment of pure genius.

Dimitar Berbatov was something else 😎pic.twitter.com/vfCK3k92Tf

Berbatov joined Manchester United from Spurs for £34million in 2008. A record of 48 goals in 108 Premier League games was solid but it was at Old Trafford that his shortcomings were highlighted. Used to the hustle and bustle of Wayne Rooney, Carlos Tevez and Cristiano Ronaldo, United fans were critical of the achingly cool playing style of Berba.

Berbatov’s own agent later admitted that he was “too slow to play for United”. He joined Fulham at the end of the 2013 season and continued his saunter around Craven Cottage and was again idolised by a set of supporters.

Michael Carrick
People often didn’t know the importance of Michael Carrick until he wasn’t in the team. Low-key and unassuming, Pep Guardiola, former manager of both Sergio Busquets and Xabi Alonso, described him as “one of the best holding midfielders I’ve ever seen in my life, by far”.

13 years ago today, Michael Carrick made the move from Spurs to #mufc 🔴

He dictated the majority of the games that he played in, effortlessly keeping possession and always looking for the forward option. His lack of pace was rarely exposed as his positioning and reading of the game was second to none. But while similarly sluggish players like Busquets, Alonso and Andrea Pirlo received their reverence while they were playing, Carrick’s stock seemed to soar once he had hung up his boots. Fans of West Ham, Tottenham and particularly Man Utd knew his worth to their teams, but just 12 competitive caps for England suggests this Premier League great didn’t quite receive the kudos his talent merited.

Gary Neville was one of several Man Utd old boys to bang the drum for Carrick: “Listening to some good rock is good and you like that too but sometimes it’s nice to listen to a piano. Carrick’s a piano.”

Cesc Fabregas
Nicknamed ‘The Master’ by former Chelsea teammate Eden Hazard, Cesc Fabregas has the second most assists in Premier League history. A defence-splitting ten yarder or a cross-field diagonal, Fabregas would play balls that some of the greatest Premier League players wouldn’t even have seen – his passing range only matched by his vision to spot the Thierry Henry, Lionel Messi or Diego Costa in space.

A graduate of Barcelona’s La Masia academy, Fabregas moved to Arsenal and became captain at just 21. He was compared unfavourably to Patrick Vieira initially – and ludicrously. Fans of Arsenal and the Premier League would soon learn to appreciate the guile and technique of the Spanish technician as he carried the weight of the Gunners on his shoulders for much of his eight-year spell at the club. His relative lack of power and speed was more than compensated for by his eye for a pass and desire to score goals from midfield.

The Spaniard won three domestic leagues at Barcelona and Chelsea and provided assists for Andres Iniesta’s extra-time winner in the 2010 World Cup final and the opening goal of the European Championship final in 2012. Not bad, all in all.

Teddy Sheringham
Never has the cliché of a footballer not requiring pace because “the first yard’s in his head” ever been used so often or so aptly as in describing Teddy Sheringham. A man most remembered for two touches in the 1999 Champions League final, Sheringham retired at the age of 40 after a career spanning three generations.

📐 This chip from Teddy Sheringham was measured to perfection against today’s opponents back in 2000! pic.twitter.com/MgMOZlCDGk

His 16 seasons in England’s top flight saw pace become a commodity of ever-decreasing value. Sheringham had to rely on his first touch and nous to lose defenders and create space that other strikers could manufacture with sheer athleticism. Premier League fans reserve a special place of prominence for thinkers like Sheringham – those with a yard in the head and a key in the pocket to unlock any defence.

Tom Huddlestone
Tom Huddlestone has had a less glittering career than his esteemed colleagues on this list. Now plying his trade at Derby County in the Championship, he enjoyed his most successful spell at Tottenham, where he played a vital role in their qualification for the Champions League in 2010.

He didn’t/doesn’t have the vision of Fabregas or the control of Carrick. Huddlestone’s most memorable asset was his ability to strike the ball. He was by no means a great goalscorer – Huddlestone once went three years without getting his haircut after he was dared not to have it cut until he next scored, raising over £70,000 in the process.

His stats show why his trips to the barber were so infrequent – just 12 Premier League goals doesn’t suggest a great goalscorer, but he was certainly a scorer of great goals. The ball wouldn’t rotate as he struck it; that Nike logo would remain motionless as the ball either flew into the corner or miles over the bar.