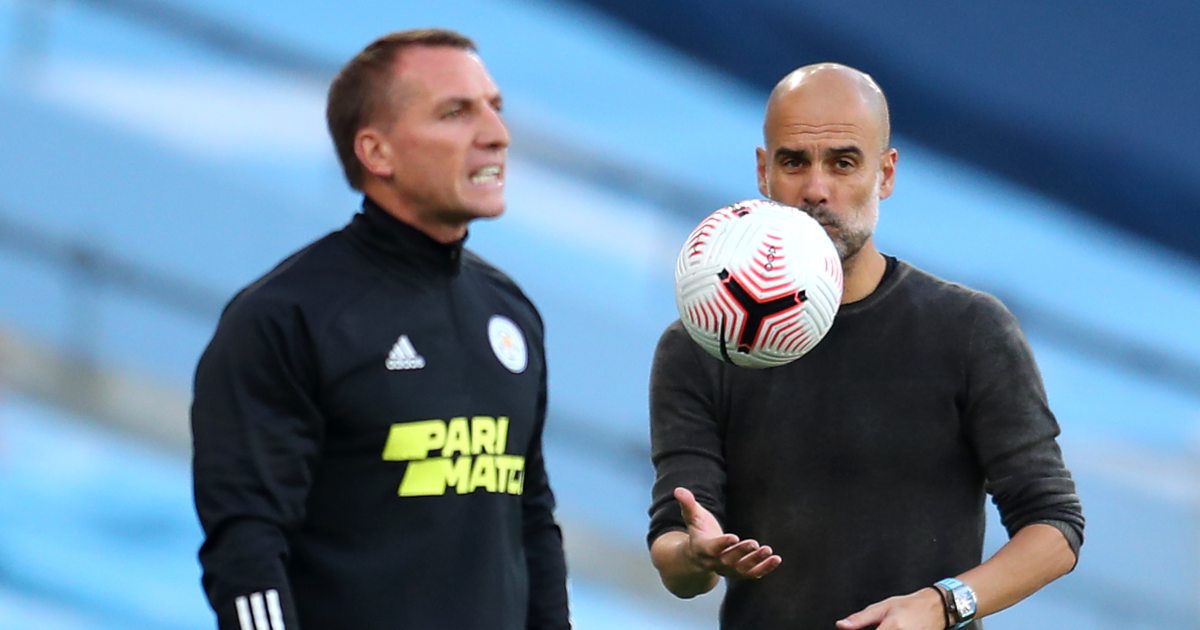 There’s an obvious choice for manager of the year but there are others – Brendan Rodgers might just claim it if they reach the top four.

Pep Guardiola (Manchester City)
Right, let’s clear up the obvious candidate first. Much like last year’s shoo-in for Manager of the Year, Liverpool manager Jurgen Klopp, Pep Guardiola is the frontrunner to take this one. You could not have predicted this in September, when City made a pretty ordinary start to the season, suffering something of a hangover from last season’s lifeless title defence and the Champions League embarrassment against Lyon.

But the winter months revitalised Pep’s players, who got their insatiable will to win back, with the likes of Ilkay Gundogan, Riyad Mahrez and new boy Ruben Dias playing at hitherto-unseen levels. Guardiola’s long-recurring wet dream was realised as the former Barcelona man told the likes of Gabriel Jesus and the outgoing Sergio Aguero to jog on, essentially fielding six midfield players and no recognised forward.

This kind of mad, free jazz style is the essence of Pep and to see these marvellously talented footballers interchange, rotate and retain the ball like their life depends on it is really quite something. We’re yet to see whether Guardiola’s free jazz approach will bear fruit in the Champions League final this month, but you’d be silly to back against them.

Thomas Tuchel (Chelsea)
Wow. That’s the only word to describe Thomas Tuchel’s Chelsea tenure so far, after only being in the job for a few months. The German was unceremoniously dismissed by perennial baddies Paris Saint Germain at Christmas (the heartless bastards) and then eventually parachuted in to put Bambi Frank Lampard out of his misery. He’s done an incredible job thus far.

Proof that perception is everything and charisma goes a long way, the affable former Dortmund coach has utilised a 3-4-3 system, which Chelsea fans often grumbled about as Antonio Conte persisted with a three-man defence in his second season. He’s also opted for a rather methodical, possession-hungry style where his team maintain stability by sterilising the game. The old ‘they can’t score if we have the ball’ approach which earned Maurizio Sarri such plaudits as ‘F**k Sarri-ball’ has been lauded this time around.

Granted, Tuchel’s men did lose the FA Cup Final to plucky underdogs Leicester – currently above them in the league at the time of writing. But with top four looking likely and a Champions League final on the horizon, it’s looking as though Tuchel will have raised the expectations for next season quite significantly.

To be in the top 20 clubs in the world for revenue and have to appoint David Moyes to save your season once is careless. To do it twice is negligence. West Ham are a club under anti-leadership.

Keeping the Hammers up last season was job done. This season has been an unbelievable campaign, with the Hammers climbing well above expectations into a race for the Champions League spots. Moyes has ditched the players he doesn’t fancy and improved the ones he does, with the indefatigable figure of Thomas Soucek bullying the opposition into submission, the full-backs creating ludicrous chances every game and Jesse Lingard turning into some sort of cockney Rivaldo for half his half-season on loan.

West Ham are suddenly a shining beacon of optimism for clubs all the way down the league that maybe, just maybe, next season could be more fun than the last. The team has Moyes’ fingerprints all over it and they’ve been able to unsettle teams who are individually much better through sheer persistence and being an utter nuisance from set-pieces. No team in the league has scored more from dead ball situations than West Ham (15).

Perhaps most impressively, Sebastian Haller’s January move to Ajax left them with no conventional centre-forwards. And many claim that Moyes has little in common with Guardiola. West Ham may just fall short of the top four, but to denigrate their achievements this year would be daft.

Marcelo Bielsa (Leeds United)
Leeds are doing well. Put plainly that is the most remarkable thing about Marcelo Bielsa’s Leeds this season. The so-called Godfather of modern coaching has effectively taken the sting out of what could have been a nervy, long-awaited return to the Premier League.

Leeds have coasted in mid-table and beyond for the entire season and their lack of peril has been incredibly impressive and shockingly underplayed. The oft-cited ‘Championship squad’ is slightly offensive and kind of untrue, but many of these players have been coached well above what was thought to be their ceiling.

Bielsa’s summer business blended last season’s tight-knit promotion-winning squad with a few new signings that have improved the level of quality overall. Unbeaten against the ‘Big Six’ at home this season, but perfectly capable of being tonked by Brighton or Crystal Palace, you can’t ever be certain of what Leeds will offer, but you know it’ll be a joy to watch.

Maybe the most telling sign that the professorial Argentine has transformed the culture and feeling of the club, the city and the fanbase with a flick of his wand can be found in the sheer horror whenever his potential departure is mooted. I’m sure the club has a solid, post-Bielsa plan in place, but his magic touch would be hard to replace.

Brendan Rodgers (Leicester City)
Brendan Rodgers’ flying Foxes have been superb and, barring an almost unimaginable fall at the finish line, they’re going to be playing Champions League football next season. For the former Celtic manager to pick his players up after last year’s nightmarish, final-day falter and go again is remarkable. For them to pick up the club’s first ever FA Cup trophy along the way is bloody brilliant.

Jamie Vardy, last season’s Golden Boot winner, has ran himself ragged for the good of the team even as his goal contribution has dipped, clearly motivated by Brendan Rodgers, who has become thoroughly likeable after the Brent-lite we had to endure at Liverpool.

The players clearly like and respect him immensely. He’s improved squad players and has nurtured some brilliant young talents like James Justin and Luke Thomas. He’s got the most out of new signings like Timothy Castagne and he’s even revitalised some apparent flops, the recently lethal Kelechi Iheanacho being one.

Rodgers’ name will seemingly always appear towards to the top of the odds on any potential vacancy at a ‘big club’ and it would be naïve to believe he doesn’t fancy a second go at that challenge at some point. For now though, why would he leave Leicester where the owners back him, the squad is brilliant and the good times could carry on?