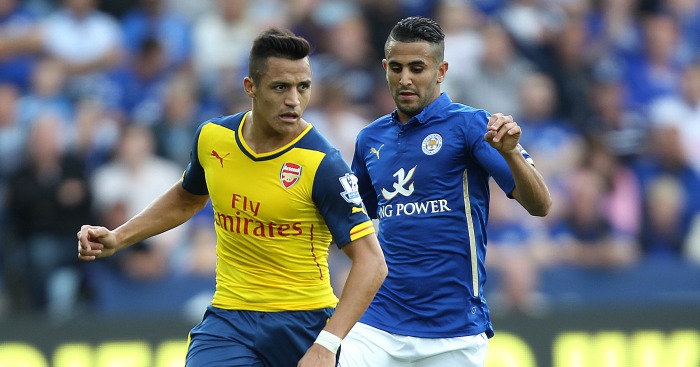 Romelu Lukaku (Everton)
Regular readers of Football365 will need no reminder of the ridiculousness of Romelu Lukaku’s consistency. This is a man who has scored 79 Premier League goals in less than five seasons; only Sergio Aguero can beat that total, and he has not been relying on Aaron Lennon, James McCarthy and Kevin Mirallas for creativity. And Romelu Lukaku – Daniel Storey will never let you forget – is still only 23.

If you are your club’s record Premier League goalscorer and you have been there for less than four years then you are probably batting below your weight. Lukaku is in a gang of three with Harry Kane and Andrea Belotti across Europe’s leading leagues in being a) quite young and b) very prolific, and both he and Belotti are now ready to join Kane in playing Champions League football. Everton have been good for Lukaku and Lukaku has been good for Everton, but he really could and probably should do better.

Riyad Mahrez (Leicester City)
Yes, he is as culpable as anybody for the ludicrous slump in Leicester’s performances and thus results in the Premier League, but you sense that there was a point – possibly as early as October – when Mahrez realised he had dropped a massive bollock in not pushing for a transfer to PSG or somewhere equally sexy when his stock was sky-high in the summer. He was a first-class, luxury player stuck in a flying bus and his considered response was to look a bit sulky.

Thankfully for Leicester and for his chances of a move this summer, he has delivered in the Champions League, with four goals and two assists in seven games to mirror his record in 25 Premier League matches. PSG or Barcelona may no longer be options but there will be many, many clubs across Europe who will seek to pluck Mahrez out of the bottom half of the Premier League, where he absolutely does not belong.

Alexis Sanchez (Arsenal)
For a fascinating analysis of Alexis Sanchez’s diminishing effort, you should read this from Adam Bate on Sky Sports, but the truth is that in terms of end product, Sanchez is way ahead of his teammates at Arsenal and, by some measures, ahead of everybody else in the Premier League.

35 – Alexis Sanchez has had a hand in 35 goals this season (21 goals, 14 assists), more than any other PL player in all comps. Priceless.

If you were top of that particular tree, would you be happy to be playing for a team in fifth who had just been humiliated 10-2 in the Champions League? This beautiful, chippy little bird needs to fly.

Michael Keane (Burnley)
The prices being touted are a tad ridiculous (are we supposed to believe that Keane and Middlesbrough’s Ben Gibson are both worth north of £30m before they have even played for England?) but, watching Keane against Liverpool on Sunday, it’s blindingly obvious that he is destined for far greater things than simply winning every other game at Turf Moor. Although understandably restricted to a ‘boots and braces’ job at Burnley, he has far more to offer, as his close relationship with mentor Rio Ferdinand would suggest.

Michael Keane looks a better player than Chris Smalling to me, but I could be wrong

Gylfi Sigurdsson (Swansea City)
There are statues and tributes to Dylan Thomas to be found across Swansea, but many would gladly see them replaced by figures of Gylfi Sigurdsson if he and the Swans continue to defy logic and somehow stay in the Premier League. A team in 16th really should not have a player topping this particular chart…

Most assists in #PL this season? @SwansOfficial's Gylfi Sigurdsson ???? pic.twitter.com/8aUgiDAUvz

Maybe he wasn’t ready for Tottenham at 23, but he may well be ready for Everton at 27. And then Swansea may have to ready themselves for the Championship; nobody else has more than two Premier League assists for them this season.