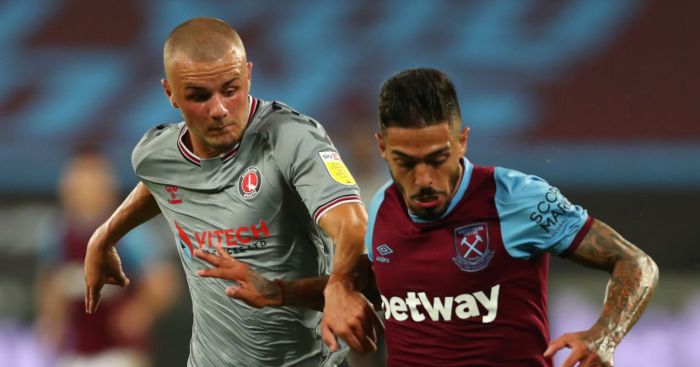 Two West Ham players gave hope for the future in the Carabao Cup. Steve Bruce described one Newcastle defender as “immaculate”. Not everyone made a cock of things…

Manuel Lanzini
A quiet first half followed by a lively, dynamic second with one GIF-worthy moment is about as much as a flair but fringe Premier League player could ask from a cup tie against lower-league opposition. It keeps you fresh in the mind of the manager and fans, as opposed to starting well but fading. And Manuel Lanzini was never going to dominate Charlton for 90 minutes, but his assist for the third goal will add to the clamour for him to feature more regularly for West Ham.

The 27-year-old started 14 Premier League games last season – only six in 2020 – with neither Manuel Pellegrini nor David Moyes fully trusting him for a variety of reasons. But Lanzini’s attitude at the very least seems positive and determined, while his quality has never really been in question. West Ham might as well give him a chance; it’s not as if he is going to be any worse than what he replaces.

Josh Cullen
And then there is Josh Cullen, who settled into a central-midfield role with ease and should surely be used more until he is sold to a direct Premier League rival to raise funds to sign James Tarkowski for £70m. The London Evening Standard reported in January that Moyes was already ‘impressed’ with a player who turned 24 in April and thus should not really be farmed out on loan any longer, so this was a fine start.

It was his pass that precipitated Sebastien Haller’s first goal, his range of passing that exerted control and his interceptions that helped keep a morale-boosting clean sheet. A first Premier League appearance for West Ham since April 2018 beckons.

Snodgrass, Lanzini and Cullen all better options as the third midfielder in our XI over Noble tbh

“He did quite well. He has waited a long time. And he’s another one who hasn’t really played any first-team football; I’m not certain he has ever appeared in a competitive match during my time. So another bonus.”

That is about as effusive as Roy Hodgson gets when discussing a player 53 years his junior. U17 World Cup winner Nya Kirby had indeed never appeared in a competitive match during his or any manager’s Crystal Palace time, with 70 solid minutes enough to get his foot on the door and his arse on the bench. Ryan Inniss, Jaroslaw Jach and Sam Woods were also great in a fine defensive display, so can share the honour of watching Jeff Schlupp play every conceivable position.

Jacob Ramsey
Played well enough to be adorned with words such as ‘mature’, ‘intelligently’, ‘dangerous’, ‘exciting’, ‘prospect’ and ‘moved’. The general opinion of the 19-year-old is that he was confident but by no means arrogant against a decent standard of opposition in Burton, showcasing both his range and speed of passing. A short loan at Doncaster earlier this year has done him the world of good.

Ramsey will not establish himself in the first team this season, nor will anyone in their right mind expect him to. But Dean Smith could be persuaded to keep him around the squad instead of fielding further loan offers from the Championship.

Ciaran Clark
Mark Gillespie was excellent in net but you wouldn’t ignore Nicholas Cage praising an unsung actor so one equally should not take Steve Bruce’s expert advice on centre-halves for granted. If he thinks Ciaran Clark was “immaculate” against Blackburn then Ciaran Clark was bloody well immaculate against Blackburn. The 30-year-old last played in February and has started 23 Premier League games since March 2018 due to injury but Jamaal Lascelles and Federico Fernandez had better watch their backs.