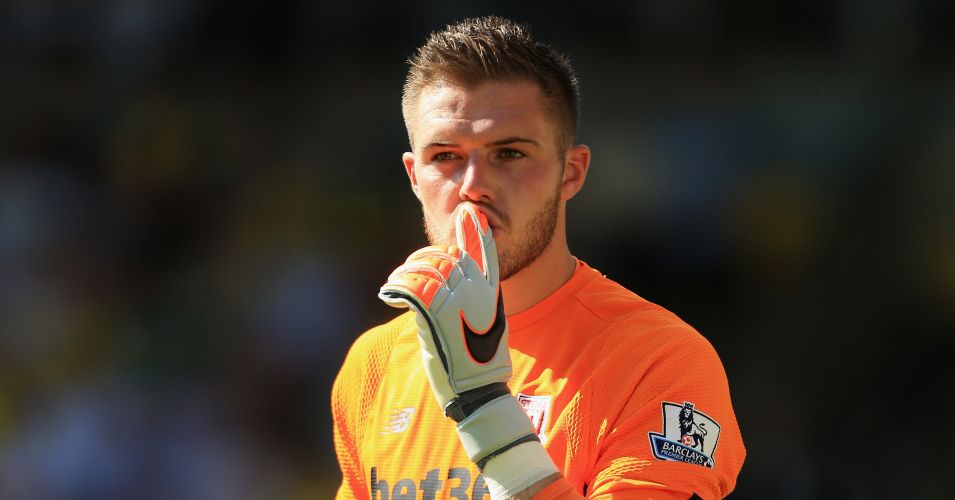 It’s not all about the Germans, you know…

Jack Butland
Jurgen Klopp has not made many mistakes at Liverpool. Imploring tens of thousands of fans to travel to Basel for the Europa League final, ticketless or otherwise, was one. Choosing to start Adam Bogdan in a Premier League game and expecting the goalkeeper not to throw the ball into his own net was another. Electing not to play Daniel Sturridge for a single minute in the Europa League semi-final first leg with Villarreal a third.

But handing Simon Mignolet a new five-year contract at Anfield is by far his gravest error thus far. While the previous three mistakes were quickly amended, Klopp must ensure his goalkeeping conundrum does not linger.

Examine the goalkeepers playing at the clubs above Liverpool in the Premier League. Kasper Schmeichel is solid but aided by a resolute Leicester defence; Adrian is not a spectacular player, but is experienced and reliable; Hugo Lloris, Petr Cech, Joe Hart, David de Gea and Fraser Forster are on a completely different level to Mignolet. The Belgian has regressed since his days with Sunderland.

Jack Butland, on the other hand, is very much still improving. Injury has curtailed an excellent season for the Stoke stopper, but he has risen to the challenge in his first season as a Premier League goalkeeper. The Potters conceded just 37 goals in 31 games before Butland’s cruciate knee ligament injury; they have conceded 17 in the following six without him. Stoke had not allowed four or more goals in a single league game with Butland starting, but have done so three times in his absence. While the England international has made 3.3 saves per league game this season (only one goalkeeper with 18 or more appearances makes more), Mignolet makes 1.9 – the fewest of any shot-stopper under that criteria.

Progression to two tournament finals has somewhat obscured the task that lies ahead of the German as he heads into his first summer transfer window. Klopp has already begun to mould the club in his own style, but there are glaring weaknesses he must address. Mignolet is the most pressing, and while Butland – a young, English player who is still developing – would be an expensive signing, it would be an astute purchase for both present and future.

Steve Cook
Before you exit this article in an alcohol-induced rage at the inclusion of the mainstay of a defence which has conceded 64 goals this season, just hear me out. This may represent Steve Cook’s first-ever season in the Premier League, he may have honed his defensive talents under Gus Poyet at Brighton, he may be just 25 and yet further from the England squad than Steven Caulker, Craig Dawson and Kolo Toure, and his last game before joining Bournemouth may have been with then-Conference side Mansfield Town, but, erm…

Alright, it’s a tough sell. In truth, Daniel Storey only suggested Cook because he had a pint with him once, and because he allowed Romelu Lukaku to score against him in November. But it is not a completely outlandish suggestion. A list of Liverpool’s current central defensive options reads: Dejan Lovren, Mamadou Sakho, Martin Skrtel, Kolo Toure, Lucas Leiva, Joe Gomez, Emre Can. Or: good, banned, not good enough, good but old, a midfielder, injured and inexperienced, no, please, never again.

Joel Matip will be added to that menagerie of players when he arrives on a free transfer from Schalke in the summer, but central defence is an area Klopp should look to reinforce. Limited as Cook is, he fits three crucial criteria: he is strong in the air, he is versatile and he has Premier League experience. The German’s only other defensive addition during his time at Liverpool – Steven Caulker – fitted the same profile.

The 25-year-old’s contract with Bournemouth expires next summer, and so the effect of his young, English player premium would be somewhat offset. It seems a rather peculiar suggestion at first, but is it really so outlandish? Heck, I’m not even sure anymore. Curse you, Storey.

Kieran Gibbs
A dog chasing a plastic bag on a windy day. An overzealous child who has had too much ice cream after dinner. The result of an experiment to combine the footballing DNA of John Arne Riise and Djimi Traore. Alberto Moreno is a riddle, wrapped in a mystery, inside an enigma, a defender who favours the curious belief of: ‘F*** defending, let’s run into this wide open space really fast because running is fun and I really like running, especially really fast.’

Thierry Henry noted back in December that the Spaniard “is looking like Roberto Carlos on the left flank from back in the day”. The Sky Sports pundit’s opinion licence ought to be revoked as a result. A comparison between the two can be drawn with regards to their natural attacking instincts, but Moreno would be honoured to reach even half the level of the Brazilian at left-back; he would be blessed to boast thighs half the circumference.

Jamie Carragher identified two areas of weakness where Liverpool must look to improve this summer back in February. Simon Mignolet was one; Moreno was the other. “The left-back has to come out of the team,” said the Reds legend. “This is not a one-off today in terms of the goal.” Moreno had just made a grave error in the Capital One Cup final penalty shoot-out defeat to Manchester City, the sort of mistake which has permeated his game.

There is a feeling that Moreno is not only a child trapped in a man’s body – he is the perfect replacement for Jose Enrique in so many ways – but he is a winger caught at left-back. Were Klopp to scout the Premier League for an alternative, he would struggle to find inspiration. Aaron Cresswell would cost too much, as would Ryan Bertrand. Both turn 27 before the end of the year. From there, it is a much of a muchness for viable left-back signings.

Kieran Gibbs is rarely the answer, but perhaps this is the exception to the rule. Arsenal are willing to sell him, he is willing to leave, and he desperately needs a fresh start at a new club. Although an attacking full-back himself, Gibbs is more able to curb his instincts and defend when necessary, a trait Moreno sorely lacks. While the 26-year-old has started only two Premier League games for the Gunners this season, he has featured in 126 league games over the past decade. It could be a deal which suits all three parties.

Cheikhou Kouyate
Had Brendan Rodgers got his own way, Anfield would be a different place; it would be a much sadder, much less endearing place. The Northern Irishman sought to sell Lucas Leiva in August, with a deal for the Brazilian to leave having been agreed. Forget the send-off witnessed at Upton Park on Tuesday, just imagine the farewells, the 20-page newspaper pull-outs, the tributes, the bottles hurled at coaches, the sheer outpouring of raw emotion had Lucas departed Merseyside.

Rodgers eventually relented, and Lucas remained. “Lucas is our best defensive midfield player,” the manager damned with the faintest praise after a 0-0 draw with Arsenal in August. Replace ‘best’ with ‘only’, and the message was the same. Emre Can, Joe Allen, James Milner and Jordan Henderson have their advantages, but none are holding midfielders by trade.

“I would have liked to have seen them sign a defensive midfield player, with Steven Gerrard having moved on,” Carragher told Sky Sports in the summer. “Emre Can can maybe step in there and you still have Lucas Leiva, but it looks like a position that Liverpool need to fill, and it is one that I am slightly surprised they haven’t given their defensive record over the last few years.”

It is a defensive record Liverpool have failed to improve. They have conceded 48 goals in 36 games this season; West Ham, who have played 37, are the only team in the top seven to allow more. The Reds conceded 48 goals in a campaign of underachievement last season. A defensive presence in midfield is needed, and Cheikhou Kouyate could be the solution.

Hammers midfielder Kouyate has made more tackles this season (91) than any Liverpool player except for Lucas (105). He has made at least 16 interceptions more than the best Reds player. James Milner is the only player to make more blocks (60 to 59). Only two players have conceded more fouls (34), and no player is fouled more often (39). Kouyate is the powerful physical presence Liverpool require in midfield, and he even provides a goal threat. Roberto Firmino, Christian Benteke, Daniel Sturridge and Philippe Coutinho are the only Liverpool players to better Kouyate’s five league West Ham goals this season. The Senegalese would be an astute signing at 26.

Nathan Redmond
‘Like a new signing’ is presumably how Lazar Markovic will be described this summer. The Serbian winger will return from his season-long loan at Fenerbahce to become the final member of this Liverpool squad to receive a bear hug from a beaming Klopp. It is not too often that a 22-year-old footballer worth £20million strolls through the door eager to prove a point. We’d forgotten all about Markovic, and yet he is capable of strengthening a key position in which Liverpool are woefully short: the wing.

Adam Lallana, Coutinho, Firmino, Milner, Allen and Danny Ings. None of those players who have started a Premier League game out wide for Liverpool this season are natural wingers. Jordon Ibe and Sheyi Ojo are the exceptions in that regard, but both are young, inexperienced and have an awful lot of developing to do.

Even with Markovic’s arrival, the signing of a winger is likely to be high on Klopp’s agenda. If Norwich suffer an expected relegation to the Championship, Nathan Redmond could be the ideal purchase.

There have been few reasons for positivity at Carrow Road this season, but Redmond’s continued progression is most certainly one. The 22-year-old has been one of the club’s stand-out performers. Having started just 22 Premier League games, he is their joint-top scorer with five goals from the wing. Adept at playing in any of the three positions directly behind the striker, Redmond would slot seamlessly into the Liverpool attack. Used with decreasing frequency by the relegation-embattled Canaries in their battle for survival, the England youth international is certainly an excellent player at the wrong club. Liverpool could be the perfect fit.