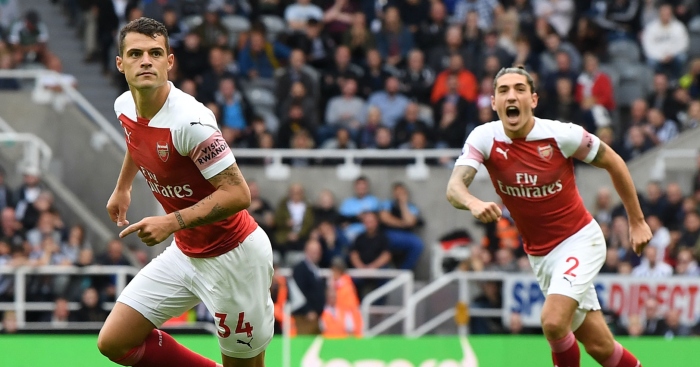 Granit Xhaka (Arsenal)
The headline might be a tad misleading because actually, Granit Xhaka has been revitalised by Lucas Torreira; it turns out that putting Xhaka – a man once encouraged not to tackle by Arsene Wenger – next to a genuine defensive midfielder is the key to releasing his potential. But we have to give Unai Emery immense credit for buying exactly the right defensive midfielder to dovetail with Xhaka. The pair have started five Premier League games in central midfield together and Arsenal have dropped just two points in those five games. He was immense against Liverpool, earning a place in Xhaka cynic Daniel Storey’s Winners and Losers and in our Team of the Week.

Xhaka was absolutely superb today. His only sub-par performance since Torreira has been introduced was at left back, in a game in which he scored. He’s quietly proving a lot of people wrong. As for Lucas, I have to pinch myself every time that I remember that he’s only 22.

As Peter Goldstein wrote: ‘He was ridiculously good, moving quickly to the man, tracking runners like mad, anticipating opposing passes. The most surreal moment came in the 89th minute, when Liverpool won the ball and started a quick counter. Andrew Robertson got the ball on the left and sent in a cross, and there was Xhaka rising to clear with authority, like he’d been doing it all his life.’

Alvaro Morata (Chelsea)
“In the last month of last season I was down, down, down, down. I cannot be more down. When you touch the limit, the only thing you can do is to come back,” said Alvaro Morata this week in a revealing interview about the back injury which derailed his first season in English football. After a fine start, he ended last season with just 11 Premier League goals. Although injury was clearly a problem, so were the tactics of Antonio Conte, with Morata admitting in September: “It wasn’t my style of play and I suffered a little because of that.”

Since then Conte has given way to Maurizio Sarri and the possession-based football that suits Morata’s style. His two goals against Crystal Palace on Sunday – when he was excellent – have taken him to five Premier League goals for the season. That’s as many as Mo Salah, Anthony Martial and Alexandre Lacazette. Oh and more than Romelu Lukaku.

Michael Keane (Everton)
Michael Keane was awful last season. Like truly awful. But then last season Michael Keane was largely paired with the rapidly ageing Ashley Williams or the aged Phil Jagielka. Right now, Keane is part of a younger, healthier central defensive partnership with Kurt Zouma that a) has seen them concede just six goals in six Premier League games and b) is keeping even Yerry Mina on the bench. His performance against Brighton against Glenn Murray on Saturday earned him a spot in our Team of the Week.

Last season – with Everton toiling and Burnley flying – it looked like gruff defensive monster Sean Dyche was the only man who could wring a performance out of Keane, but Marco Silva’s eye for detail and hard work has clearly chimed with the former Manchester United trainee. As he said himself last month: “I think, consistently, it’s the best time I’ve had here.

“The new manager has obviously brought new ideas and he’s been brilliant. We know our roles exactly what we’re doing on and off the ball, so we’re really organised going into games.  Training is really hard and intense so I feel fit. I feel fitter than I did last season. All little things add up to you playing well.”

Difficult not to be impressed by Michael Keane's performances this season. Today is another example of the player Everton signed #EFC

Robert Snodgrass (West Ham)
West Ham chief David Sullivan once said his kids begged him not to sign Robert Snodgrass. Six months later – and 15 games without a goal – he was on his way to Aston Villa on a season-long loan that would have surely turned into a permanent move if Steve Bruce had managed to secure promotion. Somehow, he now finds himself as one of only four West Ham players to have played a part in every game this season, with his last three starts bizarrely coming in central midfield. He is not only creative but tigerish in his attempts to win back the ball.

“I’m working with one of the best managers,” said Snodgrass recently. “He’s won the Premier League and managed in La Liga and I can only learn from people like that. He’s been great with me, he’s always talking to me. That was the case from the off.”

Even Sullivan’s kids must now be impressed.

Hector Bellerin (Arsenal)
The improvement in Arsenal under Unai Emery is such that we could have included any number of players here – Alex Iwobi, Rob Holding and Alexandre Lacazette were considered – but we chose Hector Bellerin because we did wonder earlier this year whether he was Arsene Wenger’s biggest failure. One of Europe’s most promising right-backs had become ordinary under the Frenchman and, even at just 23, it felt like his best days were behind him.

He recently credited Wenger with being the greatest influence on his career but it’s telling what he said about Arsenal’s new manager and his coaching team: “Personally it’s more about improving tactically now and taking experiences game by game. The coaching staff are really good. They have people who analyse the game to the detail, for that it is important to listen to them and improve every game.”

It seems he is finally being coached as well as being encouraged. That can only be excellent news for Arsenal.

Hector Bellerin deserves a lot of praise today. He was passed fit at the last minute, and played with a heavily bandaged thigh, but contained one of the best left wingers around for most of the game. Very different player to the one we saw 12 months ago. #ARSLIV #afc