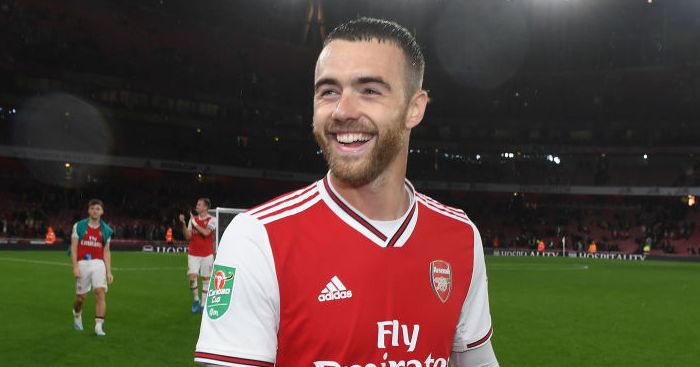 Calum Chambers
“I’m delighted Calum has extended his stay with us,” said Unai Emery in July 2018. “He played an important role last season and will be part of my plans this season.”

What the Arsenal manager failed to disclose is that his “plans” involved Calum Chambers taking his new Arsenal contract with him across the city to Fulham. But as strange as the apparent U-turn was, Emery’s justification that a second loan spell “will be an important part of his development” seems particularly pertinent.

While the 24-year-old added a second Premier League relegation to his CV at Craven Cottage, the boy returned as a man. A campaign that started with him featuring at centre-half included some brief sojourns at right-back before carving out a role in defensive midfield. Upon being named Fulham’s Player of the Season, the club’s official website described him as ‘one of our most popular ever loanees’.

And so to Tuesday, where Chambers was in sensational form against Nottingham Forest, assisting a goal apiece from either flank and balancing his new-found attacking instincts with a defensive resolve not often seen in these parts. His physical improvement in particular was eye-opening.

Rob Holding, Kieran Tierney, Joe Willock, Reiss Nelson and Gabriel Martinelli all impressed at the Emirates, but only one player was “amazing” enough to be singled out by the manager. He might well have earned a start against Manchester United in their 12-12 draw on Monday.

A lot of plus points from Arsenal’s romp v Nottingham Forest. 1) Calum Chambers man of the match. Must start somewhere in defence or holding midfield at Old Trafford. Really hungry focused and composed lately. 1/5

Taylor Harwood-Bellis
‘Man City already have a Harry Maguire-style centre back in Taylor Harwood-Bellis’ read the Manchester Evening News summer headline. But if one performance in a League Cup third-round game against lower-league opposition is anything to go by, the 17-year-old will surpass his new city brethren within a month.

The comparison carries little weight beyond height, of course, with Harwood-Bellis marrying obvious aerial prowess with calm and comfort on the ball against Preston. Only fellow central defender Eric Garcia completed more passes (90) than his 84, and his partner on Tuesday was making a fourth League Cup start of his career, having appeared in last season’s quarter-final and semi-final.

Pep Guardiola saw fit to praise both of his “exceptional human beings” after the 3-0 win, but for a player who only turned 17 this year, a professional first-team debut was a monumental step forward.

Regular Premier League football remains a distant objective, and Fernandinho will likely return by the weekend. But Harwood-Bellis at least justified his place in the central defensive queue, even if it is towards the back after pushing in front of Guardiola himself.

We all know Eric Garcia has world class potential, but Taylor Harwood-Bellis at 17 was brilliant. Two our finest CBs at the CFA.

Taylor so comfy on the ball and reminds me of Stones, but looks stronger physically..

Danny Ings
It’s safe to say that Danny Ings expected his Southampton career to go a little differently. His gentleman’s bet that he would outscore Mo Salah was “just a bit of banter” with no money involved, but a final result of 7-22 won’t have been great for his confidence.

There was a silver lining of 23 Premier League starts, a tally beaten only by his first campaign in the competition with Burnley in 2014/15 (35), and almost four times as many as he made throughout his entire Liverpool career (6). With those injury issues thankfully and hopefully behind him, the 27-year-old is looking to push on.

Ralph Hasenhuttl ensured to freshen his competition this season with the signings of Che Adams and Moussa Djenepo, but Ings has risen to the challenge. Two goals in the derby win over Portsmouth takes his seasonal tally to three with one assist and a respectable return.

Perseverance – and a quite wonderful first touch – laid on his first strike against Pompey, while the deft finish applied to Michael Obafemi’s excellent through ball made for a rather pleasing second, and a boyhood dream realised.

Hasenhuttl has started Adams as a lone striker and alongside Nathan Redmond in Saints’ last two Premier League games, with Ings afforded 16 and 13 minutes as a substitute. He will fancy his chances from the start against a panicky Tottenham on Saturday.

Starting a crowdfunder for a Danny Ings statue, who’s in #saintsfc

James Justin
Somewhat lost amid Leicester’s excellent start to the season is that continuity, not revolution, has been the key. The eight Foxes with the most minutes played were all at the club in 2018/19, with Ayoze Perez the only player in the top 13 to have been signed this summer – January arrival Youri Tielemans notwithstanding.

While Dennis Praet will need more than one Premier League start and one and a half League Cup games to prove that his purchase was not at least a little pointless, James Justin will be afforded a considerable amount of time. The 21-year-old joined under no pretences: two of the Premier League’s best full-backs are well ahead of him and Ricardo Pereira and Ben Chilwell would both take some shifting. The versatility of being able to play on either flank mattered not.

So it proved. Six Premier League games have passed with Justin acclimatising to the bench as an unused substitute in each. Even against Newcastle in the League Cup second round he watched on from the sidelines. But when former club Luton played host to Leicester on Tuesday, Brendan Rodgers gave him the nod.

A goal, four chances created, two tackles, two clearances and what the Leicester Mercury described as ‘a dream debut’ justified the call. The opportunities for such a naturally gifted and supremely talented player will come, particularly if he makes a habit of taking them in such an impressive manner.

Dominic Calvert-Lewin
The standard of the opposition will likely be used as a stick to beat him rather than praise him with. There always tends to be an asterisk next to the name of Dominic Calvert-Lewin, who is constantly willing but not always able.

Perhaps a Premier League defence would not have afforded him the freedom of Hillsborough to score his first goal, nor would they have suffered the lapse in concentration that preceded his second. But Calvert-Lewin showcased both a fine touch and unstoppable finishing technique, as well as an awareness and instinct to put Everton through to the next round.

It will take more than that to convince many of the sceptics, but only a fool would suggest the 22-year-old is responsible for a shoddy record at set-pieces and an inability to win away. Richarlison (17) and Gylfi Sigurdsson (15) are the only other Toffees to register double figures for goals in all competitions since the start of last season, with Calvert-Lewin – who neither cost upwards of £35m nor has been allowed to settle into one position – on 11.

Whether he is part of the solution remains to be seen – although every club tends to have a similar style of player in their ranks somewhere. But Calvert-Lewin is most certainly not the problem.

20 goals in 5k minutes by the age of 22 for Dom Calvert-Lewin. Many of them minutes coming in wide positions, as a sub, at an incredibly young age + in bad Everton teams.