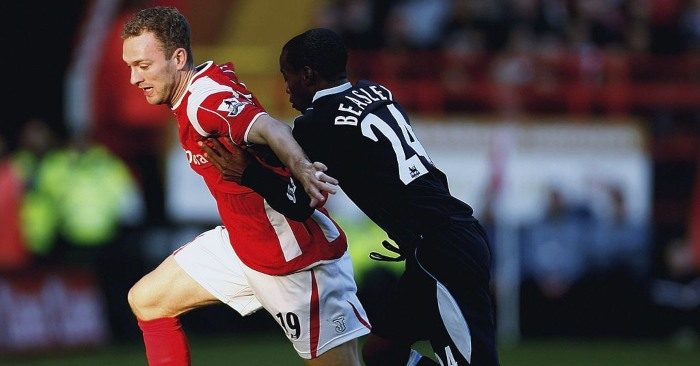 Daniel James burst on to the Premier League scene with the fourth goal in the opening game of the season against Chelsea and further impressed on his first start against Wolves.

The £15million man was signed by United because he is obscenely fast. Sure he can shoot, he can cross, he can press, but mainly – he is s**t quick.

What a goal from Dan James to give Swansea City the lead against Brentford. The Swans score twice in 4 minutes at the start of the second half and have turned things around. #FACup #SWABRE 2-1 pic.twitter.com/Zn3stSZxNJ

While James may go on to prove that he is more than a load of fast-twitch muscle fibres, there have been a number of Premier League players whose careers were legitimised by blistering pace. Pace that compensated for other less developed skills…

Dennis Rommedahl
Charlton boss Alan Curbishley was pictured in 2004 with his arms around the shoulders of Dennis Rommedahl and said: “With this guy we can go to the next level.”

In Rommedahl’s three seasons at Charlton Athletic, the Addicks went from seventh, to 11th, to 19th. Is that what Curbishley meant by ‘next level’? The Dane scored just four goals and made one assist in 75 Premier League appearances.

It’s fair to say the Charlton fans did not hold Rommedahl in the highest regard. They showed their anger and relief in equal measure as he forced through a move to Ajax after their relegation from the Premier League. Three years later he was scoring in the World Cup.

Dennis Rommedahl has looked better in 1 hour for #DEN v #CAM than in 3 years at Charlton. He seems to have gained pace aged 31!

To place the blame for Charlton’s demise solely at Rommedahl’s door is unfair and ridiculous – they knew what they were getting, after all. “He’s that fast Danish guy right?” Pro Evolution Soccer fans were nodding their heads; who else had acceleration of 90 and a top speed of 89?

Jesper Gronkjaer
The winger who scored Chelsea’s £1billion goal. Billed as the new Brian Laudrup – who had been at Chelsea for a season in the twilight of his career – Jesper Gronkjaer didn’t quite live up to the hype. Something of a comedy figure at Stamford Bridge, he was capable of the extraordinary but was more likely to be worse than mediocre. One attribute never questioned was his ability to run, and fast.

The last game of the 2003-04 season was a straight knock-out between Liverpool and Chelsea at Stamford Bridge; the winner would secure the last spot in next season’s Champions League. It was dubbed a £20million game but that figure would soon be dwarfed by the outlay of Roman Abramovich – persuaded to buy the club with the promise of Champions League football.

Gronkjaer joined Chelsea at the turn of the century and left just one year after the Abramovich takeover – forever a cult hero at the Stamford Bridge. All those fast, but bang average, performances forgotten with that curling effort into the bottom corner.

On this day: 2003 – Jesper Gronkjaer scored THIS goal for #Chelsea (vs Liverpool). #CFC pic.twitter.com/BgldoD6fjf

Adama Traore
‘No end product’ is a criticism that could be aimed at any player on this list. None more so than Adama Traore. A graduate of Barcelona’s famous youth academy, Traore joined Aston Villa in 2015 and did little to prevent their relegation in his debut Premier League season.

Lionel Messi, Andres Iniesta, Xavi Hernandez and the rest of Barcelona’s rondo brigade were schooled in the art of smothering the opposition with relentlessly mesmeric ball-hogging. It’s hard to imagine Traore standing on the wing like a wide receiver, waiting for a more technically gifted player to get bored with one-touch passing and spray the ball out to him like a quarterback, Traore sprinting by the full-back in the blink of an eye before aimlessly running the ball out of play for a goal-kick – white handkerchiefs waving in the stands.

Mind you, he didn’t half leave Luke Shaw and Harry Maguire in a pickle on Monday night.

Bebe
A young, raw winger from Portugal to be moulded into a Manchester United great. Be my Bebe. Signed a year after the departure of Cristiano Ronaldo to Real Madrid, Bebe joined David Bellion as being a spectacularly quick but crap signing by Sir Alex Ferguson. “I’m fast, I kick well and I score a lot of goals,” Bebe said upon signing for Man United in 2010. He was fast, but two goals – one in the League Cup and the other against the mighty Bursaspor in Europe – hardly constitute ‘a lot’. Which leaves you questioning whether he can ‘kick well’ either.

Signed for £8million by United – six loan moves and three transfers at a combined fee of £4.7million since then tells you all you need to know about the trajectory of Bebe’s career. It was downhill. And of course fast.

Shaun Wright-Phillips
This one might be unfair – 33 Premier League goals and 32 assists isn’t bad. 27 Premier League appearance in a winning year for Chelsea isn’t bad either. But you couldn’t help thinking that Shaun Wright-Phillips’ brain was always struggling to keep up with legs. He was the sort of player that would ‘do the hard bit’ but fluff his lines – round the goalkeeper and put the ball the wrong side of the post.

‘Knee-high to a full-back but quick, tricky and brave’ was one description used by a journalist certain that Wright-Phillips should be playing for England. He would go on to do that 36 times, battling with Aaron Lennon and then Theo Walcott for the ‘little fast fella on the right’ position.

I cannot stress enough how poor Shaun Wright-Phillips was today, though, absolutely awful. If he wasn’t quick, he wouldn’t be a professional