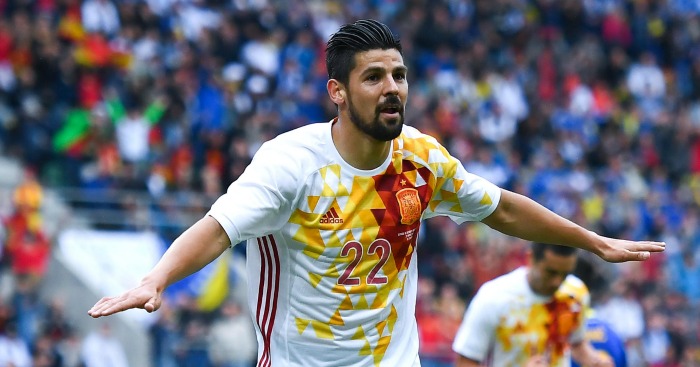 We brought you five European transfers you may have missed on Wednesday. Now, it’s the Premier League’s turn.

Matty Phillips (QPR to West Brom, £5.5m)
We bitterly regret not being at West Brom’s training ground on the first day back after the summer, and seeing the look on Phillips’ face when he’s picked by Tony Pulis in a training team with eight central defenders. “Bbbbut bbbossss, couldn’t I get a bit of help here?”

In fairness to West Brom, it was quite a coup to sign Phillips. The Scotland international was touted for more glamourous climes than The Hawthorns when QPR were relegated, but a season in the Championship has lowered that potential fee to the same one Newcastle will pay for fellow Scot Grant Hanley. That gives me a headache.

“There’s nothing like getting a full pre-season behind you,” said Phillips on Tuesday. “The gaffer’s pre-seasons are notorious now.” You just wait until you see his central-defensive modern art.

Marten de Roon (Atalanta to Middlesbrough, £12m)
At the end of every summer we look back on a list of names to have joined the Premier League, and our eyes settle on one or two that we can’t recall reading a thing about. This summer, that name will be Marten de Roon. What’s more, he cost £12m. Twelve million?!

There can be no bigger indication of the new broadcasting deal’s impact than this fee, the second highest in Middlesbrough’s history. De Roon is 25, has never really come close to the Dutch national team and moved for £1m only a year ago.

Some summers you get a song in your head, a cheery tune that nags away at you until you want to scratch out your brain (cheers Bob Sinclair). This summer all I can remember is Marten de Roon, £12m, repeated on loop until I see him play. Goodness gracious he better be good.

Havard Nordtveit (Borussia Monchengladbach to West Ham, free)
Nordveit’s deal was one of those sneaky ones that was announced so early it passed everyone by; May 16, to be exact. There is also a tendency to ignore free transfers as nothing more than squad signings who will sit on the bench for two years before joining PSV, Hamburg or Anderlecht.

This one might be different. Nordtveit, who had three years at Arsenal and so is used to life in England, started 27 Bundesliga games for the side – Borussia Monchengladbach – who finished fourth in the table despite a dreadful start. He also started four Champions League games last season and has 28 international caps for Norway.

Add in Nordtveit’s ability to play at right-back, centre-back and in central midfield, and you have yourself a very handy little freebie. Like condoms in Freshers’ Week (right, LADS?). Oh, I’ve still got one in my wallet.

Steve Mandanda (Marseille to Crystal Palace, £1.5m)
You have to hand it to Marseille; they really are trying to set themselves a challenge. In 2014/15 they sold Mathieu Valbuena, Jordan Ayew and Morgan Amalfitano. In 2015/16 they sold Giannelli Imbula, Florian Thauvin and Dimitri Payet. This summer they have sold Michy Batshuayi, Benjamin Mendy, Steve Mandanda and are in the process of selling Georges-Kevin N’Koudou. Eat your hearts out, Southampton.

In the case of Mandanda, Marseille’s loss is Crystal Palace’s gain. The goalkeeper represents an enormous step up from Wayne Hennessey yet cost just £1.5m, or 12.5% of a Maarten de Roon. No, I still can’t stop thinking about it.

Mandanda is 31, has 22 caps for France and has the experience of 74 matches in European competition (43 in the Champions League, 31 in the Europa). Bargain of the summer? Hell yes.

Nolito (Celta Vigo to Manchester City, £13.8m)
Manchester City beating Barcelona to the signing of a player with 25 goals and 20 assists in his last two league should be big news, but Nolito’s arrival in Manchester didn’t cause too much of a stir. That’s at least partly because it came slap bang in the middle of the Euro 2016 quarter-finals, when England was still mourning its exit from the Euros and the EU.

It’s also because Nolito isn’t a particularly sexy arrival. He turns 30 in October, and is expected to give Pep Guardiola strength in depth rather than become a certain first-team starter. Still, he has a handsome face, worked his way up through the lower leagues to play for Barcelona in 2010/11 and scored for Spain at Euro 2016. This *could* turn into something special.

Finally, lookalike time. Nolito looks like the lovechild of Graziano Pelle and Joe Ledley, a fact he should be truly proud of.