Home F365 Features Five untouchables who need to be dropped 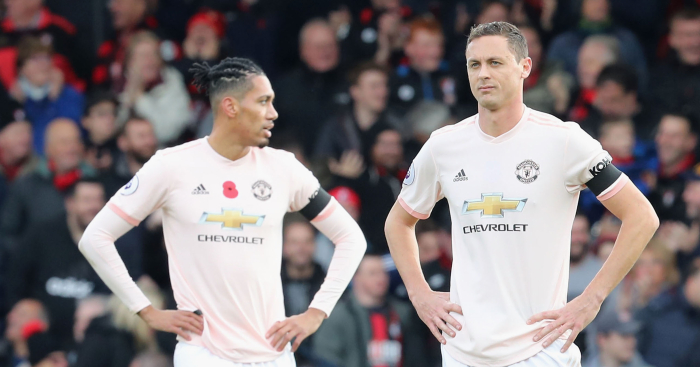 “It is not because I love them,” the Portuguese continued. “It is because of the way they play. Michael Ballack is untouchable because of the way he plays. John Terry is untouchable, Ricardo Carvalho, Ashley Cole, Drogba, they are untouchable.” With goalkeeper Petr Cech completing the set, there were effectively two positions Mourinho was willing to rotate in his starting line-up. The rest were, injuries permitting, guaranteed picks.

Eight years later, and after a spell away from Stamford Bridge, he opted against placing any particular players on a similar pedestal. “No, that team was a special team,” he said, reminiscing over his the machine that brought him his first two Premier League titles. “The players were in a special moment in their careers. This is different. For a manager, you want someone in your spine who is untouchable.”

Yet 12 months later, not even Mourinho could ignore the elephant that had strolled into the room and settled in the corner. Lukaku’s worst run of form since moving to Old Trafford in summer 2017 consigned him to a place on the bench against Everton, with a well-timed injury keeping him out of the squad against Bournemouth. The Belgian is “untouchable” no more.

That crown was instead passed to Nemanja Matic long ago. The midfielder missed the first two games of the season through injury, and was suspended for September’s draw with Wolves. Of the subsequent 1,080 minutes for which he has been available in all competitions, he has been absent for just 29.

Fans would argue that he has played considerably less, such has been his complete lack of impact. Matic at his best is a sensational defensive screen, a player capable of the short, sharp passes required to transition quickly to attack and punish any opponent. At his worst, he offers next to nothing, and is a midfield millstone weighing on the shoulders of his teammates.

Fred was punished for 11 poor second-half minutes when he was substituted against Bournemouth on Saturday, yet Matic is still being allowed to coast next to him. United have the £47m Brazilian, Paul Pogba, Ander Herrera, Marouane Fellaini, Andreas Pereira, Juan Mata and Jesse Lingard as options who can take the midfield wheel instead of sitting by and watching as a passenger. Even Scott McTominay, a player crucified for one bad game, would be a better choice right now.

As it is, Mourinho is still clinging to his safety blanket, refusing to release his iron grip. It is surely time for someone to stage an intervention.

James Tarkowski
How was your weekend? Get out much? Did you manage to relax, or were you dragged along to yet another family do? Has that pile of washing been left for a reason? Have you genuinely not done it just so you can accuse me of airing our dirty laundry? You always f***ing do this, you absolute waste of space. I want a divorce.

James Tarkowski has enjoyed better times. The 25-year-old was dreadful in the 4-2 defeat to West Ham, kindly unlocking and opening the door for the hosts to saunter straight through. It was really awkward as well, one of those where he completely misjudged the distance and so was left there for a solid minute or so as the Hammers took their time, thanked him and promptly slammed the next door in his face.

If Gareth Southgate wasn’t overly impressed with Tarkowski’s dawdling in possession to let Marko Arnautovic in for the first goal on Saturday, the second goal would have done it. The England manager will have seen the centre-half slice through Grady Diangana and been left wondering quite how he has been a regular part of his recent squads. That Felipe Anderson scored direct from the 20-year-old’s pass spared Tarkowski what would have been a certain red card.

How Burnley centre back James Tarkowski was NOT red carded for this abysmal blatant assault on Grady Diangana is a mystery?

Tarkowski managed to complete less than half of his 26 passes at the London Stadium, and was the only Burnley defender not to make a single tackle. Matthew Lowton managed eight, while Ben Mee and Charlie Taylor contributed four apiece. Not even Paolo Maldini would pretend that was through choice.

“Tarky is going to see a specialist this week,” said manager Sean Dyche after the game, although it will be for an apparent groin injury, not just for some much-needed defensive coaching.

With Ben Gibson still sidelined, the Clarets are short on options at centre-half. But Tarkowski has started each of Burnley’s last 21 Premier League games despite his recent sharp decline. Kevin Long cannot possibly be much worse.

Trent Alexander-Arnold
It started in March, when Marcus Rashford and Wilfried Zaha took turns as Trent Alexander-Arnold’s official babysitter. Jose Mourinho explained that his plan had always been to isolate the right-back in Manchester United’s 2-1 victory, while the Liverpool defender himself admitted Zaha “gave me a tough time” three weeks later.

Pep Guardiola took notice, but his tactic backfired spectacularly. Alexander-Arnold was sensational in both legs of Liverpool’s Champions League victory over Manchester City; Leroy Sane was completely nullified over 180 minutes.

Yet it has now become common for teams to target Alexander-Arnold as a potential chink in the Liverpool armour, as a rare point of weakness in this ever-improving side. Real Madrid tried to expose him in the Champions League final to no avail, while Paris Saint-Germain enjoyed a little more luck in the group stages of this season’s competition. But against Arsenal, Alexander-Arnold’s inexperience was again laid bare. He looked far off the requisite standard.

Iwobi with Kante and Ronaldinho skills in a few seconds sent Trent Arnold back to Liverpool academy. 🔥 pic.twitter.com/qJnGp51h2r

It is difficult not to have sympathy for the 20-year-old, for this is only his second full season as a regular first teamer. He is also being asked to play in a difficult position for a team constantly raising their overall levels, so it is understandable if he is struggling to match his teammates.

But if Liverpool keep raising the bar, the chances are that Alexander-Arnold will fail to clear it more often than not. He was the perfect right-back for them last season as they pressed relentlessly and attacked at will, yet the game has changed. Jurgen Klopp has placed more emphasis on control, and thus a far greater burden on his defenders.

Alexander-Arnold has already been dropped once this season, and does benefit from the fact that it requires a complete reshape of the defence to replace or rest him. Joe Gomez is his first-choice back-up, and is forming a fantastic relationship with Virgil van Dijk, while Nathaniel Clyne no longer actually exists.

That said, keeping your place in spite of poor performances is no way to develop. It does bear repeating that Alexander-Arnold is a phenomenal prospect, far ahead of those at a similar age, and considerably more experienced. But he is still just 20, and these growing pains are inevitable. Teams are targeting him for a reason, and Liverpool need to protect him.

Ryan Bennett
Steve Bull was by no means alone in suggesting that both Conor Coady and Ryan Bennett “will remain in the England conversation” if their strong performances continued. Speaking on October 18, the Wolves legend had seen both impress for a side sitting pretty in seventh, having lost just one of their opening eight games.

That conversation has now become an awkward silence, with Wolves losing each of their last three matches. If the defeat to Watford was a one-off, the loss at Brighton was a little more alarming. Tottenham completed the hat-trick of setbacks on Saturday.

The time for reflection and introspection is now. Nuno Espirito Santo has made just one change to his starting line-up in 11 matches, but the plan that was once working to great effect is no longer viable. Whether a predictable Wolves side have been figured out by the opposition or complacency has simply crept in, the onus is on the manager to right the wrongs.

He would prefer to bring in a more prolific striker, but Nuno must first make the most of the hand he has dealt himself. Bennett’s performances have been dipping for some time, and reached a nadir against Tottenham. They can be a difficult team to defend against, but not one that cannot be contained.

While Bennett toils on the right-hand side of a defensive three, summer signing Leander Dendoncker waits in the wings. The Belgian is more suited to the role of ball-playing centre-half, and can easily step into midfield when necessary. Time for Nuno to start using more of his new toys.

Wesley Hoedt
With 11 games played, Danny Ings is the only Southampton player to score more goals this season (4) than Wesley Hoedt. That both of the Dutchman’s strikes have ended up in his own net is scant consolation.

Southampton are not blessed with a brilliant squad. They do, however, have a solid enough Premier League spine. Ings, Manolo Gabbiadini, Charlie Austin and Shane Long have all proven capable of bringing barn doors and banjos closer together in the past, while Pep Guardiola praised a central midfield that looks far greater than it actually is before Sunday’s mauling.

They even have what looks to be a solid selection of centre-halves. Alongside Hoedt are Jannik Vestergaard, Jack Stephens, Maya Yoshida and Jan Bednarek, a whole £41m of defensive giants who were born to head a ball.

Yet Mark Hughes has made Southampton far weaker than the sum of their parts. Hoedt is the main culprit, the 24-year-old seemingly worth barely a fraction of the £15m they paid to sign him last summer. He has started 39 Premier League games for Saints – just over a full season – winning six, conceding 62 goals, and earning 33 points. That is relegation form that has stretched over two campaigns. Do not be surprised if this ship sinks when Hoedt is allowed to keep steering it.