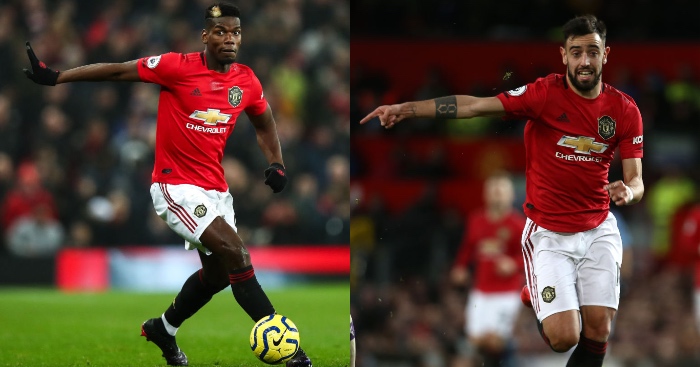 The Paul Pogba talk over the last 12 months has been excruciating. Despite not playing a minute of football since Boxing Day, and very little before that, the will-he-won’t-he speculation over a proposed move away from Old Trafford has been a near-daily occurrence, the inane hypothesising only letting up slightly after the signing of Bruno Fernandes in January. But rather than completely quelling the Pogba conjecture, the arrival of Fernandes has pushed the theories in a different direction. A direction that has prompted one of the genuinely intriguing questions ahead of a nine-game mini-season, that – if answered – could shape the future of Manchester United for years to come. Can Ole Gunnar Solskjaer get Pogba and Fernandes in the same team?

He must resist the temptation to throw both of them in and hope for the best – and The Athletic suggest he will avoid doing so for at least their first game back against Spurs on Friday. The pros and cons for playing both of them are obvious; he must weigh midfield creativity against defensive solidity. Here are five questions Solskjaer will need to answer about the Pogba-Fernandes midfield axis…

1) 4-2-3-1 or a midfield diamond?
Solskjaer’s preferred formation in games United are expected to win has been 4-2-3-1, with two of Nemanja Matic, Scott McTominay or Fred in front of the back four. And now, with Marcus Rashford and Pogba back fit, they can join Bruno Fernandes and Anthony Martial in what looks to be a frightening front four ahead of them. Frightening, but potentially very lopsided – more on that later.

Another option – reportedly tried out by Solskjaer in a training game last week – is the midfield diamond. In that game, McTominay played at the base of midfield, Pogba was deployed behind a front two of Rashford and Martial, with Fernandes to the right and Matic to the left. But Matic could just as easily sit, with Fernandes at the tip. This does rely on the full-backs getting forward to provide width, and for all the praise rightly aimed at Aaron Wan-Bissaka and Brandon Williams, they have just three assists between them in the Premier League this season.

But what the diamond does is negate the problem United are trying to solve through the continuous courting of Jadon Sancho. The utterly forgettable Daniel James’ early kick-and-run promise flattered to deceive – they don’t have a good enough option on the right wing.

First glimpse of the Paul Pogba and Bruno Fernandes link up today 👀 pic.twitter.com/d2INg831d7

2) Who plays on the right?
Getting Rashford and Martial in the same team has been difficult enough, with both forwards preferring to start from the left wing and drift inside. It has left one or the other being forced to play down the middle as a makeshift focal point for attacks heavily weighted from that left-hand side.

And while Rashford’s form before injury suggests Solskjaer made the right call in giving him free rein on the wing, with Martial down the middle, the signing of Fernandes and the return of Pogba – both of whom also favour the left – means their most talented front four could form a very predictable line of attack.

Fernandes is perhaps the most malleable of these players, and would likely be the man to start from the right in a 4-2-3-1, with Pogba in the middle, Rashford to the left and Martial ahead of them. But then playing your most influential creative influence out of position would be a strange move, especially given his astounding impact in the short time he’s been at the club.

3) Who misses out against the Big Six?
Against the Big Six, Solskjaer has opted for a 5-2-1-2 formation. This has led to arguably their best results of the season, including the 2-0 victories away at Stamford Bridge and – in the last game before the hiatus – at home to Man City, with United expertly using the pace of the front two to cause no end of problems on the break.

But Solskjaer faces a real problem trying to get Fernandes and Pogba into this formation. History has indicated that Pogba doesn’t have the commitment or desire to do the defensive work of a deeper-lying midfielder. Fernandes may be able to, but again this would mean greatly limiting the one man who can consistently open up opposition defences; he needs to receive the ball higher up the pitch to make the final pass and cause real damage.

They will more likely opt for McTominay and Matic in front of the three centre-backs and allow Fernandes a bit more freedom in front of them, leaving Pogba on the sidelines. But he’ll just take that on the chin, right? He’s a professional, after all…

4) Can Pogba make a good United team great?
To be fair to Pogba, it’s his abhorrent wretch of an agent that does most of the finger-pointing and tongue-wagging. Sniffing out any opportunity to stick the knife in, or big up his top client.

But there’s no doubt Pogba has an unjustifiably high opinion of himself; his inconsistency at United has been made all the more obvious by the stunning start Fernandes has made.

What we do know about Pogba is that he shrinks when times are tough – he’s not a player for a team to build around and can’t turn an average team into a good one. He’s not Steven Gerrard, But maybe he can make a good United team great.

5) What about Fred?
The Brazilian was the standout performer in a rudderless United midfield at the start of the season, and has shown that he is better than the very low standards he set for himself when he first arrived at Old Trafford. But everyone can stop pretending he’s brilliant now.

It’s understandable when everyone’s playing sh*t that you pick up on one player who’s playing less sh*t than they used to, but now United have the potential to be a very good side. And one key to that could be reducing Fred’s role.

McTominay is a United captain in the making, and his improvement has far outshone that of Fred in the same time period. And claims that Matic’s legs had gone in the early part of the season predictably vanished when the three-time Premier League winner fully recovered from injury, as his imperiousness on the ball and reading of the game was clear for all to see once again.

This is not to say Fred does not deserve to stay at United, but that he will struggle to get into their first team, as he always should have done.