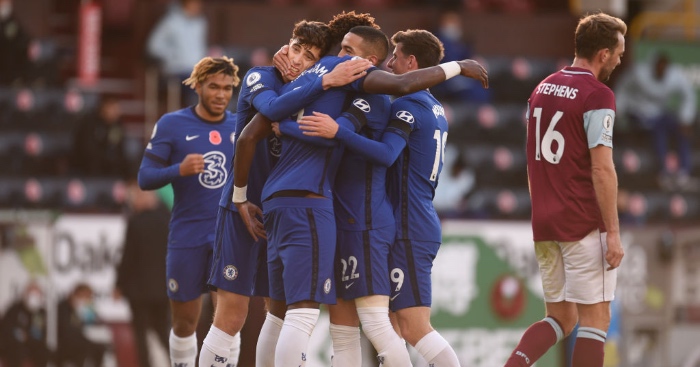 Just two weeks ago, Chelsea played Manchester United in a game tipped to draw a line in the sand between Ole Gunnar Solskjaer and Frank Lampard. A win for either would see one flourish and the other crumble. As it turned out, a dour 0-0 draw meant the exaltation and degradation had to wait. Not long, though.

A 5-0 win over RB Leipzig had the Solskjaer plaudits claiming superiority, but subsequent defeats to Arsenal and Istanbul Basaksehir suggest that was the exception rather than the rule. Lampard meanwhile, has seen his Chelsea side win three on the bounce, score ten goals and stretch their run of clean sheets to five in all competitions. While Solskjaer stares down a barrel, Lampard drinks in celebration from another.

But what can Chelsea achieve this season? The next significant step after securing Champions League qualification in the last campaign is to challenge for the title. Far-fetched? Maybe. But stranger things have happened. Here are five reasons Chelsea can win the Premier League this season. We’ll start with the obvious…

“Low maintenance” was the key phrase used by Lampard in the midst of high praise for his new goalkeeper, in stark contrast to the fragility of Kepa Arrizabalaga. In a football sense – not a lavish spending, vain, compliment-seeking kind of way – Kepa exudes a preciousness that doesn’t lend itself to being a Premier League goalkeeper.

While Kepa would get bunted around the area and throw his hands up in complaint as he came and flapped at crosses, Edouard Mendy plucks them out of the air, hassle-free, like Thibaut Courtouis and Petr Cech. Chelsea owe the latter a huge debt for championing Mendy and keeping him from dusting off the skull cap.

Kepa always looks quite good, not in the sense of being decent at stopping shots or dominating his box, but in the way that the camera loves him: diving full length to see a shot pass through, under or over him, pointlessly shouting at his defenders after making a relatively simple save.

Mendy just gets on with it, keeping the ball out of the net and relieving pressure by hook or by crook. Kepa is aesthetic; Mendy is effective.

One of the big concerns surrounding Mendy was his ability with the ball at his feet: a key trait for a goalkeeper for Lampard with the way in which he wants his Chelsea team to play. But he’s proven to be just as, if not even more accomplished in passing from the back, whether playing triangles in the box or driving the ball towards Ben Chilwell or Reece James on the flanks. Chelsea didn’t need to spend £72million to land their Alisson or Ederson. £22million was plenty.

We all saw it. We all knew Chelsea needed someone to change the fortunes of their ailing defence: frequently caught out of position in open play, shirking blame as they stood stock still at set pieces. And they got their man: Anthony Barry.

“He’s a student of football,” said Paul Cook when waxing lyrical over his former first-team coach at Wigan. “Frank will dip into whatever of Anthony’s qualities that he wants to bring to Chelsea, whether that’s on the training pitch, in the analysis room, set pieces – there are so many different aspects.”

It’s the change at set pieces that have been remarkable. Barry could be seen on the touchline against Rennes, barking out orders to the Chelsea defence, who suddenly appear to have an extra man in the box, consistently winning first and second balls, attacking crosses rather than defending men.

Thiago Silva has also obviously made a huge difference, at set pieces but just in general open play too, oozing calm authority and radiating a tranquility that has centre-back partner Kurt Zouma playing the best football of his career.

In the 3-0 win over Burnley – Chelsea’s best performance of the season – Lampard played N’Golo Kante at the base of a three in midfield, with Kai Havertz to one side and Mason Mount on the other. With Timo Werner, Tammy Abraham and Hakim Ziyech ahead of them, it was a side that attacked with predictable menace, but crucially, just as much solidity as when Jorginho or Mateo Kovacic are drafted into the side.

Kante was magnificent in that game. It was the type of virtuoso performance we formerly took for granted but have seen far too infrequently under first Maurizio Sarri and now Lampard. As the deepest midfielder, Kante was able to drive the press, forcing his teammates up the pitch as he did so. And we saw in him – for the first time in a while – the lung-busting, all-action, everywhere-ness that results in a heatmap like a rash prompting a sharp visit to the hospital rather than a bath and some E45.

The question is whether Lampard is brave enough – when Havertz returns from quarantine – to utilise this same system against better teams; whether he feels the defensive responsibility is too great for Kante with five other players on the pitch focused far more on attacking than tracking back. It would be wise not to doubt the wee man.

One of Lampard’s biggest gripes last season was Chelsea creating but not finishing. Along with individual errors it was a common theme through his exasperated post-match interviews. But too many of those ‘chances’ were half ones: balls put into an area in which a striker should be; players opting to shoot when the pass would be a better option.

It’s different now. Not necessarily more patient, or less probing, but smarter and ultimately more dangerous. Ziyech is pivotal to this. He’s a player with a picture in his mind, thinking about the state of play two passes ahead, picking up positions from which he can make key passes, deliver crosses or shoot.

But the key is in the way he picks teammates out, or at least tries to. A pretty whipped cross isn’t delivered with an expectation for someone to get on the end of it. He selects a recipient, takes aim, and if it doesn’t meet its mark it’s his fault, not his teammate’s.

Chelsea already have 12 different goalscorers this season. Timo Werner predictably leads the way with six, but there is danger everywhere, in all scenarios.

Again, we come to set pieces. Chelsea used to be king in both boxes. The likes of John Terry and Gary Cahill would shut the door at one end and bash it open at the other. When Chelsea last won the Premier League, under Antonio Conte in 2016/17, they scored 22 goals from set pieces. Last year, just 11. A corner for Chelsea felt like it was more likely to end in a counter-attack and a goal for the other team than a profitable situation to score themselves.

This has now changed. Through a combination of Ziyech and Chilwell’s superior delivery and mainly Zouma – who already has three goals this season – hurtling himself towards the ball, Chelsea are once again a real threat with bodies in the box.

It’s an extra layer of jeopardy to add to Lampard’s wealth of attacking riches in open play. We said one of Lampard’s biggest challenges this season would be keeping those players happy and so far he’s managed them well. Other than Olivier Giroud – who we always feared for – the load has been shared evenly enough to prevent speculation of snubs and loan moves and to motivate players when they do get a chance to impress.

Injuries and coronavirus issues here and there have eased selection headaches somewhat, but with similar problems likely to present themselves, a squad that looked top-heavy before the season started actually looks to be about right. And of course, brimming with quality.