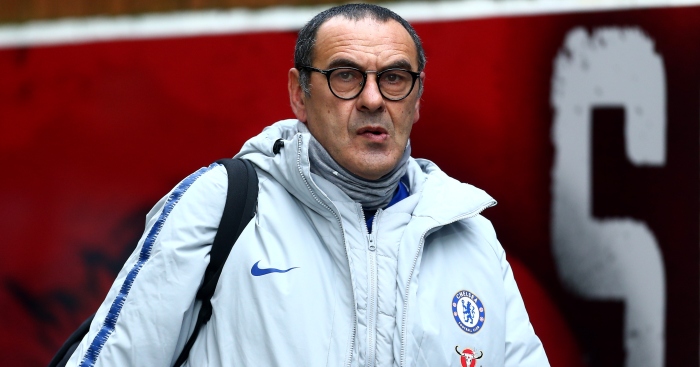 F*ck Sarri-ball indeed. Here’s why Chelsea should have seen this coming…

Chelsea’s motivation issues pre-date Sarri
“This group of players are extremely difficult to motivate,” said Sarri in an extraordinary outburst – made in Italian to be sure the message reflected his feelings- after the 4-0 defeat at Bournemouth. Chelsea then beat Huddersfield 5-0 at home in a gentle Saturday afternoon stroll at Stamford Bridge, after which the manager was still seething. “I hope in the future we will not need a lost match to find the right mentality.” Since then, Chelsea have lost 6-0 and 2-0 to both Manchester clubs to leave them outside the top four and out of the FA Cup. It is a problem that isn’t going away any time soon.

And Sarri is by no means the first Chelsea manager to have a hard time motivating this group of players. Jose Mourinho and Antonio Conte lost the squad’s attention in similarly swift and devastating fashion – and they both had a Premier League title in the bag to go with all their other honours to demonstrate that their methods do indeed work.

Sarri does not have that weight of evidence. The 60-year-old coach has fewer medals to put on the table than almost every player in his squad. In a dressing room notoriously choosy about when and for whom they graft, Sarri’s body of work is unlikely to impress many when it seems they have stopped buying into his blueprint for the future at Stamford Bridge. It is a wider problem in the game: if the players don’t fancy you, the manager is far more dispensable.

Chelsea have this to consider if and when it comes to appointing their next manager. What motivates the Chelsea squad? Honours? If that were the case, then they would have fought longer and harder for the two serial winners before Sarri. Style? Sarri’s methods are sexy enough to turn on Pep Guardiola. But not the likes of David Luiz or Marcos Alonso, apparently.

Sarri’s stubbornness is nothing new
Sarri-ball has been sussed, but that’s not motivation enough for the manager to consider tweaking his approach. “Why?” he asked when it was put to him after being thrashed 4-0 at Bournemouth that a Plan B might be worth considering. “I want to do well playing plan A. I don’t want to change something that at the moment doesn’t work very well. I want to see my football played very well.”

The Chelsea boss then pinpointed Barcelona as the example to follow because, apparently, it is just that simple. He doubled down on his determination to stick rigidly to his beliefs even immediately after Manchester City had run all over his Chelsea players: “My target is to play my football, it is not to change to another football.”

Sarri’s stubbornness is not a trait that he has recently developed. His Napoli side played the same 4-3-3 throughout his reign from immediately upon his arrival in 2015. Three games into his tenure, Diego Maradona passed his judgement on Sarri-ball: “I respect Maurizio Sarri but he is not the right coach for Napoli.” But, by the end of the season during which Napoli earned a record points haul, Maradona had been won over: “I was wrong about Sarri, I ask for forgiveness.”

The difference: the players at Sarri’s disposal. After Rafael Benitez’s methods, each one bought into the new manager’s approach, with the likes of Pepe Reina, Kalidou Koulibaly, Marek Hamsik, Allan, Jorginho, Lorenzo Insigne and Jose Callejon fitting seamlessly into Sarri’s jigsaw, in addition to Gonzalo Higuain netting 36 goals in 35 appearances.

This is a different type of group at Chelsea. Can they remedy that in time for Sarri to be a success? Probably not, no.

Chelsea’s structure still not fit for purpose
Despite the mentality concerns around this Chelsea squad, the club saw no need for an overhaul to give Sarri the working conditions that perhaps he would have wished for. Chelsea allowed Sarri to bring Jorginho from Napoli with him and the manager has clung to his central midfielder like a comfort blanket, even through the Italy star’s struggles to stamp his mark on the Premier League.

Otherwise, Chelsea bought a goalkeeper to replace one they had lost and a midfielder – Mateo Kovacic – they got as part of that deal. In the winter, he made clear his wish to replace Cesc Fabregas immediately but a midfielder wan’t forthcoming. The Blues got a striker – they could not afford not to – and one that is familiar to Sarri, which should enhance his attempt to stamp his mark on this team. But Higuain and Jorginho aside, Chelsea have gone for evolution when Sarri is aiming for revolution.

Conte consistently made it clear that he holds little sway over transfer decisions and the same applies to Sarri. Manchester United’s need for a sporting director has been made plain, but Chelsea’s need is equally great.

Sarri’s substitutions have always followed the same formula
The only things in life we can be certain of: death, taxes and Sarri’s subs. Like night follows day, Mateo Kovacic swaps with Ross Barkley, and Pedro exchanges places with Willian. In Sarri-ball, whether winning, losing or drawing, the shape stays the same and so too do the players within it.

It was the same last season. Piotr Zielinski and Marek Hamsik were Napoli’s Kovacic and Barkley, with Zielinski replacing Hamsik 17 times at an average time of 64 minutes. Marko Rog would follow later, with the midfielder coming on 28 times, most often as a like-for-like change, only three times before the 75-minute mark.

Chelsea fans less familiar with Serie A are entitled to feel exasperated at the predictability of their team’s changes but the club can hardly bemoan a lack of imagination because they must have known what they were getting.

🔁 Sarri has replaced Ross Barkley with Mateo Kovacic or vice versa 19 times so far this season (17 times in the PL & twice in the Carabao Cup).

Chelsea were warned over Sarri’s refusal to rotate
The Chelsea players aren’t too fond of hard graft. They complained of being left knackered by Antonio Conte’s training sessions, and already reports suggest they have made clear their unhappiness and exhaustion over ‘confusing, boring and repetitive’ training sessions.

But Sarri is making some work harder than others for their massive pay packets. Chelsea are the only club to have more than three players play over 3000 minutes so far this season. Sarri will probably suggest that there are too many others that he cannot trust to carry out his instructions, but Chelsea are not his first employers to grow frustrated about his lack of rotation.

Sarri has used 23 players in the Premier League this term – including fleeting appearances for Danny Drinkwater and Tammy Abraham – which is the same number Napoli played in Serie A last term. Only two clubs – both from Milan – used fewer players.

His refusal to rotate was just one of the sticks Napoli president Aurelio de Laurentiis used to beat his departing boss last May. De Laurentiis felt it was ‘inevitable’ that Napoli ran out of steam ‘if we always use the same players’. He also suggested potential recruits had swerved Napoli in fear of not playing.

Chelsea’s performances certainly lend credence to De Laurentiis’ warnings over rotation. Sarri will simply be hoping to stick around long enough to see if it affects the club’s recruitment.