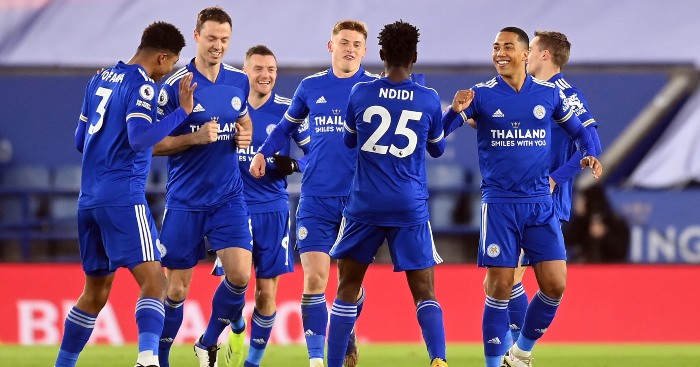 We’ve done everyone else, so we might as well tick off the latest table-toppers and perennial Big Six mockery-makers Leicester City. They really could do it, you know. It would be far less silly than in 2016, and here are some of the reasons why…

Brendan Rodgers
We’ve all had our fun with Brendan Rodgers down the years and all the daft and more-often-than-not self-aggrandising and self-mythologising things he’s said and done, but he’s proven himself a damn fine coach and will absolutely never be short of confidence and belief. Of course his side should challenge for the title; why wouldn’t they? He’s run rings around Jose Mourinho and Frank Lampard in recent weeks and, while one of those things is more impressive than the other, it’s testament to Rodgers’ often-overlooked qualities as a coach. Rodgers now boasts a wide range of coaching experience and is bringing it all to bear on a talented squad. We can all do without Paul Merson nonsense about how Jurgen Klopp, who took Dortmund from mid-table to back-to-back Bundesliga titles and ended Liverpool’s 30-year title wait, couldn’t do what Rodgers has done with a team who won the league five years ago. He could definitely match Rodgers’ achievement at Leicester, because he’s one of the very best managers in the world. But he probably wouldn’t do any better.

Jamie Vardy
For two reasons, really. One, and be ready for some quite startling insight and analysis here, because he scores a lot of goals. Only Salah, Son and Kane have more this season. But conversely, another reason Vardy is so key to Leicester’s very real title chances is that they don’t always need him to score lots of goals. Leicester have taken 11 points during Vardy’s current five-match scoring drought. That is better than two points a game and therefore, on this season’s evidence, title-winning form. Vardy is a streaky striker; he’s already had runs of five goals in three games and six goals in nine this season to go with the current drought. Last season a run of 14 goals in 12 games was followed by a seven-game fallow period and then another run of six goals in seven. Leicester are currently in the wonderful position of picking up points at a perfectly acceptable rate while safe in the knowledge another trademark Vardy spurt could arrive at any time. Point is: Leicester have got back to the top without any goals from their leading scorer and therefore have obvious room for further improvement. When Spurs or United or Everton or even back in the mists of time Chelsea put together runs that took them to the top, you felt they were pretty much playing as well as they possibly could to get there. Leicester, demonstrably, are not.

That squad
Which obviously has a great deal to do with the squad Leicester have compiled. Again, this is no secret or great revelation, but they are very good at the old transfer game. Bringing Timothy Castagne and Wesley Fofana in for not much more than they got for Ben Chilwell is spectacularly strong business and the sort of trick teams in Leicester’s position below the financial elite simply have to keep pulling off to compete. It’s helped that James Justin has turned out to be a better and far more reliable left-back than anyone could surely have dared to hope, but still. Looking back on Leicester’s 2015/16 title win, there remains a freakish, otherworldly quality to it that is hard to describe, but that would be absent from any follow-up this year. That title was won by a team; this would be won by a squad. There is so much more depth to Leicester now. They have defensive and midfield options fully worthy of the Big Six/Seven label Leicester themselves would have by now earned in a just world. In Leicester’s title-winning season, a first-choice XI all made 30 or more appearances. That’s unsustainable in most seasons, and certainly this one. Leicester have the depth to go with the quality.

Harvey Barnes
Barnes’ quality has been obvious for some time now but this year that talent and potential is delivering far more tangible returns. The wasted chances are fewer and further between, and he has already matched his goal tally from last season. His three goals in the last five games have covered Vardy’s stutter perfectly. Barnes and now also James Maddinson are taking on the scoring as well as creative burden. If they can just keep this up for another few months, Leicester really are in business.

Someone has to
Glib, but true. Leicester are not good enough to trample everyone and get 90-95 points. But here’s the thing: nor is anyone else with the (slight) possibility of Manchester City. Someone has to win the league and Leicester are halfway there. It doesn’t matter what the final points tally is as long as it’s more than anyone else manages. This reason of course applies to everyone else in the top six – it’s one of the reasons this season is such strange fun – but not equally. There’s no denying that a season like this one brings Your Leicesters and Your Evertons further into the equation.