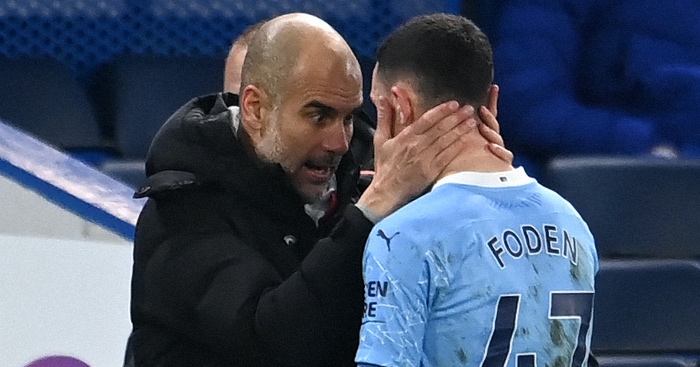 Liverpool will probably win the Premier League, but recent evidence suggests they might not. Manchester United look like a very decent shout right now, Spurs are still well up there and Chelsea somehow remain just seven points off the top. We may well have to make claims on behalf of Leicester, Everton and Southampton in the coming weeks (this season?!) but for now we’ll look at Man City, who looked particularly menacing against Chelsea on Sunday. Here are five reasons Pep Guardiola’s side can win the Premier League this season.

Been there, done it
Excluding players that aren’t really playing now (like Phil Jones) and players that weren’t really playing when their teams won the title (like Paul Pogba), only four players from the squads at United, Spurs and Chelsea have played in a Premier League title-winning team: David de Gea, Nemanja Matic, Cesar Azpilicueta and N’Golo Kante.

Of course, anyone that wins the title has to win it for a first time. James Milner was the only previous winner as Liverpool stormed it last year, for example. But experience has got to count for something. 13 of City’s players have played a significant role in winning the Premier League title; Riyad Mahrez is the only one of that 13 not to win two titles with City. And he still has two Premier League titles. They just know what it takes.

As does Guardiola, who – along with Mourinho – is a fully qualified teacher compared to wide-eyed parents Ole Gunnar Solskjaer and Frank Lampard, sticking CBBC on for three hours and hoping for the best.

Miserly defence
Remember when Man City lost the title last season because their one trustworthy centre-back was injured? Fernandinho played at the heart of defence along with A. N. Other, as long as it wasn’t John Stones.

Liverpool were better in almost all departments, but the juxtaposition of Aymeric Laporte being out and Virgil van Dijk bossing Liverpool to the title offered an easy explanation for those trying to pin-point a reason for the gulf in points and performances. The reverse is now true. Jurgen Klopp’s side are playing midfielders in defence and City’s back line is so good that Laporte now watches from the sidelines.

The most miserly defence in the Premier League is instead made up of ever-present new signing Ruben Dias, who has been so good he’s barely been noticed, and – incredibly – that man Stones, who is being noticed, but only because of the absence of ricks that could be added to ‘Manchester City Defensive Bloopers | 2016-present’, in which he has played a starring role.

With Laporte and Nathan Ake in reserve, City have turned their biggest weakness into their greatest strength. Vincent who?

Squad depth
The quality of players Guardiola has to choose from is ridiculous. Here are City’s two potential teams…

Aguero comeback
Since City last signed a striker – Gabriel Jesus for £28million in January 2017 – they’ve spent over £350million on eight defenders and around £250million strengthening other areas. The beautiful problem for Guardiola has been Sergio Aguero: it’s difficult to sign a world-class striker when they know they are going to play – at best – second fiddle.

But they’ve felt the pain of their lack of options. After 15 games last season, Aguero had scored nine of City’s 43 Premier League goals. With the striker injured and yet to get off the mark in this campaign, they’ve managed just 24.

After minimal minutes against West Brom, Newcastle and Chelsea in recent weeks, a return to the starting XI looks imminent. And with the back door as firmly shut as it’s ever been and the front – on recent evidence – potentially as saloon-like as ever, what a time to welcome back the rootinest, tootinest cowboy in town.

Phil Foden
We could easily claim that the Manchester City talisman – who’s excellent but slightly less excellent than Bruno Fernandes – will drive his side to the title. But Kevin de Bruyne was at the top of his game last season and couldn’t get City over the line. One man who was there last season, but in spirit on the bench more than body on the pitch, could make all the difference if he’s given the opportunity to do so.

Phil Foden started the first four Premier League games of the season. This was it. The New David Silva, whose playing style actually bears very little resemblance to David Silva, was finally being given a chance to be David Silva. But then he started just one of the next ten while the actual David Silva led Real Sociedad on a six-game winning streak to take them to the top of La Liga in some sort of weird football voodoo. It looked like another false dawn for England’s great hope.

But then came Chelsea. He was magnificent in by far City’s best performance of the season. A brilliant assist and a wonderfully deft touch for his goal were the highlights of an all-round display that showed the 20-year-old is arguably Guardiola’s most effective weapon in that more advanced position. Play him, Pep.