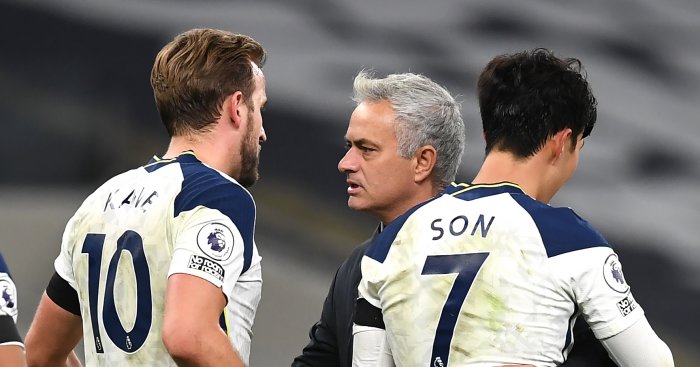 While we all know Liverpool are obviously going to win the title like the joy-snuffing miserable brilliant bastards they are, but… what if that doesn’t happen? Could table-topping Spurs win the title? Could that be a thing that actually happens in real life? Inexplicably, yes. Here are five reasons why.

1) Harry Kane might not get injured
Okay, bear with me here. This would be a bit of a stretch even in a normal season given Kane’s importance, workload, general endeavours and ankles, but what if this season he somehow doesn’t get injured? What then? Because he’s bloody unbelievable. He’s been the best player in the Premier League this season by a wide margin and you can probably make a case that literally nobody in club football anywhere is playing better. He’s an absurd footballer playing at an absurd level beyond even the absurd levels he wasn’t supposed to ever get back to after his injury problems. If he plays the whole season, well.

2) Jose Mourinho remains an evil genius
Even at Manchester United where it all went completely to shit he still won things. At Spurs it is not (yet) going completely to shit. Mourinho was given a summer transfer window he could only have dreamed of and, for now, appears focused and happy in a way we’ve not seen since at least Chelsea. He is exactly the right sort of bastard to prevail in a season of flux. He’s bossing Instagram, winding up Pep Guardiola. And he’s got…

3) The perfect squad
This Spurs squad as it now stands is absolutely perfect for Mourinho. On the most basic level it’s got the sort of players he likes in the crucial positions he wants them to play the shapes and structures he prefers and in sufficient numbers to get through this most arduous of seasons. But it goes beyond that. This Spurs squad sits in an absolute Jose sweet spot: just about good enough to do what he asks of them, not quite good enough to just tell him to f*** off when he goes full Jose. They are now a squad of intelligent c***s. Despite what Stan Collymore thinks the buy-in looks near total, with even those who looked doomed a few months ago such as Serge Aurier and Tanguy Ndombele showing their willingness to work and Mourinho his willingness to acknowledge it and reintegrate them.

Tim Sherwood’s choice of word might have been awry when saying Mourinho has “brainwashed” this squad into believing they can win the title, but unlike the time he time he tried to turn Kyle Walker into a central midfielder, you can see what he means and he does sort of have a point.

Even the saddening Dele Alli situation hasn’t turned completely sour, Pogba-style. While it’s hard to see any way back for Dele, you still sense mutual respect there and, given what’s happened to others, nothing can be entirely ruled out. And if all else fails at least he’s got his cricket to fall back on.

4) Even the Spursiness might have helped, in a way
It would be naïve to think the hardwired Spursiness is suddenly all in the past and truly crazy to suggest tossing away a three-goal lead in the final 10 minutes of a match against local rivals was anything other than a negative. But let’s give it a crack. Because Spurs are a different, arguably less exciting but undeniably more efficient side since that West Ham daftness.

It’s easy to accept the narrative that the Hammers’ comeback came entirely out of the blue, but that really wasn’t quite the case. The visitors created plenty of chances at 3-0 down, and even during the first quarter-hour when Spurs raced into that 3-0 lead there were still chances for West Ham. Spurs’ defending didn’t look three-goals-in-10-minutes bad, but it wasn’t great. Things have changed since then. After that game, Spurs had conceded eight goals in five games with no clean sheets. Since then they have conceded once in four games, and that one goal would have been disallowed but for a referee’s ego preventing him from seeing the obvious error he had made.

They’ve won every game since West Ham, scoring winning goals in the 76th, 73rd and 89th minutes before taking down City with unerring precision. The City clean sheet, and the manner in which it was secured – i.e. entirely according to the plan Mourinho had set out and on the back of outstanding displays from Toby Alderweireld and Eric Dier – also suggests something more permanent than ‘Playing against Burnley, Brighton and West Brom’ is at work here for what is, preposterously, now the only Premier League side with a single digit in the goals against column.