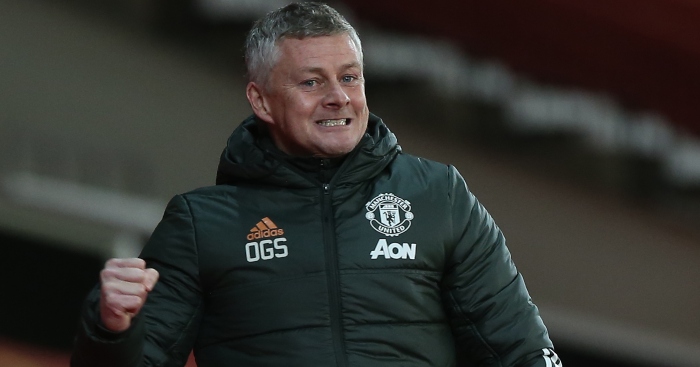 Liverpool will probably win the title, the miserable, brilliant pricks that they are. But they might not. Jurgen Klopp’s side are not the shoo-in for no.20 that they were for 19, which could see United take 21.

Ole Gunnar Solskjaer is a tactical genius after all
Marcelo Bielsa, the coach so idolised by the likes of Pep Guardiola and Mauricio Pochettino, was taken to school by Solskjaer on Sunday. So by the wisdom of playground logic – the most sage of all the logics – the Manchester United manager now wears the crown of the world’s most tactically innovative and courageous coach.

Okay, so Bielsa and Leeds effectively pulled up to Old Trafford and pulled their own pants down, but the 6-2 demolition job by United highlighted how anyone willing to take on Solskjaer’s Plan A is embarking upon a fool’s errand.

Any side that wants to beat United will inevitably have to stray from their defensive posts at some time and then, BOOM, Solskjaer’s counter-attacking machine will crank through the gears on the way to Mach speed in less time than it takes to say ‘one-trick pony’.

Of course, that becomes more of a problem if teams aren’t actually that fussed about beating United. Neither Chelsea nor Manchester City were willing to risk a point for the sake of three at Old Trafford. But Solskjaer has played the long game here. He anticipated opponents’ pragmatism with a dastardly plan hinged on pretending to be dog muck, especially at home, for just long enough to lull more Premier League managers into thinking “this United are sh*te, let’s do ’em”, but not so long that they aren’t within touching distance of the summit come Christmas.

United have ridiculous strength in depth
Did you see Solskjaer’s bench on Sunday?

Perched upon it were the cheeks of arguably England’s best goalkeeper, football’s greatest enigma, PSG’s highest-ever goalscorer, a £40million midfielder, Brazil’s left-back, the future of England’s attack, a man even lovelier than Marcus Rashford… plus Nemanja Matic and Eric Bailly.

For every position, Solskjaer has quality cover. Except at right-back, but what is January for if it’s not for bringing Kieran Trippier home? Assuming people and goods are allowed to leave and enter the country by then, of course Trippier would rather watch Ole’s winning machine power to the Premier League title from Europe’s most star-studded bench. What’s his alternative? Being forced by Diego Simeone to break sweat for a title medal which, let’s be honest, is barely worth having while Real and Barca are trying to out-sh*te each other.

Even if some United players run out of steam having been allowed an off-season that amounted to little more than a tea break, Solskjaer can afford to rotate his squad and he has demonstrated his knack for doing just that. Many people had forgotten Daniel James’s existence before he was brought in from the cold by Solskjaer on Sunday to run really fast at a Leeds defence that was cowering in the foetal position within three minutes.

I reckon that Manchester United's bench on Sunday – Henderson, Bailly, Alex Telles, Matic, Pogba, Van de Beek, Mata, Greenwood, Cavani – was probably the strongest of any team in Europe this weekend. This idea that the squad isn't good enough is surely nonsense.

Home form doesn’t matter when you’re this good away
United’s form on the road is better than anything the top flight has seen in 60 years.

The Red Devils have won their last 10 matches away from Old Trafford having scored two or more in each game. That hasn’t been done since Tottenham in 1960, 32 years before football was actually invented.

In the Premier League, only Chelsea in 2008/09 and Man City in 2017/18 have won their opening six away games like United have this term. Of course, those Chelsea and City teams went on to win the title.

Given no side seems that arsed about mounting a consistent title charge this season, the points dropped at home won’t be missed as badly as they might have in previous season. But just in case, United opened the Old Trafford floodgates on Sunday in advance of more unwitting opponents being swept aside by the red tide in M16.

Every successful team needs a talisman and in Fernandes, United have certainly found one. The Portugal star has had a greater transformative effect on United than any other signing in the post-Fergie era. And there have been lots of them, though mostly crap.

Regardless of the fact that United were almost strong-armed into signing Fernandes by their own ineptitude and the need to lift spirits with something new and shiny at the end of a wretched January, Ed Woodward struck gold when he sanctioned a move that so many other clubs seemed strangely hesitant to make.

Since joining United, aside from stiffening up an often spineless squad with some much-needed backbone, Fernandes has had a hand in 30 goals in 27 Premier League appearances. Even if you take away his penalties – though it’s a bit weird that you might want to – he’s still doing ridiculous things…

No midfielder has scored more non-penalty goals than Bruno Fernandes (5) in the Premier League this season.

That’s exactly what this United team are: Mesmerising and infuriating in equal measure. If Solskjaer can harness the former characteristic and limit the latter, then the Red Devils are in business.

Yes, United have their weaknesses and Jamie Vardy will be looking to expose the lack of pace at the heart of their defence on Boxing Day. But every team this season considered to be in with a hope of dethroning Liverpool, as well as Liverpool themselves, has flaws.

Solskjaer side might not win the title. Liverpool probably will. But United have enough to take a run at it, which is more than most of us expected even just a few weeks ago.