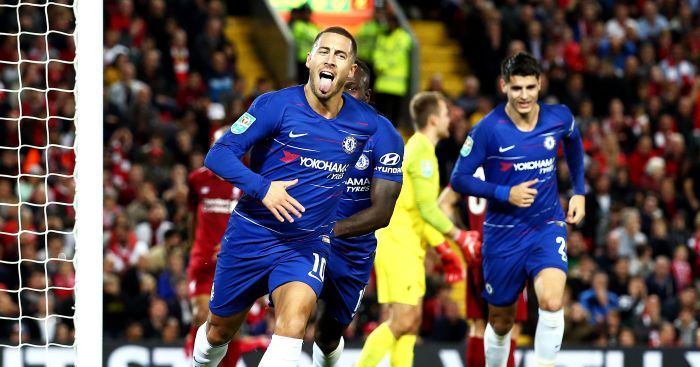 1) A genuine title race with an improved Big Five
Just two points separate first from fifth; this time last year that spread was a massive nine points, with Chelsea, Arsenal and Liverpool already out of the title picture. At that juncture it looked like a three-way battle for the title and a three-way battle for fourth place; right now the numbers suggest we have a five-way battle not just for the title but for four Champions League places, even though no sensible person is expecting either Tottenham or Arsenal to keep pace.

How has this happened? In the best possible way: that’s how. Not by one or two teams slacking off and joining the pack, but by the best teams getting even better. Manchester City are the only side in the current top five not to have improved their points total from this time last season (and the xG suggests they actually should have claimed all 24 points). Liverpool have spent extensively and improved, Chelsea and Arsenal have changed managers and Spurs? Well Spurs continue to defy expectations by churning out results even while rarely looking any good at all.

The Premier League has not entered its ninth game with three unbeaten teams since 2011/12. That bodes really rather well.

(The other unbeaten team that season were Newcastle. Weep, Geordies, weep.)

After 8 matches of the 2018/2019 #PremierLeague season, the table would look like this if all teams had the points that the balance of chances in their matches suggest they should have.

2) A struggling big club
And it’s all the better when it’s the biggest club. Unless you are a Manchester United fan, there is little more delicious in football than seeing Manchester United struggle for both fans and media. It’s not about bias or an agenda; it simply makes life more interesting when a giant is stumbling, especially when it’s done with such scant grace. Every single ingredient has been present: Awful football, public fall-outs, FA charges, leaks from ‘senior sources’ and players alike. This is not a struggle made dull by platitudes and pledges; this is pure entertainment.

As we wrote earlier this week, it is truly the biggest surprise of the season that Manchester United’s defence has been so porous. This time last year they had scored 21 goals and conceded just twice; right now they have a negative goal difference having shipped 14. That is a truly astounding collapse at both ends of the pitch. The arguments can stretch long into the night about the root cause of this collapse but players, coaches and owners really should have their hands in the air. It has been as pathetic as it has been glorious. Pull up a chair because this story still has a whole lot of pages left to turn.

3) Likeable teams gatecrashing the top eight
And there are few teams more likeable than Eddie Howe’s Bournemouth, who have added genuine pace to their transitions this season to reap an astonishing 16 goals in eight games. This time last season they had scored just four! The Cherries’ front three have received plaudits, while Nathan Ake and Howe himself are both reportedly being targeted by Tottenham. Burnley’s sojourn in the top eight last season felt like an extended but oddly painful lottery win, but this Bournemouth side is the product of long-term planning and an established and neutral-pleasing style. What’s not to enjoy?

And then we have Wolves. And Wolves are sexy. Even the Wolves who were not sexy have become sexy.

4) Potentially a big old relegation battle
There are teams who really should not be down there (West Ham, Fulham, Crystal Palace), there are teams who really should (Huddersfield, Cardiff, Newcastle) and teams who we really would not miss if they quietly slipped away (Brighton, Southampton, Burnley). That’s an astonishing nine teams who have claimed one point or less per game this season. We are on week nine and we are already looking at Newcastle v Brighton and Cardiff v Fulham as relegation six-pointers this weekend.

You might think that Huddersfield, Cardiff and Newcastle are doomed but the statistics suggest the first two clubs will improve, while the first half against Manchester United pointed to the fact that Newcastle have rather more in their locker than Rafa Benitez has allowed us to see. The teams that allow the opposition the most shots are sitting in 12th, 13th and 17th; the teams that take the least shots are sitting in 12th, 13th and 19th. This one could run and run, with Burnley (12th) and Brighton (13th) right in the midst of the battle.

5) We have the best player in the world right now
We’re not talking about longevity or mind-blowing goal records, simply about the best player in the world right now. For a long time it looked like the hardest person to convince would be Eden Hazard himself but when asked last week if he was now the best in the world, he said: “Yes. The team is helping me a lot also.” The famously reluctant hero is right – Chelsea might be playing Sarri-ball but Sarri-ball is all about Hazard right now. The Belgian has been gifted the vision of Jorginho and the selflessness of Oliver Giroud and he is absolutely thriving.

Hazard featured along with Chelsea teammate N’Golo Kante and David de Gea in the FIFPro XI last month, becoming the first players to represent the Premier League since 2014, when David Luiz was included after leaving Chelsea for PSG and Angel di Maria was name-checked before his Manchester United move turned into a nightmare. Those trinkets and XIs may mean bugger all to me and you but to egotistical footballers they represent real achievement. And it’s a long time since anybody thought a Premier League player was the best in the world.

Maybe he won’t need to leave England for Spain to win the Ballon d’Or, after all.

Best in the world!! 🇧🇪

And unlike a Few Names on this list, @hazardeden10 plays in a League where every team is a Threat!

He must be on Cloud 9 right now!#CFC #Chelsea #ChelseaFC pic.twitter.com/XC3e5uy2Jn