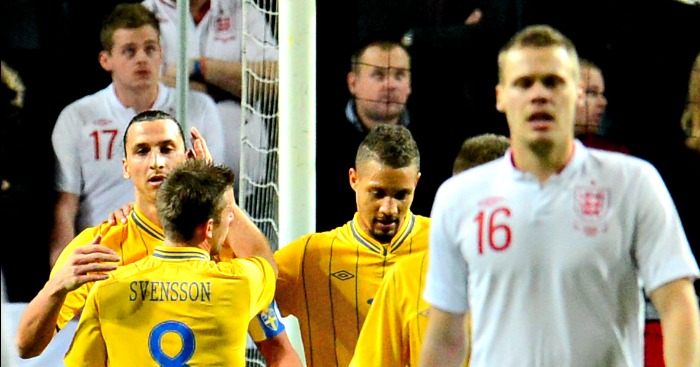 Ryan Shawcross
“I was given 10 minutes to show what I could do and probably didn’t provide a good enough performance. I was against one of the best strikers in the world who was on a hot streak at the time and these things happen.”

Ryan Shawcross was not the one lobbed by a 25-yard overhead kick. But Ryan Shawcross is the one whose international career was stopped almost as soon as it had started. Bloody Zlatan.

Shawcross was one of six England debutants during a friendly against Sweden in November 2012. This was the Roy Hodgson era of Leon Osman, Carl Jenkinson and Wilfried Zaha; how times have changed. Stoke defender Shawcross was introduced with England winning 2-1 after 74 minutes. A quarter of an hour later, Zlatan Ibrahimovic had added a second, third and fourth to his opener. Shawcross was not particularly at fault for any of them, but he became the fall guy nonetheless. The clamour continues in some parts for the 28-year-old to receive another chance, but one does not seem forthcoming.

Steven Caulker
Another of the six debutants in Sweden. Steven Caulker’s inclusion may seem harsh – he is only 24 – but much has changed for the Liverpool loanee. Four years ago he was a 20-year-old impressing on loan at Swansea, with a future at Tottenham ahead of him. Fast forward to 2016, and he has been relegated from the Premier League in consecutive seasons, is in the midst of the fifth loan spell of his career, and is a back-up striker.

Caulker joined the David Nugent club in scoring on that fateful night in Sweden, but he has not received an international call-up since. The only thing Caulker has in his favour is that his middle name is ‘Roy’.

Jake Livermore
A much more sombre story has threatened to engulf Jake Livermore’s career following his solitary England cap, which also came in 2012. The then-Tottenham midfielder served as a second-half substitute in the seventh game of Roy Hodgson’s reign as manager. As England sought revenge on Italy for their Euro 2012 penalty shoot-out exit just two months prior, Livermore was afforded 20 minutes. Then 22, Livermore replaced Frank Lampard at everyone’s favourite sporting venue: the Wankdorf Stadium. The midfielder failed to play a notable part in such a short space of time, and has not been involved in the England set-up since.

Fraizer Campbell
The list of strikers with a solitary England cap since 2007 makes for difficult reading: David Nugent, Dean Ashton, Kevin Davies, Jay Bothroyd, Jay Rodriguez, Danny Ings. How remiss of us it would be to forget Fraizer Campbell.

Campbell owes Stuart Pearce a debt of gratitude for his international career. The England legend handed the Crystal Palace striker each of his 14 England under-21 caps, and was sufficiently impressed by a ratio of six league goals in four seasons to hand Campbell a call-up in February 2012. He replaced fellow Sunderland alumnus Danny Welbeck with ten minutes remaining in a friendly against the Netherlands – the first game since Fabio Capello’s resignation – and he probably ran around loads. Micah Richards played at right-back; the central midfield comprised of Gareth Barry and Scott E. Parker; Stewart Downing was also a substitute. God bless you, Stuart Pearce.

Wait, what? Jarvis became the first Wolves player to feature for England in 21 years when he was introduced as a second-half substitute in a friendly against Ghana in March 2011. The winger replaced Jack Wilshere, the future of the Three Lions five years ago. Jarvis took his place on a Fabio Capello bench also including Rob Green, Scott Carson – because you can never have too many keepers for an international friendly (neither came on) – Joleon Lescott, Scott E. Parker, Peter Crouch, Darren Bent, Danny Welbeck and Jermain Defoe. Eesh.