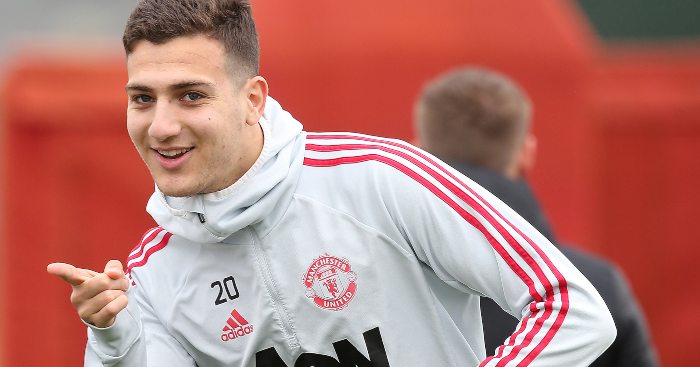 Diogo Dalot (Manchester United)
The Portuguese right-back must be watching Manchester United throw money at Crystal Palace for Aaron Wan-Bissaka and be wondering just what the f*ck is going on.

Dalot joined United for £19million last summer when Jose Mourinho said this of his new signing: “In his age group, he is the best full-back in Europe.” And the 20-year-old, when injuries allowed, showed plenty of promise in his early performances at Old Trafford.

Ole Gunnar Solskjaer must be rather less convinced by Dalot than Mourinho, otherwise why the hell would United be pursuing Wan-Bissaka as vigorously as they seem to be?

The situation hasn’t escaped the former Porto defender, who issued this cry for help on United’s official website: “I want to make my statement in the team and play as much as I can at right-back because I think it’s my best position. I just need to prove that to the manager with my work… I just need to push on. My goal is to make right-back my own.”

You might want to check in with your agent, DD…

1 year ago today i joined the biggest club in the world! @ManUtd ❤️🙌🏾 pic.twitter.com/wW0tLdKq1Y

Diego Rico (Bournemouth)
Dalot isn’t the only big-buy full-back purchased last summer to be wondering what was the point of it all.

Bournemouth have already replaced Rico, their £11million signing from Leganes last summer. Eddie Howe clearly felt it was a necessary step because he wasted no time in chucking £13million at Bristol City to take Lloyd Kelly. The England Under-21 defender might see his future at centre-back in a few years, but for now, he’ll be keeping left-back Rico on the sidelines, where he spent most of last season.

Rico managed only five Premier League starts and the 26-year-old has had “a few hurdles to overcome” said Howe, immediately before he plonked another in his way in the shape of Kelly.

“He’s done okay,” Howe added in a rather less positive tone than his usual. “It’s difficult to adapt I think for Diego slightly with the intensity and physicality of the division.”

Yoshinori Muto (Newcastle United)
Mike Ashley is getting pelters for refusing to pay more than a tenner for Salomon Rondon, who the Toon brains trust apparently believe is almost ready for the knackers yard at the ripe old age of… 29. But Ashley may ask what happened to the centre-forward he spent around £10million to buy last summer.

Injuries and international commitments certainly didn’t help Muto’s efforts to establish himself at Newcastle though nor did his performances when he was given an opportunity – 17 in the Premier League. Reports suggested Rafael Benitez was reluctant to use Muto while his English was so poor and the Toon boss confirmed as much in March.

“I think he’s getting better in terms of the understanding with his team-mates because he is having English lessons, so he can communicate much better,” Benitez said when asked what Muto had to do to get more minutes. “Nobody ever worries about his workrate and how dynamic he is during games and training sessions. It’s just for me to know that he knows about the other players around.”

Carlos Sanchez
Manuel Pellegrini could do with midfield reinforcements, even if Manchester United have been deterred from paying £50million-plus for Declan Rice. Mark Noble isn’t getting any younger and he certainly won’t become any more mobile – similar could be said of Jack Wilshere.

At least Sanchez may be available this season. The Colombia international joined the Hammers on deadline day last summer when he said he was “very excited and looking forward to achieving lots” in east London. All he achieved was notoriety among West Ham fans for giving away a last-minute goal to gift Wolves victory before knacking his knee after only five Premier League appearances.

Sanchez returned in cameo roles off the bench in the final two games of the season while a full pre-season will give the former Aston Villa flop a decent run-up at the new campaign. The best he can hope for? Catching a desperate manager’s eye elsewhere because aged 33, it seems unlikely he will improve his prospects at the London Stadium.

Caglar Soyuncu
The Turkey defender did not come cheap when he moved to Leicester from Frieburg last summer. The Foxes reportedly agreed to pay up to £19million for the 23-year-old then kept him very much in reserve.

Soyuncu managed only a single Premier League appearance under Brendan Rodgers but the manager has promised him a chance next season. “Perhaps things haven’t quite gone for him as he would want, but I have found him a really good boy who wants to learn,” said Rodgers in April. “He is strong and aggressive, but he hasn’t had a lot of game time. It is a different game in the Premier League and he is adapting to it. Adaption is important so I like to give them time to find their feet and settle in, knowing even in this first year he is adapting.”

Adaptation period over, Soyuncu could offer Rodgers a cheap solution to filling the void left by Harry Maguire should Manchester United stump up for the England defender, rather than settle for a cheaper option, as seems to be their policy this summer. Lewis Dunk may provide an obstacle to the regular football Soyuncu is looking for, but if Leicester are going to use their fifth-most expensive signing ever, now might be a good time.