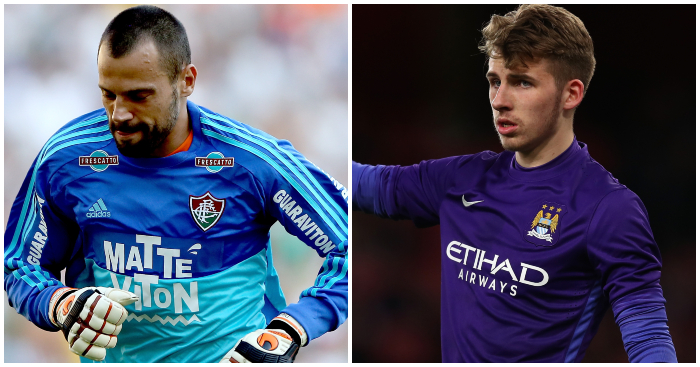 Pep Guardiola is reportedly considering his options after Claudio Bravo’s season-ending injury left rookie keeper Daniel Grimshaw as the only back-up to Ederson. What are those options?

Ross Turnbull
With the transfer window being closed, Guardiola is restricted to free agents if he wants to recruit and 33-year-old Turnbull has something few others in the City dressing room do: a Champions League winner’s medal. It was ‘earned’ during four years at Chelsea but Turnbull’s career has been on the slide ever since.

After being released by the Blues, Turnbull has moved around Yorkshire, playing for Doncaster, Barnsley and Leeds. He struggled to hold down a place anywhere. Since leaving Leeds last year, the former England Under-21 international has been working as a goalkeeper coach at National League side Hartlepool.

Stuart Taylor
The 38-year-old has made a living – though not as comfortable as you might think – from being back-up and he already knows City. In fact, Taylor has a title winner’s medal after serving as third-choice through 2011-12 season. In three years at the Etihad Stadium, he made a single appearance in a FA Cup replay at Scunthorpe.

Taylor has played seven league games in the six years since leaving City, during which time he had spells at Leeds and Reading, and dabbled with retirement before spending two years in the stands at Southampton.

City’s predicament is exactly why clubs keep keepers like Taylor around. Though Guardiola will probably feel he needs a No.2, rather than an inactive third-choice.

Diego Cavalieri
The pool of free-agent keepers is more of a puddle. Cavalieri is available after being released by Crystal Palace at the end of last season following a three-month spell at Selhurst Park during which time he sat on the bench six times. Prior to that, he had seven years at Fluminense, where he was capped by Brazil.

Cavalieri also played 10 games for Liverpool during three seasons under Rafa Benitez and other than the Brazilian veteran, there is no viable alternative among out-of-contract keepers. Unless Guardiola would consider Jake Kean, with his single Premier League appearance for Blackburn six years ago; or Argentinian Oscar Ustari, who played three times in the FA Cup for Sunderland in 2014.

Pluck a keeper from the City Football Group
City are unlikely to be granted special dispensation to recruit a loan keeper and reports suggest they have no recall option on Montenegro Under-21 international Aro Muric who is spending the season at NAC Breda. So, if they want to bring in another stopper, they might have to be creative and rely on a little help from their friends…

City Football Group insist their clubs in Manchester, New York City and Melbourne are separate entities and while all parties would refute the feeder club labels, there are certainly pathways in place. Might Man City convince one of their partner clubs to ‘free up’ a capable keeper?

Melbourne will kick off the A-League season in October with former Liverpool and Oldham stopper Dean Bouzanis and 37-year-old former Australia international Eugene Galekovic. USA international Sean Johnson is keeping goal for NYCFC, who look like taking their season into the MLS play-offs in November.

Daniel Grimshaw
Or, Pep could just trust the kid. Grimshaw is a 20-year-old lifelong City fan who has been with the club since he was nine. The 6ft 1in keeper was part of City’s squad for the pre-season tour to USA after signing a new three-year deal with the club.

Upon agreeing a new contract, Txiki Begiristain said, of the Swinton-born stopper: “He is a goalkeeper of great potential and has impressed Pep Guardiola and his coaching staff over the past two seasons with his hard work and progress.

“As a result of this, Daniel will be increasingly involved in the first team set up next season.”

One asset Grimshaw has above any of Guardiola’s other options is he is already accustomed to City’s style of play, which places so much emphasis on the goalkeeper’s distribution. And presumably the prospect of Grimshaw stepping up to No.2 was considered when Guardiola decided on him as No.3 for the season.

Very happy to sign a new contract @ManCity Looking forward to the next 3 years. Thankyou to everyone who’s supported me on the journey. Hard work continues. pic.twitter.com/KezXK3xBSQ