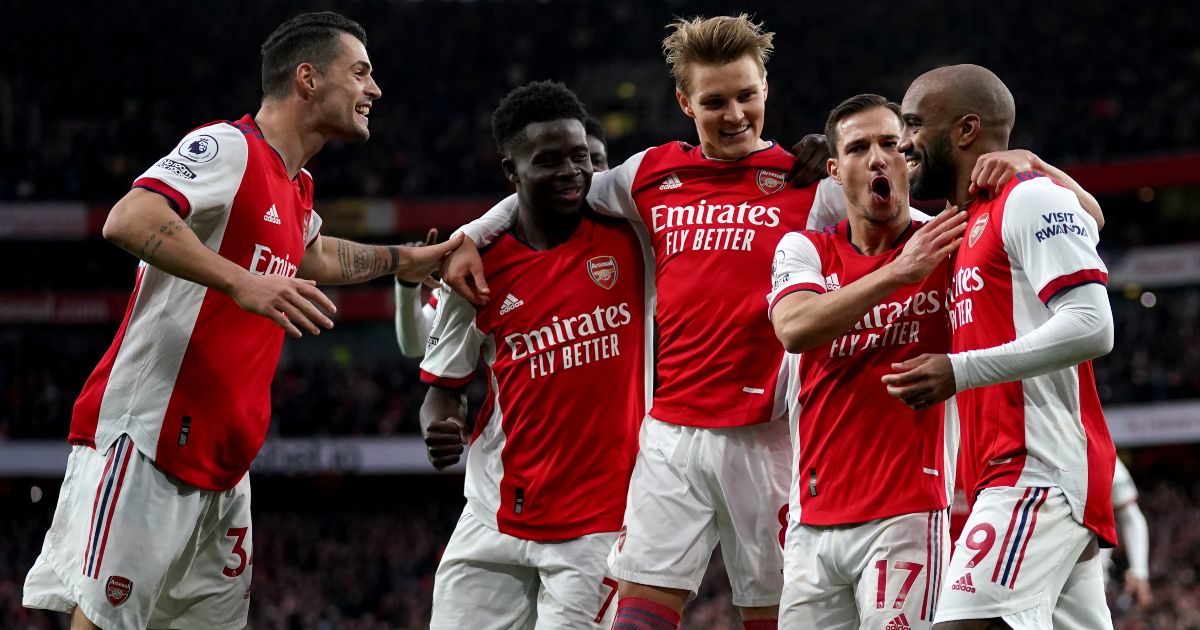 Arsenal need a striker apparently. A really good one. Mikel Arteta probably hasn’t thought of that…

The greatest football team…the world has ever seen
The Sun‘s Arsenal man Mark Irwin usually makes no secret of his intense dislike of reporting on Arsenal, so it is a surprise to see him over-egging the achievements of the Gunners rather than laughing snidely.

‘But now they are masters of their own destiny – after another priceless victory carried them a giant step closer towards their ambitions.

‘No team has managed more Prem points these past three months than Arsenal, so even their most sceptical fans are starting to believe.’

Perhaps he means ‘past three months’ as in January, February and March. Erm…

Still, it’s nice that Irwin is enjoying himself for once.

No. 9 dream
Over on The Sun website, the message is slightly different:

‘Arsenal attack is finally fun to watch again even if Lacazette offers little.. a top No9 would make team frightening’

Yes, that’s definitely the line to take after a fifth successive Premier League victory. Seems fair. Joshua Jones is on one…

‘But for all their slick attacks and the minutes of action missed as those in front of us in the press box were out of their seats time and time again, there seemed to be one missing link.

‘The out-of-contract Frenchman may have stuck his penalty away, sometimes draws others in and is now the stand-in captain… but plenty of others can do that just as well.’

Can they? Pierre-Emerick Aubameyang certainly struggled, and Mikel Arteta himself described Lacazette as “absolutely terrific” on Sunday. Maybe he knows better.

‘What Arsenal need is a proper goalscorer.

‘Lacazette’s penalty was just his fourth goal in the Premier League this season and first since Boxing Day.

‘No disrespect – but the others came against Crystal Palace, Southampton and another spot-kick past Norwich. That speaks volumes.

‘Find themselves a TRULY world-class No9 in the summer and this team may well just about be complete for the next phase of this Arteta rebuild.’

No disrespect but a) Arsenal have scored nine Premier League goals in their last four games so goalscoring is not really an issue right now and b) we are pretty sure that every club would like a TRULY world-class No9 but few are available at affordable prices. Hence, one really quite successful Premier League team simply does not have one; we suspect Arteta might have noticed that.

Also, Joshua Jones needs to develop more than one Arsenal opinion: Mediawatch always remembers. It really doesn’t feel as though not having a proper striker ‘will prove costly’ to their Champions League prospects.

I’m so exited
The Arsenal theme continues on the Mirror website, where we are told that ‘Mikel Arteta has overcome “biggest mistake” at Arsenal highlighted by Gary Neville’. The clicks are a-flowing on that one.

What’s not clear from that headline is that said “biggest mistake” (being ‘boring’) was highlighted in December 2020 by Gary Neville. This is breaking news, folks; Arteta has overcome something highlighted 15 months ago.

‘It’s been a rocky road for Mikel Arteta in charge of Arsenal, but ask anyone at the Emirates how things are going now and they might just tell things that the club is beginning to get back on track.’

They might just ‘tell things‘? Go on…will this start to make sense soon?

‘From the low of an eighth-place finish in the Premier League last season, the Gunners head into their final 12 games of this term not only in the top four but with three games in hand on closest rivals Manchester United.

‘So, what’s changed? Well, for starters, Arsenal are exiting again.’

They’re damned exiting. And so are we…from this utter drivel.

Because of course we were all debating whether Arsenal should have signed Martin Odegaard right up until the minute he was excellent on Sunday.

Just the 14 months later. The only shock is that he wasn’t talking about Martin bloody Odegaard.

The leash said, the better
This amused us on the Express website:

Can you ‘unleash’ a double act that has already started 10 games together this season?

Reach for the stars
This is a real doozy from the same website:

‘Man Utd’ and ‘Jurgen Klopp’ in the same headline? Glory be to hallelujah. Somebody (Charlie Gordon) will be hitting their page view targets this month.

Mediawatch’s first question is whether you can have a Plan B after two managerial candidates? Wouldn’t that be a Plan C?

Our second question is ‘what the hell has Jurgen Klopp said about the Manchester United job?’ and our third is ‘why haven’t we got the quotes all over our own website?’

Answering the second question with ‘bugger all’ negates the need to ask the third. Of course the ‘Jurgen Klopp comments’ are absolutely nothing to do with Manchester United at all.

What he does say is this about Graham Potter: “Between football people, Graham is really highly regarded. I like watching his team a lot, I don’t like playing them too much. He’s a really good one.”

And if you read those quotes and thought ‘Man Utd could have Erik ten Hag and Mauricio Pochettino Plan B after Jurgen Klopp comments’ then congratulations, you too could have a masters in sports journalism.