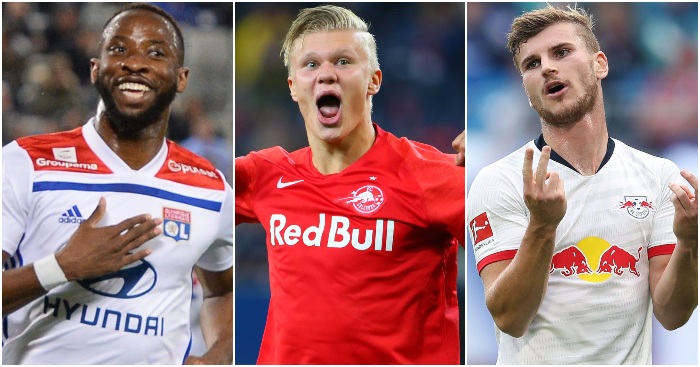 Ole Gunnar Solskjaer says he wants to sign a new striker. Who might fit the bill for Man Utd? Here are five candidates…

Mario Mandzukic
Signing the Juventus centre-forward would represent a significant shift from the policy that United have adopted of buying young, British talent. The 33-year-old Croatian ticks none of those boxes, but at least he would be available. In January, that is half the battle.

Reports suggest Juve would ask for only £9million and though Mandzukic would expect the same salary he earns at Juventus, if not more, his £87,000-a-week wage is loose change to a club that was quite willing to deposit almost half a million a week into Alexis Sanchez’s bank account.

Mandzukic is available and presumably willing, but so am I. And I’ve played as much first-team football as the Juventus centre-forward this season. That doesn’t mean I’m the answer to Solskjaer’s attacking problems and similar applies to Mandzukic.

If Maurizio Sarri deems him not good enough for Juventus, is Mandzukic really the solution for United? The Red Devils have signed veteran centre-forwards in the past and a couple of them turned out to be among the best signings the club has made in the last decade. But Robin van Persie was four years younger than Mandzukic when he was recruited by Sir Alex Ferguson while Zlatan Ibrahimovic was still in incredible form and shape for PSG when he joined as a 34-year-old.

Mandzukic could come in and do a stand-up job for half a season, possibly 18 months while acting as a mentor to the likes of Marcus Rashford and Mason Greenwood. But Solskjaer has spoken of United’s desire for a more permanent solution: “You need the right ones that are going to stay here for a longer period. That’s the long-term thinking that we have to show.”

Erling Haaland
So we go to the other extreme and consider RB Salzburg striker Haaland. The teenager certainly ticks the long-term box, but is he ready to score goals in the Premier League right now?

Haaland can’t do much more than what he is this season. The 19-year-old has scored 11 goals in eight Austrian Bundesliga games including a couple of hat-tricks. He also notched a treble in his first half of Champions League football against Genk a fortnight ago. Five assists means Haaland has been directly involved in a goal every 35 minutes so far this term.

The only way to know if he can take the leap to the Premier League is to buy him and play him. But United have been more willing in the past to allow young players like Haaland to make an intermediate move to see how he copes before spending big money further down the road once they are more convinced of his credentials.

Unless the scouting reports on the Norwegian come back and insist that United have to make their move now, then Solskjaer doesn’t need another young, raw striker. He’s got quite enough of those.

Jadon Sancho
Speaking of players Solskjaer is well-stocked for, wide man Sancho continues to be linked with a move to Old Trafford, just as he was for many months prior to the summer. At one point when it was all sunshine and smiles under Solskjaer before he inked a permanent contract, many reports suggested it was almost a done deal, and United seemed more than happy to encourage those whispers.

Instead, Sancho was smart and stayed at Borussia Dortmund, who ultimately had the final say because it would be they who set the price. The England star would have cost in excess of £100m so instead United moved for Daniel James for a sixth of the price.

That hasn’t perturbed United and apparently they remain very keen on the 19-year-old, who has scored three goals and offered four assists in six Bundesliga matches this season. He certainly fits the young-and-British criteria, though he would be no more available in January than he was in summer. Nor is he a centre-forward and though United could certainly do with more quality on their right, their priority must be a centre-forward.

Timo Werner
There were whispers prior to Romelu Lukaku finally packing his bags that the RB Leipzig striker was being eyed as a possible replacement. It actually made sense.

Werner, aged 23, has enjoyed three fruitful seasons in Leipzig, directly contributing to 28, 21 and 26 goals. The Germany centre-forward has proved he is capable of taking the next step and he has spoken of his desire to do just that.

The former Stuttgart striker was also a year from free agency, which presumably appealed to Ed Woodward. United were not the only ones to have their attention piqued; Bayern Munich have also been heavily linked with the striker. That appears to be United’s biggest problem if indeed their interest in Werner was genuine.

Reports suggested Bayern were willing to wait another year and sign Werner for nothing next summer. For Leipzig, that was hardly a satisfactory outcome so they appear to have compromised. Werner signed a new deal late in August but within those terms there is said to be a startlingly low release clause of around £30m which suggests Leipzig are ready to lose the forward in the not-too-distant future.

Such a figure is unlikely to put off Bayern next year and perhaps a deal has already been agreed between the Bavarians and Werner. Until it is signed, there could be an opportunity for United to make their move. But the fact they did not in summer indicates that Werner’s future has already been decided and it does not involve the Red Devils.

Moussa Dembele
So we turn to Lyon striker Moussa Dembele. United were also reported to be eyeing the 23-year-old during the summer but their interest never appeared to go beyond the enquiry stage. They have continued to monitor Dembele, though, and presumably they have been impressed with what they have seen.

The former Celtic and Fulham striker has scored six goals in seven matches during the early part of the Ligue Un season. In the three matches he has failed to find the target, Lyon have lost 1-0. His record in recent weeks follows 20 in all competitions for Lyon last term.

Dembele’s form has given Lyon boss Sylvinho something of a headache. The new boss prefers a 4-3-3 system with one central striker, but Dembele and Memphis Depay both have eyes on the job. While they jostle for position, they have got 11 goals between them.

At some stage a decision will have to be taken over who Sylvinho chooses as his first-choice striker. That may well be influenced by outside interest in either Dembele or Depay. If United opt to make a move and are willing to pay an acceptable price for Demeble, who still has over three and a half years remaining on his contract, then Lyon are likely to welcome a lucrative solution to selection problem.