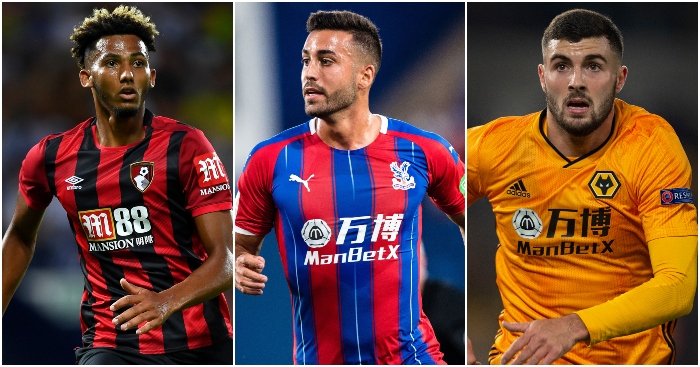 Ezri Konsa (Aston Villa)
The £12million defender would have been hoping for more involvement after moving to Villa Park from Brentford in the summer. Konsa played for Dean Smith at Griffin Park so the Villa boss knew exactly what he was getting.

So it might have been a worry for Konsa that prior to last week, he was yet to make his full Premier League debut. The 22-year-old was charitably given 15 minutes in the 5-1 win at Norwich but otherwise, another summer arrival in Bjorn Engels – a rookie in English football – was the man chosen to partner Tyrone Mings.

But Engels missed the short trip to Wolves with a hip injury, allowing Konsa and first Premier League start. And despite a 2-1 defeat, Konsa’s full debut went so well that we might be seeing more of him in the not-too-distant future. “I thought Ezri was one of our best players today,” said Smith.

The Villa boss has a decision to make ahead of next Monday’s visit of Newcastle. Recall Engels, who has formed an impressive-looking partnership with Mings, despite the concession of 20 Premier League goals; or keep faith with his other new boy. Either way, Konsa’s debut suggested that we’ll be seeing  a lot more of him than we have so far. Not that that’s saying much.

Only positive from today was Ezri Konsa #AVFC

Lloyd Kelly (Bournemouth)
There was talk in the summer that Bournemouth had got an absolute bargain in Kelly. Eddie Howe gave Bristol City £13.5million for a left-back who it is suggested will soon become a centre-half. Possibly for England.

Liverpool were certainly keen on Kelly but rather than occupy the Reds’ bench, the 21-year-old opted for Bournemouth where he would see regular action. Only, it hasn’t worked out that way.

Kelly sustained an ankle injury during pre-season which kept him out until September. He played 90 minutes in the Carabao Cup defeat to Burton but hasn’t been seen in Howe’s side since.

The manager has offered some encouragement: “He’ll get an opportunity to show how good he is. The beauty of Lloyd is he can play different positions. He’s got a versatility about him, which gives him more chance to play.”

It hasn’t done him much good so far.

“But he’s in a very good place,” Howe insisted. “He’s shown very good professionalism, wants to learn all the time, stays out, he’s one of the last off the training pitch every day so I think he’s going to have a great career.”

Few thoughts on Lloyd Kelly. Think it’s been obvious for a while he would be leaving #BristolCity this summer. A wonderful talent who will prove a bargain for #afcb. Won’t be too long before he’s starting for England. https://t.co/yAZvUvq1oz

Patrick Roberts (Norwich)
Perhaps the only people who haven’t forgotten that Roberts joined Norwich in the summer are the Celtic fans who were gasping to get him back for a third loan spell at Parkhead in the summer.

But City opted to send Roberts to a domestic rival to get the winger some Premier League action after an underwhelming spell at Girona last season. But, again, it’s turning out to be a disappointing season for the 22-year-old.

Roberts has managed 23 minutes in the Premier League over three consecutive substitute appearances during defeats to Burnley, Crystal Palace and Aston Villa. Since that 5-1 drubbing to the Villans when Roberts played just under a quarter of an hour, he hasn’t been seen in Daniel Farke’s matchday squad.

Before that brief run, Farke explained Roberts’ absence: “After pre-season and in the beginning of the season there was a period when he seemed to be a bit tired.” Perhaps those 24 minutes have wiped him out again.

This is the Patrick Roberts I know, doing it in the Champions League.

Whatever the reason, the lad has undoubted quality and hopefully he can get a run in the team.

I’d take him back at Celtic in a flash. pic.twitter.com/w9l3hXKWzj

Victor Camarasa (Crystal Palace)
“He will offer us creativity in midfield,” said Palace chairman Steve Parrish, perhaps more in hope than expectation, given he was handing his new signing over to Roy Hodgson.

Camarasa, on loan from Real Betis, impressed during a Cardiff campaign which ended in relegation but there were plenty of Premier League clubs willing to hand the 25-year-old the chance to stay in the top flight. Palace did just that but Hodgson won’t let him actually play in it.

So far Camarasa has had just a few minutes all season – the last five in a 4-0 defeat at Tottenham. Hodgson is perfectly content with his midfield unit of James McCarthy, Luka Milivojevic and Cheikhou Kouyate. Camarasa does not seem to be the kind of player to slip seamlessly into Hodgson’s hard-grafting engine room.

Hodgson explained Camarasa’s situation: “He is competing for places in what we regard as an area where we are blessed with players.” January probably can’t come quick enough.

Victor Camarasa texting Roy Hodgson in June after returning to Spain having made 0 Premier League starts in a Palace shirt…pic.twitter.com/UOqouXwDmY

Patrick Cutrone (Wolves)
The Wolves striker has played a bit more than the other four on this list but not enough so that when I read that his agent had denied talk of leaving Molineux, I wouldn’t think: “Oh yeah, he’s at Wolves now.”

What did his agent say? “We’ve never thought of leaving Wolves, I don’t understand why certain news comes out. He remains in England one hundred percent.”

It would be premature of the 21-year-old to consider his options just yet. Since joining Wolves from AC Milan for £16million, he has made only three Premier League starts but he has come off the bench on six other occasions. His only goal came in the 5-2 defeat to Chelsea. Cutrone has also played a part in eight Europa League matches. So he is hardly redundant. He just hasn’t done much of note yet.