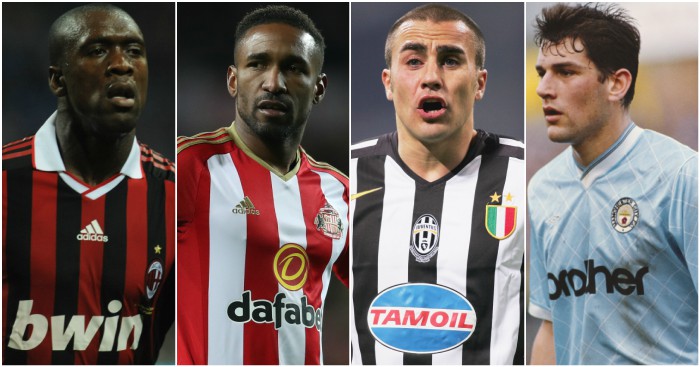 Straight swap deals are often discussed but almost never happen. Much like the Alexis Sanchez and Henrikh Mkhitaryan situation, these are the exceptions that prove the rule.

David White and David Rocastle
Davids Rocastle and White, both sublimely talented players looking for a fresh start, indulged in a swap deal in 1993, with Manchester City ending the former’s ‘bad experience’ at Leeds.

“People ask me why I was not in the team and I honestly could not answer. Through no fault of my own I was not able to play,” bemoaned former Arsenal hero Rocastle, who didn’t want to leave Highbury for Elland Road in the first place. Howard Wilkinson was asked why the midfielder started only 17 games: “It has happened because of a player who is not bad called Gordon Strachan, but David Rocastle is a magnificent human being. If I had a daughter free…”

It didn’t get much better for Rocky at City, with the former England international scoring twice in 21 games during just half a season at Maine Road. White fared little better in Yorkshire, with further injuries blighting his two years at the club.

Clarence Seedorf and Francesco Coco
Only Clarence Seedorf could swap Inter for AC Milan and still remain respected by the Nerazzurri. He crossed the Milan divide in 2002, with Italy international Francesco Coco heading in the opposite direction having failed to usurp Paolo Maldini as the Rossoneri’s left-back. Which is fair enough.

Milan got a decade’s worth of service out of Seedorf, who won two Serie A titles, a couple of European Cups and still looks like he could boss a midfield aged 41. Coco spent his five years at Inter either injured, on loan, chasing women or trying to forge a TV career.

Having fluffed a trial at Manchester City in early 2007 after turning up puffing on a cigarette, Coco retired upon the early termination of his Inter contract and reportedly became a real estate agent in Milan after returning from Hollywood with his tail between his legs.

Fabio Cannavaro and Fabian Carini
Inter got the raw end of the Seedorf-Coco deal but they were royally stiffed by Juventus in summer 2004.

According to Cannavaro, he was ‘ditched’ by Inter, regardless of his desire to stay. So he moved to Turin on the same deadline day as Zlatan Ibrahimovic – a decent day’s work by anyone’s standards – in exchange for reserve goalkeeper Fabian Carini, with both players supposedly valued at around 10million euros, despite Cannavaro having cost 23million euros two years previously and Carini never having played in Juve’s first-team.

The centre-half shook off the injury problems he had during his second season at Inter to establish himself as Italy’s World Cup-winning captain and one of the game’s finest defenders. He made 96 appearances in two seasons, winning the Ballon d’Or, before joining Real Madrid when the Calciopoli scandal saw Juve relegated to Serie B.

Carini, despite being Uruguay No.1, made only four Inter appearances in three years. He had as much success usurping Francesco Toldo and Julio Cesar as he enjoyed trying to dislodge Gianluigi Buffon from the Juventus goal. Carini also failed to establish himself during a loan spell at Cagliari before moving to Spain to sit on Murcia’s bench.

Jozy Altidore and Jermain Defoe
The USA striker had failed at Villarreal and Hull, but a purple patch at AZ Alkmaar persuaded Sunderland to part with £6.5million for Jozy Altidore. However, the targetman was more Afonso Alves than Ruud van Nistelrooy, scoring just one Premier League goal in 42 appearances.

“I don’t think anybody has it easy there. It’s a tough place to play – there’s no other way to put it.” Hard to argue with Altidore on that score, but Defoe, who Sunderland acquired from Toronto FC in a swap for the USA star, has fared better than most, despite the Black Cats’ subsequent relegation. Former manager Sam Allardyce was certainly delighted to inherit Defoe rather than Altidore.

“Having just been reminded that he was swapped for Altidore, it’s one of the best bits of business the club has done for a long time, with all due respect to Mr Altidore,” said Big Sam, no doubt with the utmost sincerety.

Jose Antonio Reyes and Julio Baptista
Arsenal and Real Madrid exchanged misfiring strikers on deadline day in summer 2006, though neither club was willing to commit to anything longer than a season-long loan deal.

Reyes didn’t seem that keen to commit to Arsenal either. Less than a week after making his debut in 2004, the club’s record signing from Sevilla said: “My desire is to return. I will always be Sevillista and that fondness is always something special and will continue. The referees whistle a lot and take control. They do not whistle half as much in Spain.”

The striker was glad of the whistle when the Neville brothers kicked him around Old Trafford when the Arsenal Invincibles surrendered their historic unbeaten run in 2004. Having scored 16 Premier League goals in 69 appearances, Reyes was desperate to return to Spain, with Real Madrid willing to offer him the chance to do just that.

They sent ‘the Beast’ in exchange but Baptista struggled in the Premier League, scoring just three goals. He managed one more than that in a single League Cup tie against Liverpool at Anfield. Both strikers were returned to sender, before Arsenal sold Reyes to Atletico for £6million, taking an £11million hit on the Spaniard.