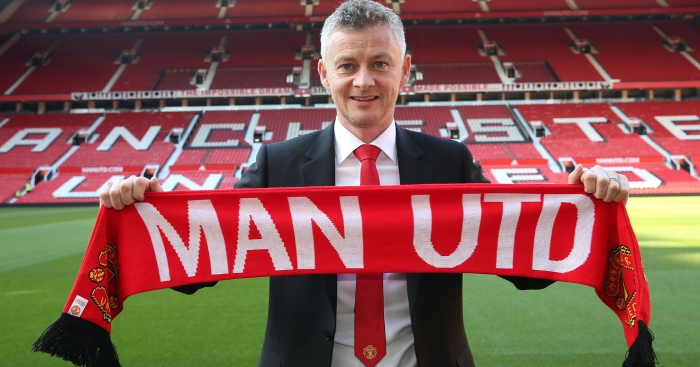 Manchester United have settled the issue of their managerial vacancy by appointing Ole Gunnar Solskjaer on a three-year contract. Now that’s done, United can begin dealing with other important matters…

Tie down Mike Phelan
The initial announcement of Solskjaer’s three-year contract included no update on the manager’s coaching staff. Perhaps United are keen to prolong the positivity by eking every last drop of engagement out of #announcePhelan but, also, there are likely to be some loose ends to tie up before confirming that the former midfielder is sticking around to remain as Solskjaer’s sidekick.

During the international break, Phelan has been in Australia, checking back in with Central Coast Mariners, where he remains sporting director. Presumably there will be a compensation package due, if it hasn’t been arranged already, but it would make no sense for any party to hold up an agreement.

Solskjaer has made no secret of how important Phelan’s input has been since he got the call to return to Old Trafford while he was filling his time last December by coaching at a college in Burnley. “Mick’s absolutely brilliant,” Solskjaer said in January. “With his experience, his knowledge and personality around the place. Not just for the players and coaches, but the rest of the staff as well.

“We’ve been here so many years that we know people. We talk about a family and when you’ve known people for 25 years, it’s easier to create a good atmosphere. Mick’s tough but he’s kind. He’s got everything I would want in an assistant.”

Phelan is another link to the Sir Alex Ferguson era, having initially played for United’s most successful manager ever between 1989 and 1994 before then becoming one of Ferguson’s assistants during his final seasons at Old Trafford. He was Fergie’s good cop and he performs the same role for Solskjaer – who eventually had to play bad cop after the Wolves defeat in the FA Cup.

Presumably, Solskjaer will also be keen to tie down the other members of his backroom staff. He brought coach Mark Dempsey back to the club while inheriting Michael Carrick and Kieran McKenna from the previous regime. The future of goalkeeping coach Emilio Alvarez, a close confidante of David De Gea, will most likely be directly linked to whatever choice the United No.1 makes about his own options.

This weekend, @Mike_Phelan_1 will take his place in the dugout at Old Trafford, but the @ManUtd Assistant Coach will still have one eye on Gosford.

Finish in the top four
A Champions League spot looked almost impossible while the club tore itself apart during the final days of the Jose Mourinho era – the players admit as much – but Solskjaer’s incredible record since taking over has put them firmly back in contention. So much so that failing to finish in the top four would be seen as a huge disappointment.

The Champions League is the natural habitat for a club the size and stature of United. The competition needs them, but far more, the club needs the Champions League. Three years out of six absent from Europe’s most prestigious and lucrative platform is far too many.

The consequences of finishing outside the top four while failing to pull off a most unlikely Champions League triumph would have far-reaching effects on United’s recruitment plans and their finances. The club’s bank account could absorb the blow, even if it would make Ed Woodward and the rest of the United board wince, but the inability to offer summer transfer targets immediate Champions League football could restrict their plans to strengthen Solskjaer’s squad.

Perhaps that potential disappointment is part of the reason why United are apparently looking at English talent like Aaron Wan-Bissaka, Declan Rice and Jadon Sancho – players who have grown up in in an environment and an era where United’s aura can match that of the Champions League. For top players from the continent or beyond, more often than not, United’s history is no compensation for an immediate future without playing in the European Cup.

After the defeat at Arsenal prior to the international break, United are in fifth, one point above Chelsea but two points off the Gunners and three back from Spurs. The Red Devils could do with a similar injection of impetus they took from his caretaker arrival if they are to power down the eight-game final straight and into the Champions League again.

Appoint a sporting director
United have been toying with the idea of appointing their first sporting director since Ferguson retired and the notion gained more momentum with Mourinho’s removal. It was presumed that the successful candidate would play a major role in appointing the new manager, but Solskjaer’s success has made it impossible even for Woodward to make the wrong pick.

Woodward was in congratulatory mood upon announcing Solskjaer’s three-year contract but the executive vice-chairman must not be lulled into thinking the new manager’s success diminishes the need for a sporting director. Solskjaer can take the first team and have a say in the overall shape of the club, but United is simply too big for only one figurehead on the football side of the organisation.

Louis van Gaal should know. The former boss spoke to the BBC about the chasm in United’s hierarchy.

“At the moment there is a structure with a scouting division and above that is someone at Woodward’s right hand,” the Dutchman said. “The structure is not so bad but the right hand has to be a technical director with a football view, not somebody with a banker’s role.”

While Solskjaer has been creating a buzz around himself and his team, the noise around such an important appointment has died down. We know no more now than we did three months ago about who could take the sporting director’s position, or even the job specification. United fans have to hope that Woodward is working away quietly in the background because, really, the new man needed to be in his post in plenty of time before the summer to help shape an important period for recruitment.

32 – Since Ole Gunnar Solskjaer’s appointment at Man Utd in December, the Red Devils have won more points than any other Premier League team (32). Wheel. pic.twitter.com/J2gHZBEAwg

Plan for a pivotal summer of recruitment
The lack of a sporting director and the uncertainty over the identity of the permanent manager has made plotting a way through the huge upcoming transfer window a complicated business. United’s recruitment too often has been a shambles in recent years, with little apparent planning and logic sometimes too hard to fathom.

Last summer, Mourinho appeared the man best qualified to make decisions on potential targets but the window ended with Woodward briefing journalists over why the manager’s choices had been vetoed. Was it Woodward himself, a former chartered accountant, who decided he knew best? If not, who else was making decisions that exacerbated United’s struggles through the first half of the season?

This year, United have to right the wrongs of last summer while looking towards next season. Mourinho needed a centre-back then and Solskjaer still does now. The new manager is also said to be hoping for a full-back, a forward and perhaps a midfielder, especially if Ander Herrera is on his way.

Solskjaer says he has had an input into identifying targets and United fans hope his has been the biggest say, because the evidence of recent windows suggests no one above him can be trusted to make a success of a pivotal transfer window as the Red Devils look to use their financial heft to rein in Manchester City and Liverpool. The presumption is that after having had their fingers burned by a short-term approach, United will look for targets with longevity as well as top-class talent.

If Solskjaer gets the four players he might need, then room needs to be made in the squad and on the wage bill. Herrera and Juan Mata are two players he perhaps wishes to keep but their futures look to be in Woodward’s hands now, while Antonio Valencia and Matteo Darmian look certain to leave Old Trafford this summer. Alexis Sanchez too, in the unlikely event United can find a patsy to take him off their hands.

Lay the foundations for three years of Solskjaer – and beyond
United also have longer-term decisions to make on the shape of the new manager’s squad. The future of De Gea is an issue every bit as important as any potential signing this summer as the goalkeeper approaches the final year of his contract.

There are said to be a number of factors in De Gea’s decision; one being qualification for the Champions League, the other revolving around a pay-packet his status as one of the world’s best goalkeepers deserves. United can affect both issues and should the opportunity arise this summer, then the club should do what it takes to preserve the security of their goal for the foreseeable future. If they fail to swiftly resolve the issue, their bargaining position will only weaken as the clock ticks down to free agency. Perhaps United have already missed their best chance and they should be making contingency plans to identify a replacement – one that would most likely cost more than De Gea’s renewal.

This time next year, United could be in a similar position with Paul Pogba. The France midfielder, contracted until 2021, is already testing patience by fluttering his eyelashes at Real Madrid, now Barcelona’s interest has waned. If Pogba reaches goes another 12 months with no change in his contractual status, he and Mino Raiola are sure to be an irritation the club do not need. Decisive action, whatever that may entail, in the coming months may be necessary to avoid such a prospect.

Commitment, in terms of time and mentality, is not a problem with many of the young players Solskjaer has championed throughout his caretaker stint. Giving opportunities to the likes of Tatith Chong, Angel Gomes, Mason Greenwood and James Garner has been one of the policies upon which Solskjaer has built his campaign for the permanent job. Offering them all a taste of the first team was the easy part; the tricky bit comes in planning their pathway to becoming regulars.