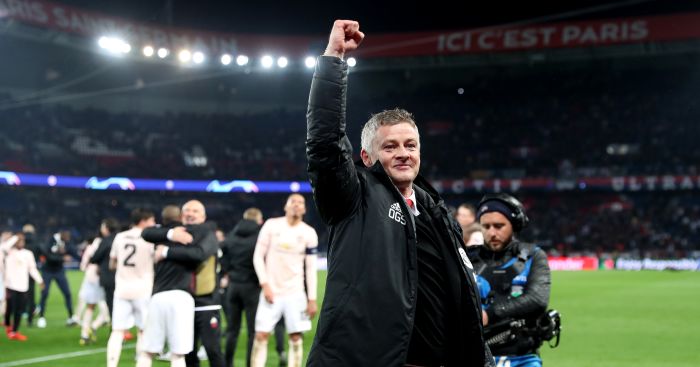 It’s the morning after the morning after Manchester United’s stunning win at PSG and for some reason, Ole Gunnar Solskjaer hasn’t yet been given the permanent manager’s job. Here’s just a few things the caretaker boss has done to make himself the only candidate…

Embraced United’s heritage
Seemingly not a press conference or an interview passes without Solskjaer making reference to some part of Manchester United’s heritage. Of course, those posing the questions are only too happy to prompt the caretaker boss on the subject of history, but much like his playing days, Solskjaer will never miss an open goal when he is given the opportunity to evoke memories of the glorious past and – crucially – the role he played in forging it.

So he bloody should. The rookie coach’s USP centres around the ties he has to the United of old, the United that seems to have been forgotten in recent years. In their futile efforts to forge their future at the club, David Moyes, Louis van Gaal and Jose Mourinho all sidelined its history in a vain attempt to apply their stamp.

Like Gary Neville said almost two months ago: “No one should ever be allowed to enter Manchester United Football Club ever again and adopt a different philosophy to the one the club has.” While a rebuilding job was eventually required after Sir Alex Ferguson’s glorious reign, the foundations upon which the club was built required no remedial work whatsoever. Faces may change but principles need not.

His predecessors tried to reinvent the wheel, Ole’s just at it. Despite the apparent mess he inherited, Solskjaer recognised that the framework was in place to use the past in the present to build towards a better immediate future. The kind of glory that the former striker was a part of – and the triumphs that inspired him and his old team-mates – should be used to motivate, rather than be hauled around as a dead weight around the club’s neck.

Solskjaer’s critics and the tinfoil-hat hat brigade suggest the caretaker boss is a mere puppet while Ferguson pulls the strings. That plainly is not the case, but why should Solskjaer not follow Ferguson’s lead? Why not tap into one of the greatest managerial minds that ever lived?

Perhaps of Moyes, Van Gaal and Mourinho had rolled into Old Trafford and immediately started harking on about ’68 or ’99, they might have been viewed even more suspiciously than they were when each tried distance themselves from it, reducing the weight of expectation that history has created. Solskjaer is one of the few figures who can legitimately talk such talk. And it bloody works.

Kept it simple
“At Manchester United you play fast, attacking football in an entertaining way. You bring young players through and give them belief. And you win.”

United’s approach really is that simple. Neville grasped it, and so has Solskjaer. And if any manager satisfies the first two demands, then they will earn patience to achieve the third.

Van Gaal and Mourinho, two coaches famed for overbearing micro-management, certainly over-complicated the job while they were in power. They will argue that the expectations upon them were far greater than what has been demanded of Solskjaer, though it is their failings that have put the caretaker boss in a position to have a free hit.

But crucially, when – it must be when, not if – Solskjaer is given the job, the need to plan over a longer term would not change his approach. His United will maintain an attacking philosophy; they will entertain; and the kids will continue to be given their chance. Granted, Solskjaer is fortunate that his return to the club has coincided with the likes of Tahith Chong, Angel Gomes, James Garner and Mason Greenwood pushing through to the first team. But Mourinho almost certainly would not have banked on Chong or Greenwood late on in Paris, regardless of the lack of alternatives.

Mourinho and Van Gaal see themselves as master tacticians, with both seemingly intent to show how many formations they can use without ever settling on one. Solskjaer has kept things rather more straight-forward, adopting a United-first approach, even if that has meant sometimes stepping off the front foot. Some of his best victories have been achieved with a deficit of possession.

There are no square pegs in round holes. Paul Pogba sees himself as an attacking midfielder so Solskjaer uses him as one. Romelu Lukaku, despite his size, isn’t a hold-up centre-forward so the manager doesn’t employ him that way. Marcus Rashford isn’t a winger, so Solskjaer trusts him to play up front.

None of this is complicated stuff, but no manager since Ferguson has seen the benefit in putting the emphasis on his players’ attributes rather than his own.

Surrounded himself with the right people
The first two changes Solskjaer has been able to make is down in no small part to this one. The caretaker boss has utilised Michael Carrick and Kieran McKenna, two coaches Mourinho reportedly marginalised as the walls closed in, while bringing back Mike Phelan, who was coaching at a college in Burnley when the call to return came.

By reinstating Phelan to the Old Trafford dug-out, Solskjaer corrected Moyes’ first big mistake. The former United midfielder assisted Ferguson throughout the final years of his reign and knew the club inside out. But Moyes preferred his own men, namely Steve Round and Jimmy Lumsden, with just-retired Phil Neville brought along to offer a token link to United’s past. Fergie’s lieutenants, Phelan and Rene Meulensteen, weren’t required, which Meulensteen saw as a mistake. “United were a very successful team, with many successful years behind them, the strategies in place worked,” he said after Moyes was axed. “But David ignored the advice that was given to him by many of the staff in place at the time.

“I did warn him: ‘Do you realise, after everything at Everton, you’re going from a yacht to a cruise liner?'”

The club ran aground under Moyes, while Van Gaal and Mourinho showed little evidence of knowing how to guide it back to calmer waters. While Solskjaer understands United like few others – and Carrick and McKenna know this squad and the youngsters coming through better than anyone – Phelan, having assisted Ferguson through his final glory years, has provided an invaluable insight for the caretaker boss, on the coaching field, in front of the tactics board and in the ear of the players.

I seem to remember this great football club #ManchesterUnited coming from behind before 😉 ⚽️ final training session .. bring it on pic.twitter.com/e8io4mJjGX

Fresh starts for everyone
When Mourinho was axed, many supporters felt like vast swathes of his squad should follow him out of the door. Especially Pogba.

The World Cup winner phoned it in during the first half of the season, with both player and manager sharing the responsibility for his poor performances. Indeed, there were plans for Pogba to encounter a far less welcoming reception than Solskjaer upon the new manager’s first game in charge at Cardiff. But Solskjaer saw fewer benefits in holding grudges and offered a clean slate to Pogba and anyone else who had long since stopped playing for Mourinho.

To the players’ credit, almost without exception, they have seized the opportunity that has been presented to them. Pogba is repaying the faith Solskjaer demonstrated by immediately bringing him back in from the cold, while Anthony Martial is so much happier that he has signed a new contract – something which appeared most unlikely under the previous regime.

Even the few players to whom Mourinho’s exit appeared to be at their detriment have flourished. Lukaku – now he is no longer facing his own goal – is on fire again while Nemanja Matic has paired with Ander Herrera to form a defensive midfield partnership that seems so obvious, it’s hard to believe it was barely ever used before.

Positivity is paying
Lukaku said he appreciated Mourinho’s ‘realness’, especially in contrast to some of his perma-positive counterparts. But there is no doubt that Mourinho had strayed over the line between ‘real’ and ‘downright sodding miserable’.

After Mourinho’s stick, Solskjaer’s carrot is like manna from heaven for United’s browbeaten players. The most common theme we hear coming out of Carrington focuses on how Solskjaer ‘has changed the mood’, not just within the squad but throughout the whole club.

On his first day, he walked back in with a box of chocolates for the receptionist before borrowing Daley Blind’s old club suit to attend the staff Christmas party, thrown for employees who had long ago grown used to Mourinho’s cold shoulder. Nice touches, but more importantly, Solskjaer has given obviously-talented players the belief and faith that anyone needs to perform.

“When you play football for Manchester United you should be happy,” said Solskjaer only a week after his appointment when asked about Pogba’s performances. “Of course it’s a responsibility but it’s an honour and a privilege.”

Having initially put smiles back on faces, Solskjaer has been willing to offer justified criticism to his squad in the correct setting, with the foundations for the triumph in Paris perhaps being laid during a dressing-room dressing-down for his players after the first leg. But, unlike his predecessors, Solskjaer adopted a positive tone immediately, paving the way for a hugely impressive FA Cup win at Chelsea.

Again, there is nothing revolutionary is recognising that happy employees make for greater productivity. But it remained a theory still too complex for the three previous permanent managers before Ole took the wheel.