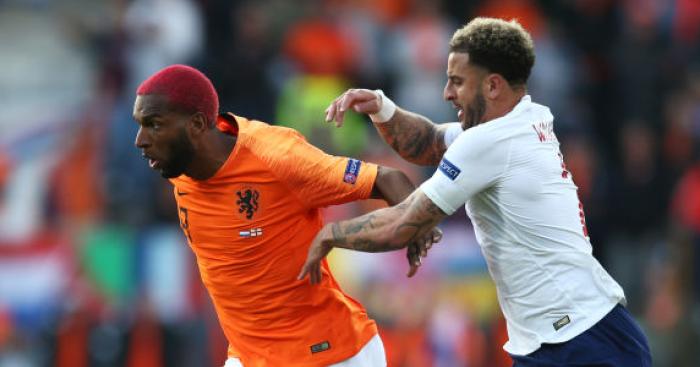 1) Busy Jordan Pickford is not a keeper for this England side
There’s just too much going on. While Gareth Southgate is trying to engender an era of calm, smooth, possession football – and failing, because of various reasons outlined below – Pickford is getting his rave on. Every game. All game. Everything looks rushed and yet at the same time delayed, and there is not one single second where you think ‘it’s okay, Pickford’s got this one’.

Making wonderful saves might be all you want from a goalkeeper in the mid-table of the Premier League, but at elite international level, we would quite like a goalkeeper that does not give us the raging heebie-jeebies. In a parallel universe, there might be an England side that would be very glad for his ‘pulls off an amazing save but then falls over his shoelaces while flicking v-signs to the crowd’ schtick, but he absolutely does not suit this one.

2) England’s defence is susceptible to a clusterf***
Just because it was John Stones’ clusterf*** this time does not mean that he should be in line for any more castigation than Kyle Walker, Harry Maguire or Ben Chilwell. There but for the grace of whichever deity/foodstuff you happen to believe in, and all that. They all made terrible decisions, they were all sloppy and they could have all been responsible for a Dutch goal. It was so bad that Gary Neville wondered out loud whether we should return to a back five, though we cannot help but think that just increases the chance of a defensive mistake by 25%.

Stones, Maguire + Walker have combined to give the ball away cheaply infront of their box 7 or 8 times tonight. Not cause they’re taking progressive risks either, just all getting lazy when under no pressure + running into trouble…oh another one..

Stones has always had the capacity for a brain fart – and that’s nothing to do with ‘playing from the back’ and everything to do with a lack of focus – while Walker learned to run very fast long before he learned to think. And then there’s Maguire, king of those awkward strides from defence beloved of fans but equally fond of letting the ball run away from his feet and then attempting a WWE grapple to regain possession.

There will be those who say the whole lot should be replaced – and Trent Alexander-Arnold is certainly making an excellent case for a right-back spot – but the truth is that there isn’t a ready-made Rio Ferdinand just waiting to be promoted into this England side. No pressure Joe Gomez, but we need you to be bloody brilliant.

3) England do not have a single world-class midfielder
Not one. Jordan Henderson may have just lifted the Champions League – and he really is a hero – but let’s not kid ourselves that he can control a game against the best midfielders in the world. We’re not even sure that Henderson himself would claim that. Let’s not even embarrass ourselves by mentioning Eric Dier, while Declan Rice looks a long, long way short of Frenkie De Jong, which is hardly surprising as one has been schooled by Ajax and the other by West Ham.

There was a lot of talk of Harry Winks on Thursday night (particularly from Gary Neville) as he is one English player who can operate on the half-turn, but we have broken too many eggs in a Jack Wilshere-shaped basket to put much faith in another diminutive, injury-prone midfielder at a north London club. And we would need more than one Harry Winks.

The one English midfielder who I think can help with this is Harry Winks. Probably our best option for keeping the ball and linking the play in the middle. Shame that he wasn't deemed fit enough for the 23 despite starting the CL final.

The fact that Fabian Delph started for England having not started a single Premier League game since Boxing Day (and that was at left-back in a game that City lost. Oh and he was sent off) is utterly, utterly damning. Anybody want to sign a petition begging Jurgen Klopp to play Alexander-Arnold in midfield for (not his) queen and (not his) country?

Ross Barkley, Ruben Loftus-Cheek, Alex Oxlade-Chamberlain, Dele Alli…all are options for the third central midfield spot and all are seriously flawed (though we are curious about seeing the Ox after a full pre-season with Klopp). Can James Maddison play in that system? We bloody hope so because right now, not a single one of those players is anywhere close to world class.

4) England’s best weapon is pace. Full stop.
Southgate made absolutely the right decision to ‘rest’ Harry Kane against Virgil van Dijk and Matthijs De Ligt as England’s best weapon against that defence was always pace; those big guys do not like being turned around. Without Marcus Rashford’s speed of thought and feet, England would not have scored at all against the Netherlands. Whether Southgate would have the balls to make the same decision again is highly questionable. What will most likely happen is that Kane will score goals in qualifying for Euro 2020 – and then through the group stages – but will be shackled easily later in the tournament.

Defences are largely petrified of pace at any level, and England are currently blessed in that department. At a time when we are blessed with basically bugger all else, we have to accept our standing as the team with very pacey forwards. The slight problem is that we don’t have the midfield to create chances for those very pacey forwards. The fact that Kieran Trippier created 22 chances at the World Cup and his nearest England player on that measure was Sterling with seven is telling.

So as much as we know that 4) is true, they are severely hampered by 3), which in turn contributes to 2), which may well have some of its roots in 1). Oh dear.

5) Some England fans are c***s
Don’t pretend this is new information.