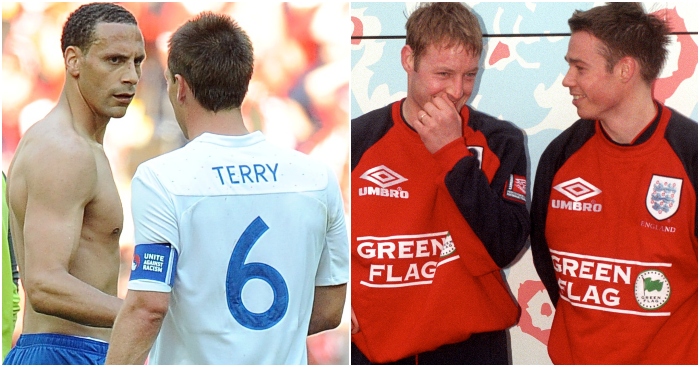 Raheem Sterling getting hold of Joe Gomez is hardly the first time England team-mates have fallen out. Sometimes it was trivial, others rather less so…

Andy Cole and Teddy Sheringham
“I would rather sit down and have a cuppa with Neil Ruddock, who broke my leg in two places in 1996, than with Teddy Sheringham, who I’ve pretty much detested for the past 15 years.” Andy Cole didn’t mince his words when talking to The Independent in 2010. He was happy to explain why…

“It was early 1995, I had recently signed for Manchester United, and it was my England debut, against Uruguay. I was a sub. I came on for Sheringham after about 70 minutes. You’ll need to understand what was in my head at that moment to get even close to comprehending my reaction to what happened next.

“I was so nervous it was frightening. This was the culmination of a lifetime of ambition. You hear the cliché “it means everything to play for my country”. But trust me, it did. Not just for me, but for my family, my parents especially, who had endured all kinds of hardships to give us the chances we had. Becoming a pro had been incredible. Now the magnitude of playing for England was indescribable. The moment has arrived.

“I walk on to the pitch, 60,000 or so watching. Sheringham is coming off. I expect a brief handshake, a “Good luck, Coley”, something. I am ready to shake. He snubs me. He actively snubs me, for no reason I was ever aware of then or since. He walks off. I don’t even know the bloke so he can’t have any issue with me. We’re fellow England players, it is my debut and he snubs me.

“You know what my immediate thoughts were? “Jesus Christ! How many people just saw Teddy Sheringham do that to me?” I was embarrassed. I was confused. And there you have it. From that moment on, I knew Sheringham was not for me.”

You can imagine how chuffed Cole was to see Sheringham swan in when United were looking to replace Eric Cantona in 1997. “We played together for years. We scored a lot of goals,” Cole said of a team-mate with whom he won the Treble in 1999. “I never spoke a single word to him.”

Graeme Le Saux and David Batty
Our friends at Planet Football have carried out a forensic analysis of Le Saux and Batty’s fisticuffs in Moscow in 1995. Le Saux admitted in his autobiography that running into each other by the snowy touchline was merely the straw that broke the camel’s back.

“People had started looking after themselves rather than playing for the team,” wrote Le Saux of a title defence that was going wrong in the absence of Kenny Dalglish in the manager’s hot seat. “There were a couple of games where David and I had had a go at each other.

“David was one of those players who would always come short to get the ball. Occasionally, I’d tell him he didn’t need to come so close. But if I didn’t pass to him and ended up losing the ball, he’d have a go at me.

“Gradually, that started to worsen. Then, two weeks before the incident in Moscow, I nutmegged him in training and he got the hump. He came after me and I got prickly about that. There was a sharpness developing. The next game, he said something to me about being selfish and I came in at half-time and had it out with him in front of everybody. I told him to repeat what he had said and he backed off. I thought that was it.

“I was frustrated at the way things were going and I knew he was, too, but I thought we had got rid of the problem.”

But everything came to a head in the early stages of a must-win Champions League group game at Spartak Moscow. The scrap has already been dissected and the fall-out left Le Saux with a broken hand as well as wounded pride: “I swung at him, connected and knew immediately that I had broken my left hand. I am not a fighter,” said Le Saux, stating the bleeding obvious.

Joey Barton v Steven Gerrard
Barton actually made a reasonable point in the wake of the 2006 World Cup when Steven Gerrard, Frank Lampard and Ashley Cole were all racing to be first to publish books about it.

Barton fumed: “England did nothing in that World Cup, so why were they bringing books out? ‘We got beat in the quarter-finals. I played like sh*t. Here’s my book’”.

For anyone else, an England call-up might have been awkward the following year when in February 2007, Barton was named in Steve McClaren’s squad for a friendly against Spain.

Gerrard took the opportunity to let Barton critique his words for himself, with the Liverpool midfielder leaving a copy of his autobiography outside his hotel room.

“I’ve signed it for him,” said Gerrard. “You get a lot of time to yourself and I thought he might like to read it.”

Barton played 15 minutes in that friendly then never again for England. He retired from international football in 2013 having played the same number of England games in the previous five years as you or I, though he went back on that decision after the World Cup a year later.

“After reviewing England’s performance at the WC, I have decided to renounce my international retirement,” he said in 2014. “Having seen the standard, I believe it’s possible. Having played at the level before I feel I am a better player now than when I was capped. Now it’s time to put up or shut up.”

Try the latter once in a while, fella.

John Terry v Wayne Bridge
Maybe France had it right in 1982 when Jean-Francois Larios was dropped from their World Cup squad when it emerged that he’s been up to no good with Michel Platini’s wife. Admittedly, the blow of losing Larios was tempered by the emergence of Jean Tigana, which perhaps made it easier for the French to do the right thing.

When England were faced with a similar situation, one you suspect Fabio Capello had little time for, it was the wronged Wayne Bridge who stepped aside, leaving John Terry to keep playing for the Three Lions after playing away with Vanessa Perroncel.

“It has always been an honour to play for England,” said Bridge after Terry’s behaviour had spread to the national press. “However, after careful thought, I believe my position in the squad is now untenable and potentially divisive.

“Sadly, for the sake of the team and what would be inevitable distractions, I have decided not to put myself forward for selection. I have thought long and hard about my position in the England football team in the light of the reporting and events over the last few weeks have informed the management of this decision.

“I wish the team all the best in South Africa.”

Perroncel’s publicist thought it was the wrong move. “I really think that Wayne should think long and hard and reconsider. I think he’s letting himself down as well as his country,” said convicted sex offender Max Clifford.

Bridge didn’t reconsider and he could hardly be blamed if he enjoyed Terry’s struggles as England flopped at the World Cup.

#OTD 2010, Wayne Bridge famously snubbed John Terry's handshake, after it emerged he had been playing away from home pic.twitter.com/NQogX9FIvo

Rio Ferdinand v John Terry
Terry was stripped of the England captaincy after that debacle but the armband was taken off Rio Ferdinand and returned to Terry the following year.

“After one year of punishment, Terry will again be the permanent captain,” said Capello. “I think one year’s punishment is enough.” Wayne Bridge might not agree.

If things weren’t already awkward between Terry and Ferdinand, they became toxic later in 2011, when Terry was charged with racial abuse by police over a clash with Anton Ferdinand in a Chelsea match at QPR.

Terry was cleared in court but was subsequently charged by the FA, which precipitated his retirement from international football.

“I am making this statement today in advance of the hearing of the FA disciplinary charge because I feel the FA, in pursuing charges against me where I have already been cleared in a court of law, have made my position with the national team untenable,” said Terry of his decision to step away from England duty.

Rio was advised to keep quiet while the legal and disciplinary cases were active, but the former Man Utd defender had his say in his autobiography.

“For me, the biggest idiot will always be John Terry,” he wrote in 2014. “As England captain and my centre-back partner he could have saved everyone a lot of pain by admitting immediately he used the word in the heat of the moment, but was no racist.

“I think that’s probably what happened and what the truth is. Anton and I would’ve accepted that – instead he never gave us a chance.

“That was the betrayal. He tried to run away from what he had done.

“I’ve never actually spoken to John about the case. I no longer talk to him, but even three years later I find it impossible to forgive or forget the pain he put us through.”

“Ashley Cole had long been a friend of mine. We’ve known each other since we were kids,” Ferdinand wrote. “But for me it ended the day he decided to go to court in support of John Terry.”