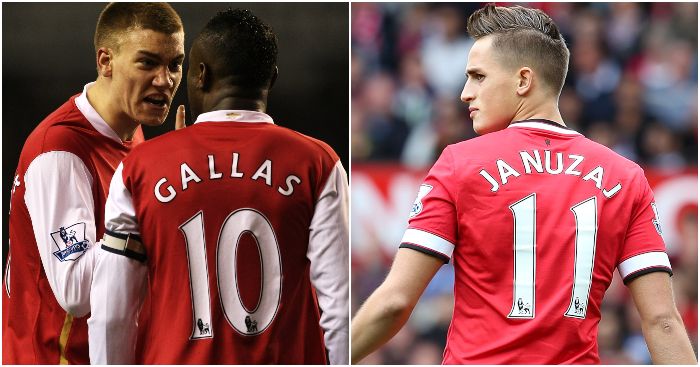 Willian has been handed Eden Hazard’s No.10 shirt at Chelsea. He better hope he gets on better with the burden than these huge disappointments…

Man Utd’s No.11: Ryan Giggs to Adnan Januzaj
United apparently considered retiring the No.11 shirt after Giggs chucked it in the wash basket for the final time in 2014 but the club ‘wanted the legend to continue’. Giving it to Januzaj marked the beginning of the end for the teenage winger at Old Trafford.

He made 21 appearances in his first season with 11 on his back, failing to offer either a goal or an assist. Januazaj was then loaned to Dortmund – disastrously, as it turned out – before he returned to don the jersey just five more times. United offered him one last chance but by farming him out to Sunderland during the darkest days at the Stadium of Light, Louis van Gaal effectively signed the Belgian’s death warrant. He was sold to Real Sociedad upon returning from Wearside, when Anthony Martial was given Giggs’s old number. He wasn’t best pleased about it…

Man Utd’s No.7: Cristiano Ronaldo to Michael Owen
“Manchester United did well to give him the number seven,” said Ronaldo, presumably stifling giggles while getting comfy in his new Real Madrid jersey in 2009. United had taken the £80million world record signing’s old shirt and given it to free agent Owen, who had just been released by relegated Newcastle.

The most simple, most logical explanation is that Ronaldo imposed some kind of dastardly curse to ensure no one ever shone ever again while wearing his old number. Owen’s Old Trafford stint was best described as ‘forgettable’ before he handed the shirt on to Antonio Valencia. The winger had a nightmare before returning to his old No.25 as quickly as possible. Angel Di Maria was presumed to be a worthy occupant of the jersey in 2014 but his pea-hearted performances saw 7 come up for grabs again when Memphis Depay arrived in 2015. The Dutchman flopped spectacularly but Alexis Sanchez has since dragged United’s supposedly sacred number to new depths.

In the decade since Ronaldo took off the shirt for the final time, Manchester United’s No.7 has contributed just 14 Premier League goals.

Arsenal No.10: Dennis Bergkamp to William Gallas
When Gallas went to Arsenal in 2006, two numbers were available: the No.3 Ashley Cole had vacated, or Denis Bergkamp’s old No.10. The defender had better have a good excuse…

“I saw it as a great opportunity as I’d already worn the same number earlier in my career, and my daughter had been born on November 10,” he told FourFourTwo.

“At the same time, it was good for Arsenal that I wore the number. If a young player is given the No.10 shirt, it’ll be far too much pressure on his shoulders. But to me, it didn’t make any difference at all.”

Ah, so by committing one of the most heinous squad number crimes ever, he was doing Arsenal a favour. We blame the club for giving Gallas the choice in the first place.

August 2006: Banter era officially started when William Gallas arrived from Chelsea as part of the Ashley Cole deal. Of all the numbers, Gallas decided to pick number 10, which was vacated by Dennis Bergkamp. pic.twitter.com/7oR0mgXpqz

Newcastle’s No.9: Alan Shearer to Obafemi Martins
Shearer was so desperate for the iconic No.9 jersey, the Geordie demanded it as one of the conditions of returning to his hometown club in 1996. After wearing it with distinction for a decade, the plan was to hand the shirt over to Michael Owen, but the England striker got crocked at the 2006 World Cup, so Glenn Roeder offered it to new signing Martins.

Shearer warned the new boy that he would need broad shoulders to carry the No.9, which Martins most certainly possessed. But his feet were not up to the job of maintaining the legacy of Shearer, Jackie Milburn and Malcolm Macdonald.

That’s not to say he was wretched. Martins averaged nine goals a season over three years, which culminated in relegation in 2009 when his best efforts couldn’t compensate for the half-arsed attempts of Owen and Mark Viduka.

Arsenal No.14: Thierry Henry to Theo Walcott
“I’ve got Thierry’s shirt number now but he’s not getting it back, even if he comes back for a while. I’ve already told him that,” said Walcott in uncharacteristically decisive fashion before Henry returned to the Emirates in 2011.

By that time, three and a half years had passed with Walcott occupying Henry’s jersey, which perhaps was a burden too heavy to entrust upon a slight teenager with a total of four Premier League goals.

Still, he carried it for long enough – nine and a half seasons, to be precise. But by the time he left for Everton after averaging seven Premier League goals a season while adorning a shirt Henry in which broke the club goalscoring record, hope had long since faded of Walcott justifying the tag of ‘the next Henry’.

Pierre-Emerick Aubameyang looks rather more comfortable with Henry’s number, though Walcott’s form at Everton suggests the jersey had little to do with his struggles to justify the early hype.

Me & @thierryhenry – when I signed in 2006 & this week. It seems Thierry hasn’t aged at all!! #FlashBackFriday #Arsenal14