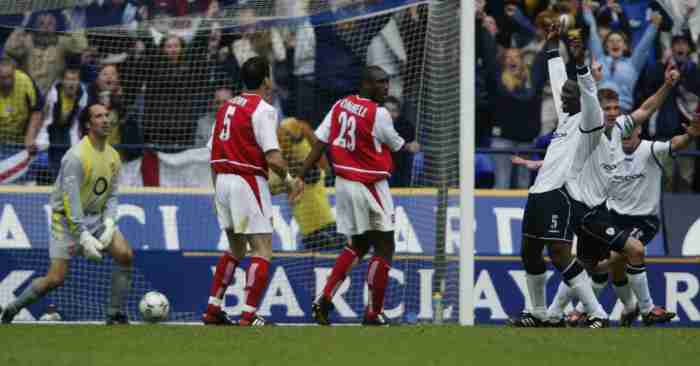 Aston Villa 0-1 Oldham – 1992-93
“The one thing I’m confident about is that our lads won’t bottle it,” said Ron Atkinson, shortly before his lads bottled it.

To be fair to Big Ron, his attempt to turn the screw on Manchester United made sense. A year previously, they had done just the same, even more spectacularly, to gift wrap the Division One title for Leeds. This year, it was Villa looking to provoke a brain fart from Alex Ferguson’s men.

But Villa became the side who dropped points. They lost to third and fourth-placed finishers Norwich and Blackburn before Oldham rammed the final nail in their coffin.

The Latics had to win their final three games just to have a hope of survival. That run-in began at Villa Park, where 37,000 expected the Villans to make United sweat further but Nick Henry’s first-half strike prompted the mother of all parties in Manchester the day before the Red Devils, a few of them hungover, received the trophy after beating Blackburn.

It came as little consolation to Villa, but Oldham didn’t waste the points. They beat Liverpool in midweek before edging Southampton on the final day to survive at Crystal Palace’s expense.

Bolton 2-2 Arsenal – 2002/03
After winning the title at Old Trafford in 2002, Arsene Wenger’s side were looking to deny United again a year later and they looked set to return to the top of the table on goal difference with three games remaining as they opened up a two-goal lead at Bolton courtesy of Sylvain Wiltord and Robert Pires.

Sam Allardyce’s Trotters were only one place above the drop zone and looking uncomfortably over their shoulders but Youri Djorkaeff offered some hope with 14 minutes to go. The French star then earned Bolton a point and denied Arsenal a couple by whipping in a free-kick which glanced off substitute Martin Keown’s bonce on its way past David Seaman.

“In the context of trench warfare, Sir Alex Ferguson has half a dozen players who would be on the front line while some of Wenger’s would be licking stamps and stamping envelopes back at HQ,” wrote Daniel Taylor in his match report for The Guardian. Fergie’s troops indeed seized the initiative by beating Tottenham at White Hart Lane before the shellshocked Gunners lost their next game at home to another relegation contender, Leeds, to present back the title to United.

Chelsea 1-1 Wigan – 2007/08
“We are still in the title race. It is more difficult now but we will still fight away,” said Avram Grant after watching his Chelsea side – in name, at least – let two points slip to a Wigan side glancing over their shoulder, wary of being dragged into a relegation scrap.

Chelsea were masters of their own downfall. “In the second half we played wonderfully,” insisted Grant but the Blues were sloppy in front of goal. They failed to add to Michael Essien’s 54th-minute strike and their profligacy came back to bite them on the arse when Emile Heskey grabbed an injury-time equaliser.

“We need to win the games against Everton and Manchester United,” added Grant while admitting Chelsea were left looking for snookers with four games to go. Indeed they won at Everton and at Old Trafford but it wasn’t enough. They went into the final game of the season level on points but with a vastly-inferior goal difference. They were held by Bolton while United won at Wigan to take the title by two points, but the damage was done by the Latics at Stamford Bridge a few weeks prior.

Wigan 1-0 Man Utd – 2011/12
Prior to the midweek kick-off at the DW Stadium, the talk was of how United, with an admittedly-unlikely set of results, could secure their 20th title the following weekend. Ferguson’s side had won their last eight and in front of them stood a Wigan side they had won all 14 previous encounters against.

So it seemed that United took Wigan too lightly. The hosts opened the scoring through Shaun Maloney’s beauty and the expected rally from United never really came. It took until the 84th minute for the Red Devils to muster a shot on target, and though they were denied a penalty for handball in the second half, so poor was his team that Ferguson refused the opportunity to scorn the officials. Much…

“Referee Phil Dowd had a disappointing night, he never got to grips with it,” said the United manager. “But that doesn’t subtract from the fact we were poor. We only had one shot on target and were second to every ball.”

City winning on the same evening cut the gap to five points and the calamitous 4-4 home draw with Everton less than a fortnight later gave the noisy neighbours the chance to move level on points by winning a derby three games from the finish line. Roberto Mancini’s side did just that, laying the stage for Sergio Aguero’s defining moment.

Crystal Palace 3-3 Liverpool – 2013/14
You can’t blame any Liverpool fans refusing to get too bullish as the season heads towards its crescendo. They’ve been hurt before…

It was in the final three games that it all went horribly wrong five years ago. Steven Gerrard’s slip was heartbreaking/hilarious (delete as appropriate) enough, but what went down at Selhurst Park eight days later compounded the misery/glee.

Brendan Rodgers’ side looked to have put their captain’s stumble behind them when they opened up a three-goal lead against a Palace side with nothing much to play for. With 11 minutes remaining, the Reds were still looking to make a bigger dent in Manchester City’s goal difference advantage, even after Damien Delaney’s deflected shot had given the hosts what was presumed to be mere consolation.

Then was the time to shut up shop, but Liverpool instead held the door open for Dwight Gayle. His late brace still allowed Liverpool to move to the summit, but only by a single point rather than three. “Never has going top of the Premier League with one game to play been greeted by such an outpouring of grief, despair and disappointment,” wrote the BBC’s Phil McNulty after witnessing Luis Suarez and his team-mates stumble away from the wreckage of their title chase.

City won their remaining games, both at home against mid-table opposition, to claim their second title in three seasons, leaving Liverpool’s drought to extend into a 25th year.