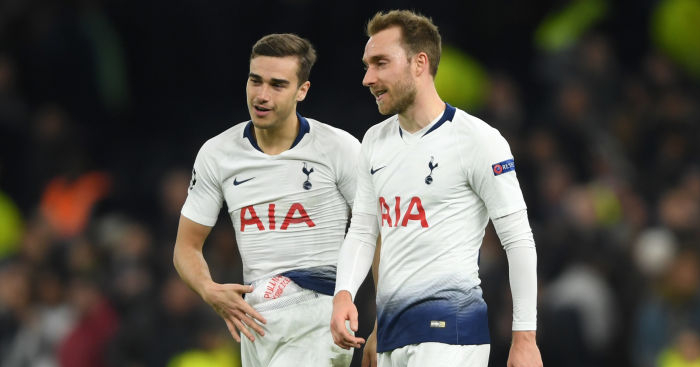 We picked out five Tottenham players we think will thrive under Jose Mourinho, so here are five we think will be dreading his influence…

Harry Winks
Good news for Eric Dier and Tanguy Ndombele is bad news for Harry Winks. Mourinho’s midfields are typically functional: big bodies over short passes; power over precision. Inferior technical ability is a small price to pay for large men who are hard to get past and a presence in both boxes.

Nemanja Matic, Michael Essien, Scott McTominay, Esteban Cambiasso are all examples of the fighters Mourinho covets. Their partners had to provide goals or assists – Cesc Fabregas, Frank Lampard, Wesley Sneijder – but they were there largely to hold the fort.

But Winks doesn’t fit into either of these categories, and while there have been similar ball-retaining examples in Mourinho midfields in the past – Sami Khedira at Madrid for example – they have been the exception rather than rule.

The England international has to be more productive; for Mourinho it really is that simple.

Son Heung-min
If his unintentional injuring of Andre Gomes proved nothing else it was to confirm Son’s emotional fragility as a footballer. The South Korean broke down in tears at the thought of what he had done to a fellow professional, but recovered to feature in Spurs’ next game, no doubt due to Mauricio Pochettino’s outstanding man-management skills and ability to understand the nuances of his individual players.

Needless to say how much I thank this man. Words are powerless to express my gratitude. I have learned a lot from you not only in football, but in life. Good luck in your future and I wish you all the best.💙

It would be unfair to expect Mourinho to immediately form the relationships his predecessor developed over a number of seasons with the likes of Son, but the soft touch seemingly required to allow the enigmatic forward to perform at the outstanding level he has achieved in the last two seasons in particular, is not something the incumbent manager is renowned for. In recent times, as Eden Hazard and Anthony Martial will attest to, it’s been quite the opposite.

Christian Eriksen
He may just have played his last game for Spurs. Pochettino’s attempts to utilise Eriksen’s talents this season – with the Danish international’s head already turned – was a big factor in his demise. And Mourinho won’t make the same mistake.

In the past – notably when Arjen Robben was angling for a move to Real Madrid from Chelsea – Jose cut his losses. The Portuguese manager will want to entrench his career-long ‘us against them’ mentality into the Spurs dressing room. Which won’t work if part of the ‘us’ is already one of ‘them’.

Danny Rose
The England international may now be regretting his public announcement that he will see out his Tottenham contract no matter what. With Pochettino at the helm – whether he was playing or not – the next 18 months would have been comfortable for Rose.

But with “passion” the buzzword from Mourinho’s first interview as Spurs boss, any player not exhibiting the same dedication will likely be marginalised and kept from the prying eyes of those that will jump at the chance to claim everyone at Tottenham is not singing from the same hymn sheet.

While Rose’s openness and forthright attitude is refreshing and powerful when it comes to talking about his own mental health and the racism he’s been subjected to, in a profession renowned for bottling up emotions, should that honesty break the bounds of what Mourinho considers to be acceptable, Rose will see out his contract in the reserves.

[Insert name of young player]
It’s an easy jibe to aim at Mourinho: his unwillingness to put his faith in youth. And he will rightly point to his promotion of Scott McTominay at Manchester United as proof that if a player is worthy of a place he will play him.

But such is the ego of the former United manager, his promotion of McTominay is more likely to have served to increase his desire to side with experience over potential in the future. Mourinho will be sickened by the plaudits Ole Gunnar Solskjaer is receiving for making the young Scot the heartbeat of his midfield, in the knowledge that it was him that handed him his first chance.

Mourinho knows – as we all do – that he will surely be at the club for a maximum of three seasons. Why should he promote a youngster only for another manager to reap the benefits and the acclaim for doing so? Oliver Skipp, among others, will have to look elsewhere.