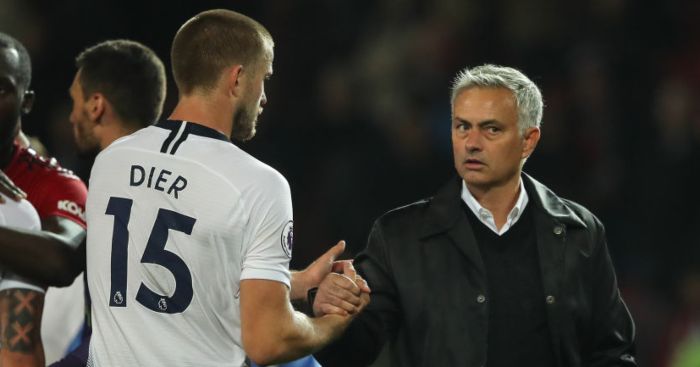 We did this back in May 2016 when Jose Mourinho was appointed back at Manchester United. Decide for yourself how we got on…

‘I found out that United have made an approach and the player is being destabilised. His people have been putting pressure on him, although United are not promising anything.

‘Mourinho and I had finished our interviews at Old Trafford and the players were doing their warm-down on the pitch. When Jose was done with the press, he stood by the entrance to the tunnel and regarded the returning players.

‘He greeted Moussa Sissoko and hugged Dier. They passed by me en route to the dressing rooms, laughing, speaking in Portuguese. Maybe it is a common Mourinho tactic, but he put Eric in a compromising position. You cannot do that after a defeat.’

For Mauricio Pochettino, it was sacrilege; an unnecessary distraction and an avoidable situation. For Eric Dier, it was a basic show of respect and friendliness. But for Mourinho, there always seems to be an ulterior motive. He knew waiting to embrace a known transfer target in plain view – particularly after a 1-0 victory – would only stoke the fires of speculation.

Mourinho himself later denied ever wanting Dier at Manchester United, while the player insisted his head was never turned. But the two do seem to share a natural rapport. Their upbringings in Portugal and their natural pragmatism make this a logical combination.

With Dier ostracised in recent months by the previous regime, the new general might have already found his on-pitch lieutenant.

Toby Alderweireld
Mourinho has never coached any player in the current Tottenham side, but he has most certainly courted a few in his past managerial lives. Alderweireld was one that got away on more than one occasion.

Ed Woodward blocked a move for the Belgian last summer on the grounds that he was too expensive for his age. Mourinho will revel in the opportunity of proving him and his former club wrong by restoring Alderweireld to his previous glories.

The 30-year-old was one of the Premier League’s best centre-halves a matter of seasons ago, but his standard and quality has inevitably dipped along with that of his club. There has been uncertainty surrounding the identity of his defensive partner, concern over his contract and a natural amount of regression.

Mourinho, for all his foibles, at least has the capacity to create an environment conducive to defensive success based on stability and consistency. The two highest appearance makers throughout his entire coaching career are John Terry (266 games) and Ricardo Carvalho (256), for crying out loud. Alderweireld certainly has the attributes to match them.

Tanguy Ndombele
If there is one thing Mourinho loves, it’s a French central midfielder whose role cannot be neatly categorised as either defensive or attacking. So Ndombele will surely fit right in.

“I have heard it all,” he said in the summer. “I am here to make my own path. Paul has made his own in England. I am Tanguy: not the new Essien; not the new Pogba.”

Perhaps Ndombele will soften that stance for his new “white daddy”, if only to ensure someone actually turns up to his next birthday party. But Essien is proof that Mourinho can embrace a more dynamic, skilled central midfielder as opposed to the functional, practical ones he has a reputation for favouring. In that Tottenham midfield, he and Giovani Lo Celso really do stand out as supremely gifted players still young enough to be moulded.

Lamela was Pochettino’s Tottenham: a talented, tireless athlete with a South American flavour and elbows as sharp as his mind. He would just as happily floor you with a stepover as he would a snide trip. And while his injury issues will not instantly endear him to the new manager, his is precisely the sort of attitude Mourinho needs to harness.

The predictable plot would be for Lamela to suffer further physical problems, Mourinho to question his mentality and the two to clash. If they can avoid that first obstacle, this really could be a prosperous relationship.

Ben Davies
Ashley Young was one of his regular starting full-backs for two seasons, and de-facto captain by the time he left Manchester United. Ben Davies will seem like Roberto sodding Carlos.