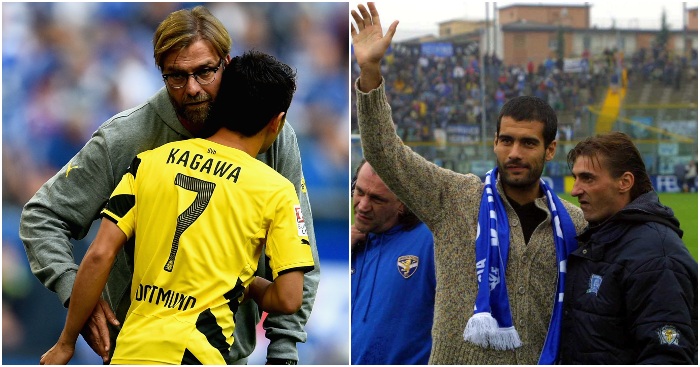 Andrea Pirlo to NYCFC
Even Juventus, the grand Old Lady of Italian football, briefly lost its sh*t over the prospect of the hipster God moving into a converted warehouse in Williamsburg to become the King of New York.

‘Pirlo is silent charisma, the steady hand in the middle of the park, the dummy that undoes the opposition defence,’ read Juve’s statement confirming his exit. ‘He’s that unexpected ball that splits the game wide open, the lofted pass that brings a team to its knees.

‘It has been an honour and a privilege to share these four fantastic seasons with Andrea, and all associated with Juventus wish him the very best for the future. Thanks for everything, Maestro, and good luck.’

Just saw Mr. Andrea Pirlo running along the westside highway here in NYC. His jog is as elegant in person as it is on TV. As was his hair.

It mattered little that newly-formed NYCFC weren’t much good; the prospect of Pirlo strutting around a shoehorned pitch at Yankee Stadium, spraying long passes to Mix Diskerud was always more about style than substance, initially at least. Patrick Vieira tried to combine the two when he took over as coach at the end of the Pirlo’s first season and though Man City’s baby sibling made the play-offs in the following two campaigns, Pirlo could carry NYCFC no further than the Eastern Conference semi-finals on both occasions.

Beautiful dinner with a great view !!!

Pep Guardiola to Brescia
The most hipster move ever? It must be Guardiola moving to mid-table Brescia to replace a teenage Pirlo and play alongside Bobby Baggio.

After more than a decade in the first team, Guardiola chose to leave Barcelona in 2001. The destination? He didn’t need one. The then 30-year-old fancied a half-season sabbatical before joining a new side in time to prove himself worthy again of a place in the Spain World Cup squad. But Jose Antonio Camacho felt that plan would leave Guardiola undercooked for Japan and South Korea. So the golf clubs had to go away and Pep began examining his options.

None of Barca’s domestic rivals bothered to waste their time with an approach, but Roma were one of a dozen or so sides to register an interest. Guardiola concluded that he would not be certain of a place in Fabio Capello’s midfield – but that would not be a problem at mid-table Brescia.

Pep’s plan to break back into Spain’s World Cup squad was foiled by poor form and a doping ban, even though he was later cleared on those charges. But Brescia made a lasting impact on Guardiola. “In Brescia, I feel like I’m at home,” he said, despite splitting his three-season stay in Italy with a year at Roma. After leaving the country, Guardiola received offers from Man Utd, Man City and Chelsea, but chose instead to take the more scenic route into retirement by spending a couple of seasons in Qatar before closing his career with six months at Dorados de Sinaloa in Mexico.

Oof. Stumbled upon this one today.

Shinji Kagawa back to Borussia Dortmund
Jurgen Klopp falls in love easily, that much we know for sure. The Liverpool boss is besotted with his current club, just as he was with his previous two.

There is no question that Klopp was the pull for many supporters who latched on to his previous employer Borussia Dortmund. The coach helped transform the club from being on the verge of going out of business to Bundesliga champions, competing and beating the likes of Bayern Munich and Real Madrid despite having a half and a third of their budgets.

That left Dortmund susceptible to having their best players picked off by clubs with bigger budgets and less warmth. In 2012, it was Kagawa’s turn to go.

It didn’t go very well for the Japan star at Manchester United. Actually, he was crap. Not that it was Kagawa’s fault, if you listen to those who refused to change their view that he was destined to be a huge success in the Premier League having thrived at Dortmund, despite the glaring evidence before them.  Even Klopp pinned the blame on Sir Alex Ferguson: “Shinji Kagawa is one of the best players in the world and he now plays 20 minutes at Manchester United – on the left wing! My heart breaks. Really, I have tears in my eyes. Central midfield is Shinji’s best role. He’s an offensive midfielder with one of the best noses for goal I ever saw… We cried for 20 minutes, in each others’ arms, when he left.”

When the chance came to #freeShinji and release him to return home to his natural habitat, it was an opportunity too good for Klopp to turn down. The assumption was Kagawa would return ‘home’ and, powered by hugs, once again rip up the Bundesliga while football Twitter could revel in the knowledge that once again, it had proved itself more knowledgeable than big bad Fergie.

Much of his first season back at Dortmund was spent in a relegation fight and it ended with Klopp stepping down. The following season was more productive for Kagawa but he soon drifted again, before being squeezed out of the club. But to some, he remains the talent most wasted by Manchester United.

Michu to Real Oviedo
While Dortmund were winning titles and getting to Champions League finals, subsequently becoming too mainstream for the refined tastes of the hipsterati, Real Oviedo were going under. The Spanish third-tier club where Juan Mata, Santi Cazorla, Adrian and Michu began their careers – and Stan Collymore ended his – were in dire financial straits, pleading with supporters to join their former players (the Spanish ones, at least) in purchasing shares in the club.

The club that gave the Premier League Cazorla, Michu and Mata is under threat of going out of business. PLEASE buy shares. #sosrealoviedo

Writer and good egg Sid Lowe lent his considerable Twitter weight to the campaign and within a day, 300 foreign supporters had waded in. Within no time, fans from more than 60 countries had helped to secure the club’s present and future, alongside a not-insignificant investment of more than €2million from Mexican billionaire Carlos Slim.

Oviedo became the obvious club for lost hipster souls and #sosrealoviedo was replaced by #proudofyou, a motto to link the club’s long-standing supporters with their new-found international friends who “were able to understand that Real Oviedo is a distinct club, with a tragic history and, above all, a unique soul that was worth their love”.

With their finances secure and so too promotion to the second tier for the first time in 12 seasons, Oviedo found themselves in a position to bring home Michu. The 30-year-old striker had not long since torn up the Premier League with Swansea and sampled Serie A with Napoli. But he took a stab at returning to the professional game having joined Spanish amateurs Union Popular Langreo upon being released by Swansea while being plagued by an ankle injury. His second debut for Oviedo came 686 days after his last professional appearance for Napoli and, obviously, he scored twice. Michu managed a full season with Oviedo before hanging up his boots. He recently made another return to the club as their new technical secretary.

Ryo Miyaichi to St Pauli
Everyone with no affiliation to SV Hamburg supports St Pauli. That’s just fact. The team, yo-yoing between the top and second tiers in Bundesliga, isn’t much actual use but St Pauli’s appeal stretches way beyond what happens on the pitch, into its community and their steadfast commitment to the underprivileged and under-represented.

In 2015, that charity extended to underachieving Arsenal youth products. Miyaichi, once dubbed ‘Ryodinho’ by the Dutch press after a successful loan spell at Feyenoord, had stalled at the Emirates following further spells at Wigan, Bolton and Twente. After seven senior appearances for the Gunners, St Pauli offered refuge.

Football’s punkest club signing a Japanese attacker once likened to Ronaldinho: the move ticked all football’s hipster boxes with a quill. But knee injuries hampered Miyaichi from fulfilling the potential St Pauli knew he possessed. As you might expect, the club stood by the forward, offering contract extensions through a couple of rehabs and he remains at the Millerntor Stadion, perhaps unlikely to achieve what was once expected of him, but at least he is fit and ready to help St Pauli have another crack at Bundesliga promotion.