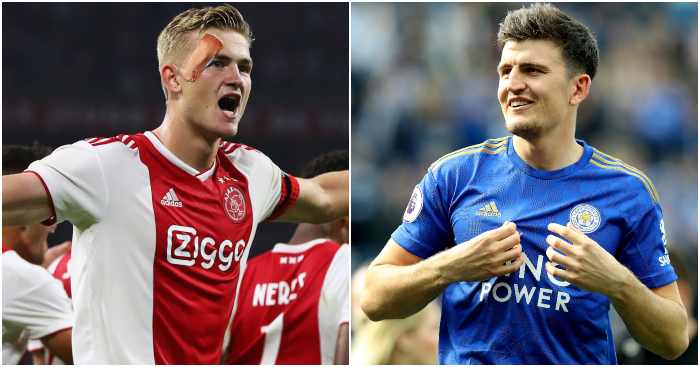 Matthijs De Ligt to Manchester United
It seems that De Ligt has his pick of clubs this summer, with Barcelona, PSG, Juventus, Manchester City and Liverpool all sniffing around the 19-year-old. But why would the Ajax defender want to join any of those title winners where major honours are almost guaranteed when he could take on the absolute mess at Manchester United instead?

For most players presented with those options, United wouldn’t be in with a sniff. But De Ligt is different to most players and according to some reports, the Red Devils could be down to the final two with Barcelona. Of course, it could all be a massive ruse to get a few more euros out of Barca, especially since the deal appeared as good as done prior to the end of the season. But what if it’s not?

United would almost certainly be the biggest payers among De Ligt’s suitors, but Ole Gunnar Solskjaer can hand him far greater responsibility and prominence too. Everything that’s been written and said about the 19-year-old suggests the challenge is as important as the salary he would earn at his next club, and nowhere would that be greater than Old Trafford.

De Ligt could be United’s next captain and, if the hype is justified – which it almost certainly is – the face of the Red Devils’ revival. If he wishes, he could do five years at Old Trafford and still move to Barcelona or Real Madrid before his peak. Shattering the world record fee for a Dutch defender certainly worked for Liverpool. If United have any leverage left, they absolutely should follow suit.

What a season for Matthijs de Ligt! 👏👏👏

Gareth Bale to Tottenham
After being shunned by Real Madrid supporters and Zinedine Zidane despite achieving almost everything at the Bernabeu, Bale needs to feel the love again. So disillusioned has the Welshman become, apparently he would be willing to lounge around on his huge contract at Real and fill his time playing golf, but that would be a tragic waste. Mauricio Pochettino needs to bring Bale home.

Given they have a stadium to pay for, Spurs have little hope of being able to afford a transfer fee of around £60million in addition to his massive salary. But few clubs would be any more willing to fork out and since Real want shot of the 29-year-old, with the prospect of him sitting on the final three years of his deal the worst of all outcomes, Daniel Levy can afford to sit tight.

A loan move seems the most likely compromise for all parties with a stake in Bale’s immediate future, and though Ed Woodward will inevitably panic at some point this summer and try to sign Bale for United, a return to Spurs appears the attractive option.

Bale would be returning to a different Spurs than the one he left, one with European kudos if not yet the pedigree. The club has been transformed in his absence and the prospect of helping to take Spurs on another step during their first season at their new home must surely appeal more than the Madrid golf courses?

Of course, signing Bale would be a lurch from Spurs’ recent approach. Signing anyone would represent a shift, but signing no one is not an option if Spurs want to keep their manager. The only players aged over 26 to have joined Spurs since 2016 are Fernando Llorente and Moussa Sissoko. While Pochettino will add more youth, some experience and a winning pedigree would be a wonderful supplement. But it seems more likely that the new face of Spurs’ left flank will be another teenager…

Ryan Sessegnon to Liverpool
That’s what Liverpool supposedly believe about Sessegnon. Reports suggest the Reds reckon the Fulham teenager is bound for Tottenham, but that should not deter them from attempting to piss all over Spurs’ chips once again.

Sessegnon is up for grabs as he approaches the final year of his contract at Craven Cottage. Fulham cannot afford to let the England Under-21 star leave for next to nothing next year so they will sell for around £30million this summer.

The 19-year-old would tick a lot of boxes for Liverpool. Jurgen Klopp doesn’t need much for his first XI but there remain a few holes in his squad which Sessegnon could fill. With Alberto Moreno and Daniel Sturridge off while doubts surround Xherdan Shaqiri’s future, Sessegnon could fill in all the way down Liverpool’s left.

He may not be guaranteed a starting place at Anfield – and nor should anyone not named Virgil van Dijk – but Sessegnon would get plenty of game time at a club very much on the rise and one he supported as a boy. He would be an ideal project for Klopp and his contractual status coupled with his versatility means he offers plenty of value to those who pay the bills at Anfield.

Callum Hudson-Odoi to Bayern Munich
This one seems a lot less likely than it did in January. When Bayern were last chasing the England winger, Chelsea weren’t banned from signing a replacement, Hudson-Odoi wasn’t injured and Maurizio Sarri’s position looked secure. Now they are, he is, and it isn’t.

But none of that is said to have dampened Bayern’s enthusiasm. The Bundesliga champions need at least one winger this summer to cover for the departures of Franck Ribery and Arjen Robben, with Uli Hoeness admitting towards the end of the season that the club were “still thinking” about Hudson-Odoi despite his injury.

It hasn't quite been his half, but if Bayern are allowed to sign Hudson-Odoi for £30m you'll be able to hear Rummenigge and Hoeness laughing from here.

Bayern are also said to be keen on Leroy Sane but Manchester City are in a far stronger position than Chelsea over the fate of their young winger. City have placed an “insane” price tag on the Germany international star which could intensify Bayern’s interest in Hudson-Odoi.

An injury did not deter Bayern from making Lucas Hernandez the most expensive Bundesliga signing ever earlier this summer and though the defender will be fit before Hudson-Odoi, it highlights that Bayern are taking a longer-term approach to their recruitment this summer.

To watch from afar as Hudson-Odoi and Jadon Sancho use the Bundesliga as the battleground for England places would be a treat for all of us. Despite moving for bigger money to a bigger club, Hudson-Odoi would be playing catch-up. There would be no better time and few better places to justify the hype.

Harry Maguire to Manchester City
We’re somewhat conflicted on this one. On one hand, it would be fascinating to see what Brendan Rodgers could do with Leicester if he keeps their squad intact and reinforces it slightly this summer. But on the other, the prospect of watching Pep Guardiola mould Maguire into the Yorkshire Beckenbauer is too good to miss.

With Vincent Kompany leaving and speculation that Nicolas Otamendi might look for a game elsewhere, Guardiola is sure to be in the market for a centre-back this summer. At the highest level, there aren’t many all-rounders as good as Maguire with potential for further improvement.

The problem for Maguire’s suitors is Leicester know that and they do not have to sell. Despite being in the habit of selling their best player every summer over recent years, the Foxes would only do so on this occasion if City were to put silly money on the table.

But Maguire is worth it. If Leicester want £90million, that seems fair. Every defender is now priced on the Van Dijk scale and though none is currently as good as Liverpool’s £75million man, that doesn’t mean Maguire should fetch less. United bottled it when they were quoted the same figure for Maguire last summer but a solid season for Leicester has made a mockery of Ed Woodward’s concerns over paying top dollar just for a few good performances at the World Cup. Another smooth move, Ed.

Aymeric Laporte might not get the same tingle we do when thinking about England centre-backs Maguire and John Stones being schooled by Guardiola, but there is room for all three at City and each one would develop even further with that kind of competition, which is something Maguire needs to achieve his potential.