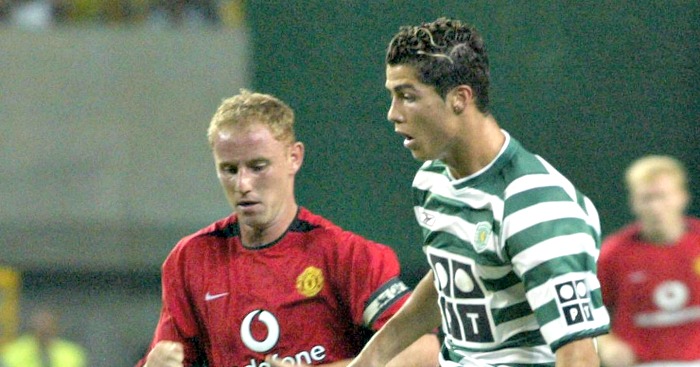 On Monday, the football world was given a tantalising taste of what could have been. Giovanni Branchini, agent of legendary Brazilian striker Ronaldo, revealed that the forward almost left Barcelona to join Rangers in 1997. Then just 20, Ronaldo was one year removed from being named World Player of the Year, and would lead his national team to a World Cup final a year later. He would eventually opt to join Inter Milan, and Marco Negri finished top scorer in the Scottish Premier League for the 1997/97 season. What could have been. Mind you, Branchini added that Rangers said the forward was only for Champions League games, and did not have to play league fixtures. Which is quite something.

In lieu of Ronaldo’s move to Ibrox which so nearly happened but was never quite pushed through, here are five more transfers which never quite happened.

Ronaldinho to St Mirren
We start with an iconic Brazilian almost joining a Scottish side. But as bizarre as Ronaldo featuring for Rangers in 1997 would have been, it would have looked as predictable as Sam Allardyce handing Mark Noble his first international cap had Ronaldinho joined newly-promoted St Mirren in 2001. Were it not for that famed ‘red tape’, the buck-toothed one would have prepared for his imminent big move and World Cup victory in style.

Looking to leave Gremio in 2001, Ronaldinho had attracted interest from Arsenal, because obviously. Work-permit issues would scupper that move, but he soon found solace at Paris Saint-Germain. Only the Brazilian wished to acclimatise himself to European football beforehand, and where better than in front of 8,000 at Love Street? Ronaldinho was more than happy to move to Scotland, but his involvement in a fake passport scandal in his native Brazil ended all hopes of a move. The midfielder would win the World Cup the next year; his brief Scottish fling claimed a fifth consecutive Renfrewshire Cup. Who is the real loser there?

Johan Cruyff to Dumbarton/Leicester
What is it with Scottish clubs getting ideas above their station? In 1980, reports broke that Dumbarton, who had finished mid-table in Scotland’s second tier, had approached three-time Ballon d’Or winner and ‘Total Football’ aficionado Johan Cruyff with regards to a transfer. The Dutchman was 33 at the time, but, y’know, Scottish second tier.

Then-Dumbarton manager Sean Fallon later admitted the speculation emanated from a public-relations exercise at first, saying: “I knew it was always unlikely we would get Cruyff, but the way I saw it we couldn’t lose. At worst, it got Dumbarton on the back pages for a few days and boosted the club’s image and profile, which was very low at that time. At best, if we were really lucky, we might get a magnificent player.”

And they almost did. “Was I tempted? Yes, of course,” the late, great Cruyff said in his later years. “Playing in England, or Britain, was something I had always wanted to do. But I thought I was too old at that stage to go to Scotland, where you know the weather will be difficult. When you’re old your muscles get stiff, and moving to a cold country is asking for problems.”

Cruyff would instead join the Washington Diplomats, but a year later, another opportunity to move to Britain emerged. After weeks of speculation, The Sun finally confirmed the worst-kept secret in the Midlands on February 25, 1981. ‘Johan Cruyff is today set for a sensational move to First Division strugglers Leicester City,’ they reported. ‘The Dutch Master has lined up a deal worth £4,000-a-game for 11 matches and, if everything works out, he will make his debut against reigning European champions Nottingham Forest on Saturday.’ “Johan and I have already agreed terms,” manager Jock Wallace would add. “He has one or two problems to sort out, but I am very hopeful he will join us on Thursday.”

The next day, hearts were broken. Spanish side Levante confirmed they had struck a deal to sign the ageing legend. The icon had rejected a move to these shores for the second time, and who could blame him?

Diego Maradona to Sheffield United
If only Sheffield United could have found an extra £40,000 down the back of the sofa. On a scouting trip in Argentina in 1978, then-Blades manager Harry Haslam witnessed the impressive performances of a 17-year-old future star. The diminutive forward was on the books at Argentinos Juniors, who were happy to part ways with one of their prized talents – so long as the mid-table Second Division club stumped up £200,000.

Whereas a £200,000 signing in the modern day would perhaps sign you a credible Football League player, it would have signed a future great of the game in 1978. But the key word was ‘future’ – United could have no guarantees Maradona would make it. Their board refused to meet Argentinos’ demands, and they sought different targets. They eventually landed on Alejandro Sabella, and paid £160,000 for his services. The future Argentina manager was a success in Yorkshire but, within a decade of United’s snub, Maradona was the most-expensive footballer ever, as well as a world champion and absolute icon.

“I was at West Ham and Frank Lampard Snr and I were approached by these two villains who said they were doing some business in the Ukraine, and we were so scared of them we agreed to have a look at a couple of these kids.

“One of them we played against Barnet Reserves and he scored the winner but to be honest he didn’t look like anything special at all. They said they wanted a million quid for him, and Frank said it was too much – well I’m blaming Frank – and we let him go. His name was Andriy Shevchenko!”

As ever with Harry Redknapp, it is difficult to separate the fantasy from the reality. Did he really refer to two Ukrainian men as “villains”? Was he really so fearful that he agreed to acquiesce to their demands and watch a couple of players in action? And, most pertinently, did he really turn down the chance to sign a young Andriy Shevchenko for just £1m. Then at Dynamo Kiev, Shevchenko was 18 and on the brink of the first team. He would make a name for himself alongside Serhiy Rebrov, and the future European champion would eventually outgrow his strike partner.

For what it’s worth, Shevchenko has denied the story since, claiming that he “never auditioned for any other team”. It is perfectly possible that he was simply unaware he was being scouted by a Premier League manager, of course. It is also possible that the man who would once be fazed by Jerzy Dudek pretending to have legs made of jelly was merely protecting his ego.

Cristiano Ronaldo to everyone
Although he was always destined for the top of the game, the path taken by Cristiano Ronaldo to reach that point could well have taken different stops. It all started at Sporting Lisbon, but he so nearly missed his detour to Old Trafford.

“Liverpool are one of the best clubs in England and it would be a dream for any player to represent a club of such traditions,” said a greasy-haired, spotty Portuguese teenager in 2003. The Reds had been linked with a move for the Sporting Lisbon winger, and he was more than happy to stoke the fire. “I will have to hope they make an offer that is good for both Sporting and myself,” he added. Liverpool led the race for much of the summer, but were eventually pipped by United.

As were Arsenal. “He was very close to coming here,” said Arsene Wenger, in a quote that could be regarding any player to have ever kicked a ball. “He has a number nine shirt with Ronaldo on the back from Arsenal Football Club.” The 31-year-old took his rightful place in our ‘Arsene Wenger almost signed XI‘ earlier this year.

To complete the trio of clubs to miss out on Ronaldo’s talents, we head to Italy. Juventus were one step ahead of everyone, pursuing the winger throughout 2002. According to former club scout turned journalist Gianluca Di Marzio: “I made a report on Cristiano and went to watch him play for Sporting against Belenenses. I spoke to the kid and to his mother and the following day both of them were in Turin, where he underwent a medical. But in the end it didn’t come together. As part of the deal, Marcelo Salas was supposed to go to Sporting but he refused to go and the transfer broke down.”

After failed moves and admiring glances from afar, Ronaldo would finally seal his departure from Lisbon in 2003. Manchester United’s appointment of Carlos Queiroz a year earlier proved crucial, the assistant manager having worked with the player at Sporting. Beating Arsenal and Liverpool to his signature was simply the icing on what would prove to be the sweetest of cakes for Alex Ferguson and co.