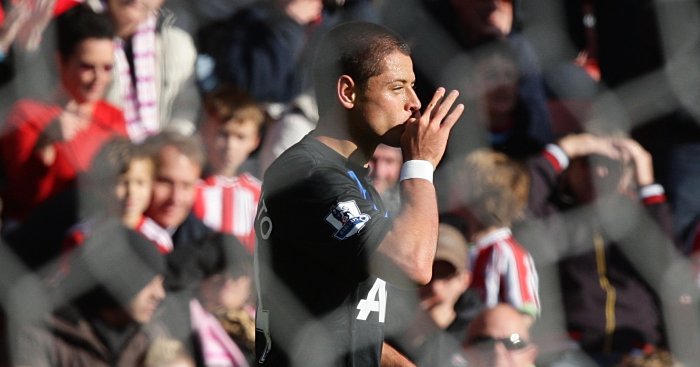 Tanguy Ndombele scored a quite silly goal against Sheffield United on Sunday. It was as excellent as it was distinctive, yet also not even entirely unusual in the ridiculous history of Tottenham. Premier League stalwart Robbie Keane managed it against Portsmouth in February 2005 without falling over.

But it did lead us to thinking: what is the most unique goal ever scored in the Premier League? What strike has no real resemblance to another? What is the only one of its kind over the near-30-year history of the competition?

Some dishonourable mentions first, of goals that belong in similar sub-sets with at least one other. Dennis Bergkamp’s iconic hit against Newcastle is the poor man’s version of Ricardo Fuller against Aston Villa. Divock Origi against Everton was little more than Youl Mawene against Southampton, just with Jordan Pickford and Paul Jones swapping roles. Olivier Giroud and Henrikh Mkhitaryan cancel each other out with scorpion kicks. Tomas Brolin, Tyrone Mings and Marcos Alonso all cover the ‘ball kicked against them in hilarious circumstances that should be presented by Nick Hancock’ genre. Cesc Fabregas at Sunderland is one of the better versions of a player getting in the way of a clearance that loops over the keeper but there have been plenty more. Half-way line efforts are fun but common enough. And loads of goalkeepers have scored.

With that admin out of the way, here are five Premier League goals with absolutely no comparison. Until you tell us otherwise.

Jason Cundy (Tottenham v Ipswich, August 1992)
Those who believe Manchester United inflicted upon Craig Forrest the two most embarrassing experiences of his entire career ought to look past that 9-0 shellacking of Ipswich in March 1995 and the 7-1 thrashing of West Ham in April 2000. The reality is that the first month of the nascent Premier League brought arguably the nadir of the Canadian’s professional escapades.

Not that it was all bad: Ipswich actually embarked on the longest unbeaten start of any side to the 1992/93 season. They secured early draws at Old Trafford and at home to Liverpool and Aston Villa – although their only victories in August and September both came against Wimbledon.

It was at Portman Road against Tottenham that Forrest in particular was chopped down to size. The keeper was stationed on the edge of his six-yard box as an Ipswich throw-in was directed towards Chris Kiwomya near the halfway line. His flick behind the back to Jason Dozzell seemed safe enough but a lurking Jason Cundy added characteristic danger to the situation. The midfielder launched into a sort of tackle-clearance that soared through the air, the Sky Sports Super Sunday cameras barely able to keep up as it flew over Forrest, whose jersey billowed in the winds that had just betrayed him.

“That’s a strange one,” said Martin Tyler. “A complete fluke, you might say.” Just a bit.

Javier Hernandez (Manchester United v Stoke, October 2010)
When Manchester United visited Stoke in the early stages of the 2010/11 season, they did so under a bit of a cloud that, for once, could not be attributed to the fabled difficult weather surrounding the Britannia Stadium.

They had not won away in the Premier League in their first four attempts, stumbling at Fulham, Everton, Bolton and Sunderland to give Chelsea a sizeable head start. Wayne Rooney had only recently committed his future to the club after agitating for a move and was unavailable through injury. Their title defence, in pursuit of a 19th championship to finally surpass Liverpool, was in jeopardy.

Javier Hernandez would be named the club’s Player of the Year in his first season and displays such as those against Stoke showed why. He netted the late winner after a sensational Tuncay Sanli equaliser, but only after the Mexican himself ingeniously opened the scoring.

Nani took a short free-kick that Patrice Evra returned to the Portuguese, whose cross reached Nemanja Vidic at the back post. Marc Wilson was tasked with the simple job of marking a man roughly six inches shorter but Hernandez proved that size does no matter by leaping, twisting his body in mid-air and heading the ball backwards past Thomas Sorensen. To do it at all was silly. To do it against Stoke was sacrilegious brilliance.

As pointed out by @stuholden: Chicharito header with the back of his head vs Stoke. Nearly had a similar one tonight. pic.twitter.com/A9h6v9yHjZ

Adama Diomande (Hull v Leicester, August 2016)
Never before had a Premier League champion lost the opening game of their subsequent title defence. But then Leicester made a habit of ignoring the script in 2015/16 so perhaps everyone should have expected them to make a mess of the post-credits scene, too.

Hull were sacrificial Tigers to the slaughter for the Foxes in August 2016. Steve Bruce had left the promoted club in July, with Mike Phelan expected to make chicken salad from scraps and bones. Their pre-season plight was such that Curtis Davies forced himself to laugh, lest the centre-half be reduced to tears.

Few would have expected anyone in that photograph to become a world, European and Premier League champion within three years. Fewer still might have deemed one of those players capable of scoring an overhead kick ostensibly assisted by an overhead kick.

Adama Diomande was one of the chosen nine that comprised Hull’s summer squad and it was he who started their campaign in surprisingly bright circumstances against Leicester. In the midst of first-half stoppage-time, a Robert Snodgrass corner was nodded on by Davies and saved by Kasper Schmeichel, only for Diomande and Abel Hernandez to unleash enough bicycles to make Katie Melua jealous.

Both forwards raced off in opposite directions as most teammates congregated around Hernandez, the Sky Sports commentary team similarly crediting him with the goal. It was only on replay that the realisation dawned: Hernandez hit the ball first with his toe before it came off Diomande’s studs and into the net via the crossbar.

The WhoScored description of the goal says it all:

Dion Dublin (Coventry v Newcastle, November 1997)
There is a shout for Nani’s goal against Tottenham in October 2010 but in the pantheon of cheeky bastardry there is something ultimately far more charming and unique about Dion Dublin’s effort for Coventry in a draw with Newcastle in November 1997.

Shay Given had done excellently to collect a deep cross in the opening stages of the game at Highfield Road. As he rose to his feet he sort of presented the ball to Darren Peacock as if to ask whether he wanted it to start a quick counter-attack. The defender jogged away in seemingly rejected the offer and so Given bounced the ball once and rolled it out, unaware that Dublin had been waiting and watching behind him after failing to connect with the earlier cross.

The striker re-entered the field of play and tapped the ball into the empty net. Given, as the joke went, was the only Irishman not to know where Dublin was at that point, later explaining that he only let go of the ball to ensure he did not break the six-second rule that had only been introduced that summer in an attempt to stop goalkeepers time-wasting. Never again has a goalkeeper relinquished their grip without at least a cursory glance behind them beforehand.

Target man, centre-half, daytime telly host, musician, and a man who once made himself invisible… at least to Shay Given.

Darren Bent (Sunderland v Liverpool, October 2009)
“If anyone knew that rule, that it should have been a drop ball, then you are one saddo,” was perhaps the most Steve Bruce of all Steve Bruce quotes in the aftermath of Sunderland’s bizarre victory over Liverpool in October 2009. The Black Cats manager would undeniably have shared the same opinion had Steven Gerrard piledriven an effort in off a stray copy of Sweeper! that a fan had thrown onto the Stadium of Light pitch.

There was no precedent for referee Mike Jones to follow when Darren Bent’s strike rebounded off a beach ball and past a baffled Pepe Reina in the fifth minute. As an “outside agent” had entered the field of play the game should have been stopped but by the time Andy Reid’s cross had deflected its way to Bent, everyone was too busy trying to work out whether it hit Glen Johnson or if it was a balloon rather than whether it should have stood.

It will never be repeated purely because it happened in the first place; the incident remains so memorable that it ensured a generation of put-upon Liverpool supporters, delighted Sunderland fans, schadenfreude enthusiasts and budding officials instinctively know the rule that would now rule it out instantly, much to the chagrin of law unabiding citizen Steve Bruce and beach ball owner Callum Campbell.