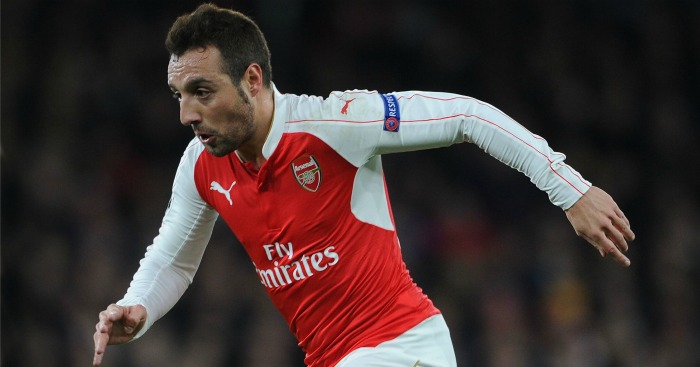 The Premier League is increasingly becoming a young man’s game. We pick five outfield players aged 30 and over who are still vital to their club…

Santi Cazorla
The Arsenal midfielder narrowly wins the battle against club team-mate Laurent Koscielny, mainly due to the Spaniard’s durability. While Koscielny has featured in 18 of Arsenal’s 23 games this season, and 39 of 56 last campaign, Cazorla has missed just six games since the start of last season.

The 30-year-old was also something of an Arsenal miracle up until the end of last month, having been sidelined for just seven games through injury since joining the club in 2012. That record will unfortunately be extended for the foreseeable future.

Arsenal were already suffering due to Francis Coquelin’s injury, but Cazorla’s is arguably more detrimental. Aaron Ramsey is a fine central midfielder, but he is not a suitable long-term replacement. Will the Gunners sign anyone in January?

Simon Francis
If Bournemouth are to stay up this season, Glenn Murray may steal the plaudits as the goalscorer, or Matt Ritchie as the spark, but Simon Francis would be the true Cherry on top.

Francis has not missed a single minute for Bournemouth in the Premier League this season, and played two of their three Capital One Cup ties. More impressive is that none of his team-mates have created more chances, while he has made 20 more tackles than the next Bournemouth player. Only four can beat his mark of 49 in the whole of the league.

The 30-year-old has also had more touches of the ball than every player in the league aside from Cazorla, and his adaptability has been key for newly-promoted Bournemouth. Francis has started 12 games in his preferred position at right-back, but he has also played as a centre-half. While Eddie Howe’s side have conceded a league-high 30 goals in 15 games, they have conceded just three in as many games with Francis in the middle.

Ashley Williams
Swansea have struggled to emulate the achievements of their highest-ever league finish of eighth last season, and while the ever-reliable Ashley Williams has been somewhat culpable, the captain’s importance to the cause cannot be overstated. The Welsh side’s back-up options in central defence behind Williams and Federico Fernandez are Jordi Amat and Kyle Bartley; the pair have started just 31 Premier League games between them since 2013.

For evidence of just how vital Williams is to Swansea, consider the amount of minutes he has missed in the league since joining on a permanent deal in 2008. Of a possible 27,720 minutes, Williams has played 26,992, all the way from their first season in the Championship to their Premier League promotion. Williams, 31, has missed just 728 minutes – the equivalent of just eight games – of league action in eight years.

The Schweinsteiger effect has been clear to see. Some fans have identified the World Cup winner as the main problem for United, but he has helped the fourth-best defence of last season become the most stringent of this campaign.

Of Manchester United’s 24 games in all competitions so far, Schweinsteiger, along with Chris Smalling, is the only player to feature in all but one. Van Gaal may have expressed his dissatisfaction with Schweinsteiger’s performances, but the only game in which the midfielder has been afforded a rest was the 0-0 Capital One Cup draw with Middlesbrough.

Jose Fonte
Whether it was Maya Yoshida and Jos Hooiveld in 2012/13, Dejan Lovren in 2013/14, Toby Alderweireld in 2014/15, or Virgil van Dijk this season, Jose Fonte has been Southampton’s constant in an era of central defensive upheaval.

Since joining the club in 2010, Fonte has become a staple of a Southampton side that has risen through League One and the Championship, before establishing itself in the Premier League once more. The captain leads the way for club appearances in the current squad, nearly doubling the amount of Steven Davis – the only other player to play more than 100 games for Saints.

The 31-year-old is the club’s longest-serving player, and is their only ever-present player so far this season. The Portuguese still can’t make Maya Yoshida look competent, but he is no magician.