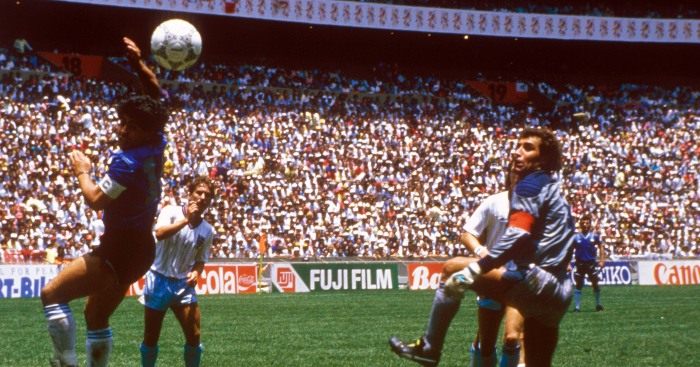 VAR would’ve stopped the Hand of God and England would definitely have won the World Cup. Also: has anyone ever been more offside than Carlos Tevez in 2010?

Diego Maradona v England – quarter-final, 1986
Just watch it, for f*ck’s sake. There is not a party involved in this tragicomedy who doesn’t have something to answer for.

How Maradona’s handball wasn’t spotted by Tunisian ref Ali Bin Nasser or Bulgarian linesman Bogdan Dochev, only they could know. But rather than getting their story straight, they simply resorted to the desperate act of blaming each other.

Then there is the England defence. Firstly, Steve Hodge’s ‘assist’: It appears to be a sliced clearance but he later admitted it was the most ambitious and ill-advised attempt at a back-pass that the World Cup has ever seen. Still, should Peter Shilton have got there first? The England keeper, giving up his 20cm height advantage over Maradona by apparently wearing lead-lined Puma Kings, barely left the floor while the little Argentina genius took flight. The England keeper took neither ball nor man, despite Maradona bracing for the impact of a gloved fist. How Shilton would like that opportunity again.

Had Maradona’s snide not succeeded, perhaps he might not have felt quite so untouchable that he felt it necessary to waltz through the entire England defence four minutes later to score one of the greatest goals the game has ever seen. Actually, of course he would. But maybe the England defence, probably still dazed by the injustice of the opener, would have been alert enough to recognise that Maradona required stopping, through fair means or foul. Then, Gary Lineker’s goal would have earned victory before Bobby Robson’s men inevitably steam-rollered over Belgium in the semis and West Germany in the final to end just the 20 years of hurt.

Giovanni Trapattoni’s men had fought back from losing the home leg 1-0 to level the aggregate score, with Robbie Keane’s goal in Paris giving Ireland the belief that they could complete a remarkable comeback. France were becoming more desperate, which manifested itself in Henry using his hand to control the ball before teeing up William Gallas for a tap-in.

“I’m 100 per cent right on this,” Swedish referee Martin Hansson told Kevin Kilbane when he protested at half-time of extra-time. Henry knew he wasn’t and the former Arsenal star recognised that he had some face-saving to do at full-time. Making a decent fist of feigning sorrow, he sheepishly sat down next to Richard Dunne and claimed it was merely instinct and not a calculated act of b*stardry. Presumably, the same went for his enthusiastic celebration.

Still, had they not reached the finals, we would not have all been witness to France’s quite wonderful implosion on the world stage in South Africa.

Andreas Brehme v Argentina – final, 1990
Italia ’90 was either the best or the worst finals ever depending on your age and viewpoint but what we can all agree on is that the final between West Germany and Argentina was an absolute sh*t show.

It was goalless approaching the final minutes, with Argentina down to 10 men after Pedro Monzon had been shown a straight red for a challenge that landed in the vicinity of Jurgen Klinsmann’s shin. Nobody wished for another 30 minutes of such turgid fare so perhaps Voller deserves some gratitude.

He certainly deserves credit because his dive was one of the finest of its genre. Receiving Stefan Reuter’s pass, Voller took a touch before feeling the presence of Roberto Sensini, who was daft enough to offer the German striker an outstretched leg. With perfect timing, Voller’s knees buckled, taking him to the turf.

Brehme dispatched the spot-kick, while Argentina opted to use the remaining few minutes to get another man sent off.

Fabio Grosso v Australia – round of 16, 2006
Italy were in the mire during their first knockout round meeting with Australia in Stuttgart. The Azzurri were down to 10 men after Marco Materazzi was sent off early in the second half and Marcello Lippi’s weary players had run out of ideas. So, Lucas Neill’s ill-judged sliding challenge was manna from heaven.

Grosso was delighted to accept Neill’s offering. After cutting inside the Socceroos defender, Grosso tumbled over the obstacle before him, earning his side an injury-time penalty which Francesco Totti duly dispatched.

Once enough time had passed, Grosso admitted that he had laid it on thick. “In this instance when Neill slid in, maybe I accentuated it a little bit,” he admitted. “However you must remember it was the last minute of an extremely difficult game and everyone was tired. It’s true that I felt the touch and didn’t have the strength to go forward.”

Invigorated by their scare, Italy got their sh*t together and went on to win World Cup, knocking out hosts Germany along the way.

Carlos Tevez v Mexico – round of 16, 2010
The offside rule says there must be two opponents between an attacker and the goal. For Argentina’s opener against Mexico, there were none, and Tevez knew it.

“I know I was offside, I know it was selfish,” Tevez admitted after the game. “But as long as they say it was a goal, it’s OK for me and the team.”

Argentina boss Diego Maradona believed the officials’ error was karma for Mexico’s rough treatment towards Lionel Messi. “What happened to Messi was scandalous, he picked up the ball and they went straight for his legs.

“I understand the complaints from Aguirre, he is heated just like me. But I am worried more about if they seriously hurt Messi than if the linesman made a mistake.”

Twelve and a half years later, Mexico have the chance for revenge when they meet in Group C on November 26.

Read more: F365 in The Room Next Door to Gianni Infantino for that clusterf*** of a press conference