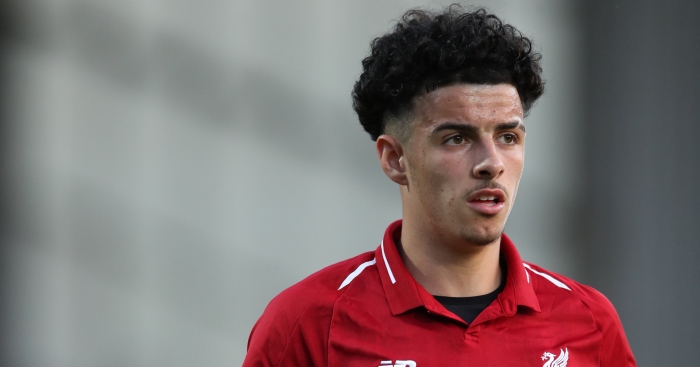 Tahith Chong (Manchester United)
Ryan Giggs, Paul Scholes, Phil Neville and Wes Brown were early winners of the Jimmy Murphy Young Player of the Year award at Manchester United; the latest young pretender is 18-year-old Dutchboy Tahith Chong. A shortage of first-team players available after the World Cup earned the winger a place on United’s US tour by default, and against Club America he got his 30-minute chance;  the Manchester Evening News say he was ‘fast, good with his feet – and a wicked cross led to Mata’s equaliser’.

Andreas Pereira and Tahith Chong impressed today. Would like to see Pereira a bit more forward though and Chong should at least get some carabao cup games this season. Big season for Pereira. Hope he shines.

Of course Jose Mourinho was on hand with his miserablist take: “Technically he is very good, tactically he understands the game and he understands his position, but by the physical point of view, but when the game gets into contact situations he is in trouble, he is fragile, he is still a kid. He is one of the good kids we have. It is not for today but for the tomorrow he is a good kid.”

Annoyingly, he then started against San Jose Earthquakes and looked fragile. Damn you, Jose.

Curtis Jones (Liverpool)
“He’s a great kid, he wants to work, he wants to learn, he’s a top, top talent,” said Steven Gerrard in September of a player who had scored two goals and made the other in a 3-1 win over Everton in the Under-18 Premier League. Gerrard openly said he was building his Under-18 team around a player who many insist is a carbon copy of the Liverpool legend himself; what is certainly true is that there is much excitement on Merseyside about Jones, who is still only 17 and has captained his country at youth level.

This summer he has stepped up again, featuring in all five of Liverpool’s pre-season games. But it was against Borussia Dortmund that Jones was really tested and emerged unscathed, looking at ease and at home in midfield alongside Fabinho and Adam Lallana. Jurgen Klopp says he has “a lot of body he can swap into muscle”. Don’t we all?

Callum Hudson-Odoi (Chelsea)
Chelsea’s kids have won the FA Youth Cup in five successive seasons and yet not a single player has graduated to become a first-team regular. That sorry streak could be ended by Callum Hudson-Odoi, winner of two FA Youth Cups and the Under-17 World Cup with England. Rumour has it that Hudson-Odoi is being offered a lucrative five-year contract to prevent him absconding for one of many European clubs casting admiring glances his way.

In the absence of Eden Hazard, he started against Perth Glory on Monday and was excellent, creating the only goal for Pedro and generally being a nuisance all game. It’s that kind of form that will keep him at Stamford Bridge this season to train with the first team instead of being shipped off to Vitesse Arnhem or Derby.

Callum Hudson-Odoi what an assist. pic.twitter.com/bXLdTa0Yf4

Eric Garcia (Manchester City)
At Barcelona they compared him to Gerard Pique, but Manchester City fans think they see something of Nicolas Otamendi in the Spanish centre-half who joined City last summer at the age of just 16 after coming through La Masia. He established himself in the Manchester City Under-18 side last season and played the full 90 minutes against Borussia Dortmund this week, catching the eye of Manchester City fans and manager alike.

What an unbelievable experience to have made my debut for @ManCity now it’s time to keep working hard💪⚽️🔵 pic.twitter.com/z9rm8Eb2Ny

“Eric Garcia is 17 or 18 and played like he is 24 or 25,” said Guardiola after watching Garcia ping cross-field balls and sniff out danger with a maturity far beyond their years. Remember the name (for when he joins Girona).

Nathan Holland (West Ham)
Ryan Giggs and Steve McManaman were the pretty stellar names dropped by West Ham academy manager Terry Westley last season when discussing Nathan Holland, who had arrived in east London from the Everton Academy. He also said he was better than other wingers like Nathan Redmond and Demarai Gray because he ran straight at defenders rather than stopping and changing direction.

Hammers fans have seen some of that vim in pre-season, with Holland the stand-out performer of all the youngsters drafted in by new boss Manuel Pellegrini. The Chilean is said to be so impressed that he will not send Holland out on loan this season.