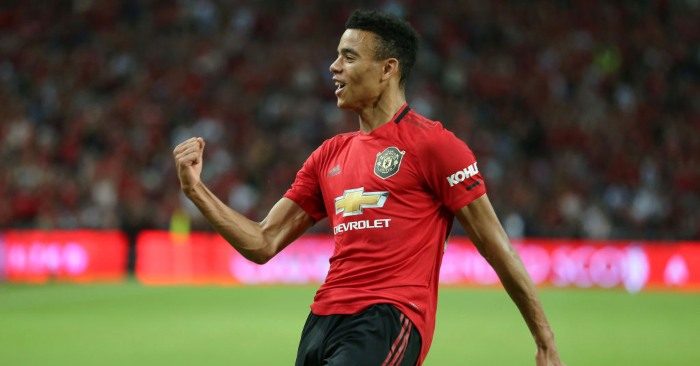 Rhian Brewster (Liverpool)
Some have got a little carried away…

“Rhian Brewster got the other with the greatest penalty any Liverpool player has ever taken. He knows he belongs, his aura is incredible. He looks like he has played 120 games for Liverpool not 120 minutes before August.”https://t.co/AmmyXjGGT6

…but you cannot argue with four pre-season goals to justify Jurgen Klopp’s decision not to pursue the signing of another striker this summer to replace the departed Daniel Sturridge. As James Nalton wrote last week, he is incredibly well-placed to be the new Roberto Firmino, being moulded on the job by Jurgen Klopp.

Eddie Nketiah (Arsenal)
“His progress is impressive – we want progress with every player; he has a very good attitude and he needs experience, minutes and confidence,” said Unai Emery after the striker scored his second and third goals in two games against Bayern Munich and Fiorentina this week. Now the club has to make a big decision: Send him on loan to the Championship (Bristol City were mentioned last week) or keep him at the club as back-up to Pierre-Emerick Aubameyang and Alexandre Lacazette after the exit of Danny Welbeck.

“I feel like I have been improving until being at a stage now when I am ready to play regularly,” said the man himself. “I am trying to show in pre-season that I have developed and I am ready to show what I can do. I am ready to start playing regularly. We’ll see what happens in the future but I am just enjoying the tour and in the future decisions will be made. After the tour, it’s something that I will look at with my family and speak to the manager and see what is best for me.”

Video of Nketiah taking the piss out of Sule pic.twitter.com/jCUTG91AI2

Mason Greenwood (Manchester United)
“Humble, hard worker… and a hell of a finisher. Well done, Mason!” was the message from Juan Mata after Mason Greenwood scored the only goal of the game as Manchester United beat Inter Milan 1-0. He had already struck in pre-season with the opening goal against Leeds, which confirmed what many youth team observers had been saying for the last two-three years: This kid is the most real of deals.

It has already sparked the most tiresome of debates, but how exciting could England’s future look with Brewster, Greenwood and Nketiah all potentially playing games for top-six sides?

Right, let’s settle this once and for all.
RT for Mason Greenwood.
Like for Rhian Brewster. pic.twitter.com/aeKu8mq4BD

Kyle Walker-Peters (Tottenham)
“Pre-season is the opportunity to show the gaffer what you can do and try and get yourself in his plans for the season. That’s my aim,” said right-back Kyle Walker-Peters, even before it was clear that Kieran Trippier was leaving the club and there would be an opportunity for a right-back – any right-back – to stake a claim for a first-team place. While Mauricio Pochettino’s plan might largely feature Juan Foyth, it should result in more minutes for Walker-Peters this season.

As one fan website wrote after Tottenham’s victory over Juventus: ‘A fantastic run out for the young man up against one of the world’s best in Ronaldo. Walker-Peters kept the ex-Madrid man pretty quiet, while also getting up and providing a potent outlet down the right-wing. Hope to see him a lot next season.’

Some were less effusive – saving their real praise for midfielder Oliver Skipp – but there is no doubt that Walker-Peters will play more than 374 Premier League minutes this season.

#thfc Walker-Peters has done some things well v Juve but that wasn’t great – gave the ball away carelessly and then couldn’t cut out the cross when defending 1v1. Auditions at right-back one of the main points of interest after Trippier’s exit.

Lewis Gibson (Everton)
“It’s unbelievable, it’s what dreams are made of, really. I’ve been waiting a while now – since I was little I’ve just always dreamed of this and obviously now it’s come and I’m just ready to take my opportunity,” said 18-year-old Lewis Gibson after being rewarded for an Under-23 double with a place in Everton’s pre-season plans. In fact, he has played more minutes for Everton in pre-season than any other player, and was particularly impressive in keeping a clean sheet against Monaco as part of a defence also including Seamus Coleman, Michael Keane and Lucas Digne (even if he gave away a penalty).

In the absence of Yerry Mina – and following the return to Chelsea of Kurt Zouma – it is Gibson who has emerged ahead of Mason Holgate as the preferred partner for Keane. Which is exactly what should happen when you pay £6m to bring a 17-year-old from Newcastle.

“Some are showing their qualities, some are not, but it is part of the process and I can tell you that all of them are working hard and they are enjoying it,” said Marco Silva of his Under-23 tourers. “Some of them are showing something different to the others and one or two I am really happy with them.”