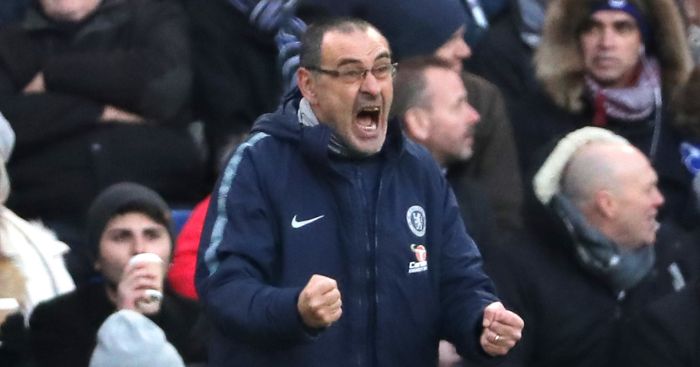 Maurizio Sarri claims he is not worried about the fans chants as his future at Chelsea became more uncertain after their 2-0 loss to Manchester United on Monday night.

Goals from Ander Herrera and Paul Pogba earned Ole Gunnar Solskjaer a sixth successive away win and a place in the FA Cup quarter-finals, against Wolves.

Sarri was subjected to jeers, boos and chants to be left in no doubt the strength of the Chelsea fans’ feelings towards him, just seven months since his appointment.

Chelsea fans joined in as United supporters sang “you’re getting sacked in the morning”, sarcastically applauded predictable substitutions and shouted “f**k Sarri-ball” in opposition to the possession-based tactics the 60-year-old boss favours.

Asked if he had heard that chanted at him before, Sarri said: “No. For everything, there is a first time.”

The Italian added: “I am worried about the results. Not about the fans.

“I can understand the situation and our fans, because the result wasn’t really good. We are out of the FA Cup, so I can understand. But I am worried about our results.”

“The things that are embarrassing, the 4-3-3 constantly – they’re playing Man City in the League Cup at the weekend and he’ll play 4-3-3 again, he’ll play Jorginho and Kante out of position and probably Kovacic or Barkley and then he’ll sub them.

“It’s embarrassing. Willian for Pedro? Like for like. Then it had to happen, Barkley on for Kovacic.

“But something that’s almost a sacking offence in itself bearing in mind the scenario is bringing on Zappacosta for Azpilicueta.

“I don’t care if Azpilicueta’s leg is hanging off and he had to go off, you’ve got Hudson-Odoi and Giroud on the bench and you’re 2-0 down.

“That’s the worst substitution I’ve seen in professional football for many a year.

“There’s no other way to put it, at the moment it looks like he’s out of his depth.”