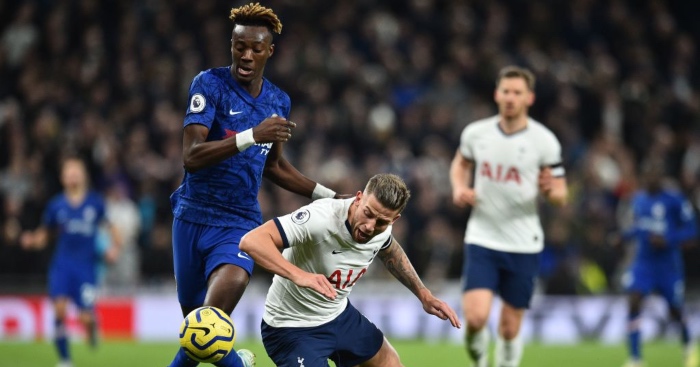 One of the most infuriating aspects of British sport in general, but English football in particular, is the desire to put a caveat on the performances of a young player, no matter how nonsensical or short-sighted that pub talk is. Take Harry Kane being a one-season wonder after his third or fourth 20-goal campaign, or the classic proviso currently being aimed at Tammy Abraham: ‘but can he do it against the best?’

Tammy Abraham may not have scored or assisted in Chelsea’s 2-0 victory over Spurs on Sunday, but Toby Alderweireld discovered just how good the 22-year-old is.

Not many would have thought – given the Blues’ recent history of strikers and their transfer ban – that after 17 Premier League games, Chelsea’s first-choice marksman would have scored 11 goals. Perhaps even fewer would have expected that man to be Abraham.

A more likely scenario would have been for the academy product to start the season, struggle to make an impact, and for Chelsea to revert to the safe but frustrating boots of Olivier Giroud, or maverick stylings of Michy Bathshuayi. Yet, despite Abraham’s excellent and somewhat surprising form in front of goal, there remains a conjectural asterisk next to his tally:

‘No goals against the ‘Big Six’

Alderweireld had just signed a new contract, after being persuaded to stay in north London through Mourinho’s ‘less draining’ methods, when he came up against Chelsea’s striking all-rounder on Sunday. And he presumably felt like he’d just had back-to-back Pochettino energy-sapping training sessions by the time Abraham was done with him.

The Chelsea striker is a defender’s nightmare-inducing combination of the two men competing for his place in the starting line-up. He has the pace and finishing ability of Batshuayi, and the touch, positional awareness and hold-up expertise of Giroud. Just as good with the ball at his feet as he is at controlling it on his chest or flicking it on for the ever-willing pressing runners, Mason Mount and Willian. The latter won the plaudits for Chelsea’s stellar afternoon at the Tottenham Hotspur Stadium, but would have been lost without the impact of their target man.

Abraham won six of his eight aerial duels with Alderweireld, but more impressive still was his ability to drag the Belgian out of position at will, and leave space for the fleet-footed Mount and Willian in behind. Chelsea created chances like this on three occasions in the first half-hour, so Alderweireld dropped off and gave Abraham time and space; the striker used it to chip a delightful ball over the Belgian’s head to Mount, who should have done better.

It was at this point that Alderweireld turned to Mourinho on the touchline and gave a slight, but perceptible shrug of the shoulders and raising of his hands, as if to say – ‘have we got a plan C?’

Though Mourinho didn’t answer, he may as well have responded with the same ‘f*** knows’ attitude, as Abraham continued to drag the now mentally and physically knackered defender all over the place in the second half. And such is Abraham’s striking totality, it’s difficult to know what Mourinho and Alderweireld could do. Try and fight him and you will likely lose out to his height and strength. Drop off and be punished by his passing and vision. Play a high line and risk falling foul to his long-striding runs in behind.

And while Abraham has a long, long way to go to reach the heights of Tottenham’s ‘one of our own’, the same battle for superiority between Kane and Kurt Zouma was unquestionably won by the Chelsea defender, who hustled and harried Harry throughout. Partly enabled by the cover of two other centre-backs, the Frenchman gave the Spurs captain no time and no space. And unlike Alderweireld, Zouma had a strength advantage over his opponent that meant that Kane struggled to keep hold of the ball and allow Tottenham to build the consistent attacks that Abraham expertly started for the visitors.

To suggest that Chelsea have stumbled upon a great striker may be unfair – he’s been at the club since he was seven, after all – but there is also no doubt that the transfer ban forced their hand. Abraham, along with Mount and Fikayo Tomori, would not have been granted the first-team opportunities had Lampard been allowed to add to his squad in the summer, no matter how strong his insistence in his belief in youth.

And despite a frenzy of transfer speculation surrounding Chelsea with the ban now lifted, the news is now not as welcome as it would have been at the start of the season. January signings are fine, Blues fans will say, as long as they are not made with a view to replace those academy products that have taken the chance they never thought would come. First and foremost, their home grown number nine that will continue to prove he is far more than the naysayers would have us believe.