Home F365 Features Prick of the Week No. 31: Perez, official spokesb*stard for ESL 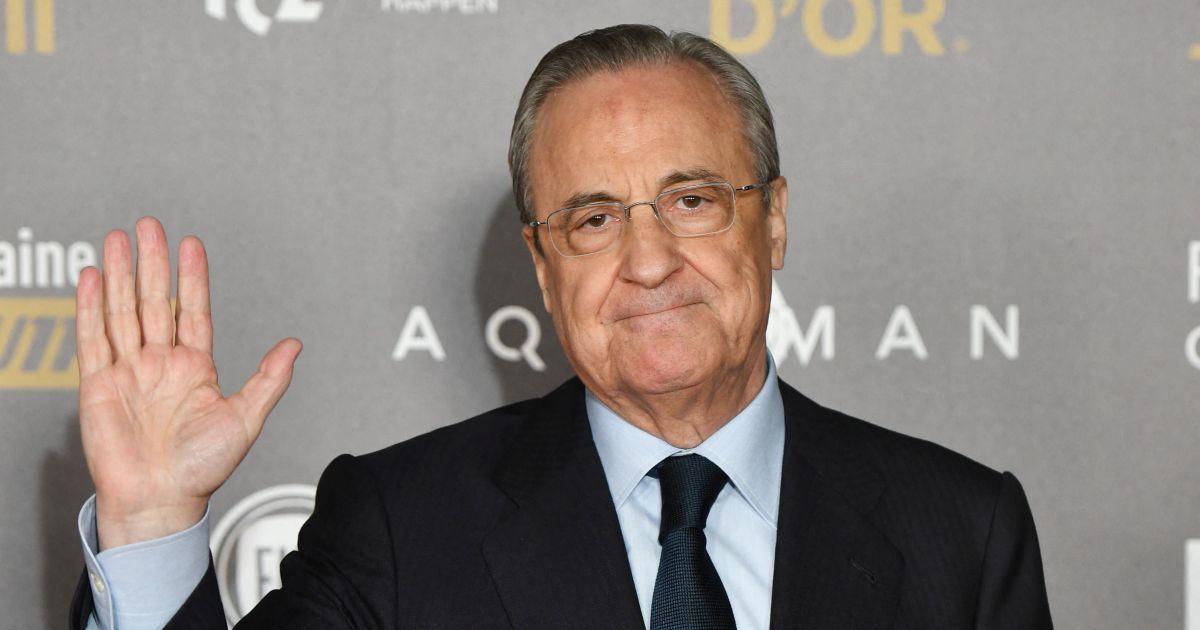 Tricky one this week. In as much as identifying a single prick among the vast array of pricks in a record-breaking week for prickery (the pandemic has had a bizarre timey-wimey effect on everything but it freaks our nut out that it is only five days since Spurs’ biggest online problem was getting bantered off by the paint dog) looked an almost impossible task. Step forward one brave hero to take all the prickish heat.

So who’s this week’s prick then?
Real Madrid head honcho Florentino Perez, self-appointed disingenuous spokesbastard for the gang of 12 clubs who want to ruin absolutely everything. (Additional timey-wimey observation: it is nine days since the game was gone because Manchester United had a goal disallowed for slightly soft reasons in a game they still won.)

What’s he done?
SPOILER ALERT: Ten of Europe’s biggest and best clubs, plus Arsenal and Spurs for some reason, have ham-fistedly and shambolically announced a plan to detonate the entire structure of football across the continent for their own benefit. This has been about as well received as you’d expect.

Absolutely everyone involved in this decision at those 12 clubs (fans, players and managers conspicuous from their absence in that particular group) is a prick, make no mistake. But we wanted to pick one out and were struggling a bit until Perez rocked up on Spanish radio to chat some astonishingly mad bollocks about how all this was necessary to save the sport we all love and was not in any way an attempt to destroy it.

There was some of this crud in the hastily cobbled together press release announcing the whole sorry farrago, a piece of work so obviously rushed and ill-thought out and finished at near midnight on a Sunday that it gave us uncomfortable flashbacks to our student days.

But up popped Perez to put some terrible flesh on those appalling bones. The thing is, The Young People don’t like football any more. A man who is part of a group who have dedicated their careers in football to pricing young people out of the game is baffled and saddened by this, and decided that there is simply nothing else to be done other than form a self-serving, self-governing gang of twats to make lots of money. That will get the younglings interested. And if it doesn’t, we can always just make the games shorter or something. Dunno, not really thought about it, don’t really care, where’s my money.

This all has echoes of the “short attention span” bumwhiff that friend of the column and Perez’s fellow ESL bigwig Andrea Agnelli was guffing out the other week. Bollocks then, bollocks now. We are very much no longer young, but we don’t have the energy or attention span to go over all the reasons why maybe the problem isn’t the feckless useless lack of concentration of a generation that watches three-hour Hollywood blockbusters and binges whole Netflix series in two days.

Absolutely everything Perez said about the ESL was at best disingenuous and at worst flat out wrong and insulting. It was an insult.

Mitigation?
At least, though, Perez has actually put his head above the parapet and attempted to defend the indefensible, however disastrously. The silence of the Premier League’s greedy six is incriminating and deafening. Not only has not one single responsible representative of an English club has come forward to sell this idea, they have left it to those who had no say and found out the same time as all the rest of us to do it for them. It was inevitable yet palpably unfair to see Ole Gunnar Solskjaer quizzed about it on Sunday afternoon after Manchester United’s game against Burnley. What on earth was he supposed to say?

But it was far, far worse that almost 24 hours after the announcement came that Liverpool manager Jurgen Klopp and national treasure James Milner were the ones having their say. Klopp may have missed the chance to properly put the boot in, but it’s a position he shouldn’t have to be in.

The grim hilarity of this whole Super League plan is just what a tinpot coup it actually is. Whether or not it ever actually comes to fruition, this has been an utter and total shambles of a launch.

It all points to the obvious explanation of being nothing more than a Champions League bargaining tool. But holding a gun to UEFA’s head and threatening to blow up the whole structure of the game is still appalling even if this time it is only a threat. And while, yes, some nebulous Super League chat always pops up whenever there’s a big European restructuring and rearranging going on, never before has the road been travelled quite so far.

If it is just a power move, it’s still utterly dreadful. If the clubs actually plan to go through with it, then it’s also a fiasco. It’s all so rushed and half-baked: the branding, the press release, the timing, the fag-packet maths (1. Launch Super League; 2. ?; 3. Profit), the apparent surprise at the backlash and utter failure to attempt to win hearts and minds.

Where is the PR work here? Where are the client journalists giving the clubs and plan some friendly write-ups? Where is anything approaching any kind of considered and structured plan?

It’s not like this is an entirely new idea. The Super League has, in some form, been a concept that has been floating around European football for decades with most of the current Dirty Dozen prime candidates for it. How have they managed to make such a massive bollocks of announcing it?

How is the only attempt at any PR Perez talking utter bollocks on Spanish radio?

Tottenham’s 29-year-old interim manager will today spend his first press conference in the job fielding questions about something he had absolutely nothing to do with while his boss hides in the background grateful there is not even an in-house Amazon camera in his face this season. Absolutely shameful.

So what happens next?
Christ alone knows. It still seems utterly inconceivable that such a nakedly evil and entirely unsupported tournament could actually go ahead, but we must accept it is at least possible along with huge points deductions and even relegations and title strippings for the clubs involved. Far more likely, with cracks in the rebel 12 already starting to show and reports that at least one of the English clubs (we assume City or Chelsea, always apparently the least likely and currently apparently allowing themselves to be dragged along out of pure FOMO which is, if anything, even worse than the naked despicable greed of the other pricks) are looking for an escape route, is that the whole thing sort of falls apart.

The clubs will probably get a bit more money and a bit more control of the Champions League and that was probably the main goal all along, no matter what the damage and the cost.

But while that still seems the likeliest scenario, there’s no denying it’s a really bloody weird one.

Attempted coups don’t really end with everything just sort of going back to how they were. But much as we’d like to see the Big Six booted out of the Premier League – even just out of curiosity about how that might look, never mind the outrage and deception – it still seems vanishingly unlikely.

Dishonourable Mentions
For now we should all be careful not to go too hard on the errant and unappetising hypocrisy of your FIFAs and UEFAs and Premier Leagues in their condemnation of all this. Our enemy’s enemy is our friend and all that, and stopping this will require some kind of united front from those who would not always be natural bedfellows.

But we can still point out that hearing the head of UEFA bemoan the fact that “For some, supporters have become consumers, fans have become customers and competitions have become products” is high-end prickery that makes us grind our teeth to dust in impotent rage.

And that goes double for bandwagon-jumping politicians, especially those who might be, say, a Prime Minister who has repeatedly and damagingly hidden when important things needed attention but faced with the sight of an easy popularity win with footer fans has got noisily and immediately involved.

Michael Heseltine’s line about Boris Johnson being a man who waits to see which way a crowd is heading, then runs to the front and shouts “Follow me!” has rarely felt more apt. Looking at the entire founding principles of the Super League, it’s hard to think of something more utterly aligned with his apparently strongly-held worldviews on certain other issues that people get cross with us whenever we mention.

Mourinho Corner
In many ways, the prickiest thing of the whole pricking week. We’ve spent nearly a whole season building up this whole column and this section in particular to Jose’s inevitable eventual sacking. And then when it comes it’s an afterthought. Classic Jose, classic Spurs.

In hindsight, doing the one thing that would bring the most possible pleasure to Spurs fans at the one time it actually won’t was the most Spursy and therefore only possible end to this disastrous 19-month experiment.

Of course, the timing of his departure is an absolute gift for the Fossilised One. He can now toddle off to international management and claim he could never have been a part of that awful Super League. Mourinho himself will probably never say it, but he’s certainly not going to do anything to refute the rumours that are already circulating.

There’s no way his sacking could just be down to terrible football and terrible results, even though his last six games comprised five Premier League games in which Spurs took the lead and a Europa League second leg against Dinamo Zagreb. Spurs took the lead in all five of those Premier League games and had a 2-0 first-leg lead in Zagreb and finished off with one win, two draws and two defeats in the league and a European exit very nearly as humiliating and degrading as their current European entry.

No, it must be down to the Super League. Definitely.

He now also gets the best of both worlds from the Carabao Cup final. If Spurs win, he got them there; if Spurs lose, as they most likely will, well, he got them to Wembley and who knows what would have happened had he remained in charge?