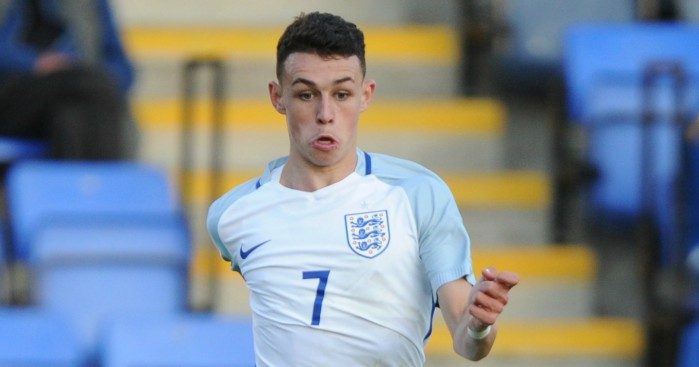 Manchester City midfielder Phil Foden (who has bought a house) has been handed his first England Under-21 call up.

The 18-year-old is joined by Arsenal’s Reiss Nelson – on loan at Hoffenheim – and Leicester’s Harvey Barnes, currently on loan at West Brom, as squad first-timers.

The trio are included for the final two Euro 2019 qualifiers against Andorra and Scotland, with Aidy Boothroyd’s Young Lions needing just a point to qualify.

Boothroyd needed reinforcements after James Maddison and Mason Mount earned senior calls while Demarai Gray is out with an ankle injury.

Boothroyd told Press Association Sport: “Phil has got great respect from us. He’s another player we want to push through and we can see him playing in the senior team but he’s got to prove himself with us.

“He is a massive talent. We want him to get games and the more he gets the better he’ll become.

“He’s also training with the best players in the world and the current champions. He is going to get a great education at Manchester City.

“If you can train with that calibre of player and coach (Pep Guardiola) and get game time that’s the holy grail. That’s what’s going to develop them.

“We can trust Manchester City, they know what they’re doing.”

Foden – who scored twice in the Under-17 World Cup final against Spain when England triumphed last year – has made five appearances for City this season, scoring once in the Carabao Cup win at Oxford.

He is the youngest player to win the Premier League after playing five times in City’s triumph last season.

Nelson moved to Germany in August and scored on his Bundesliga debut. He has also played in the Champions League this season.

Barnes has impressed at the Baggies, netting four times in 13 games after joining on a season-long loan.

Boothroyd said: “He deserves it. He has gone out, he has proved himself worthy of a start and has become a key player for West Brom.

“We’ve been tracking him for a long time but because of the quality of the squad he has had to get past Demarai. We’re disappointed to lose Demarai but it gives Harvey an opportunity.

“It’s up to Harvey, Reiss and Phil to show they can stay in the squad. It makes it hard for me to decide who to pick.”

England are top of Group Four – six points clear of Scotland and Ukraine – ahead of the final two qualifiers.

They host Andorra in Chesterfield on October 11 before travelling to Tynecastle on October 16.