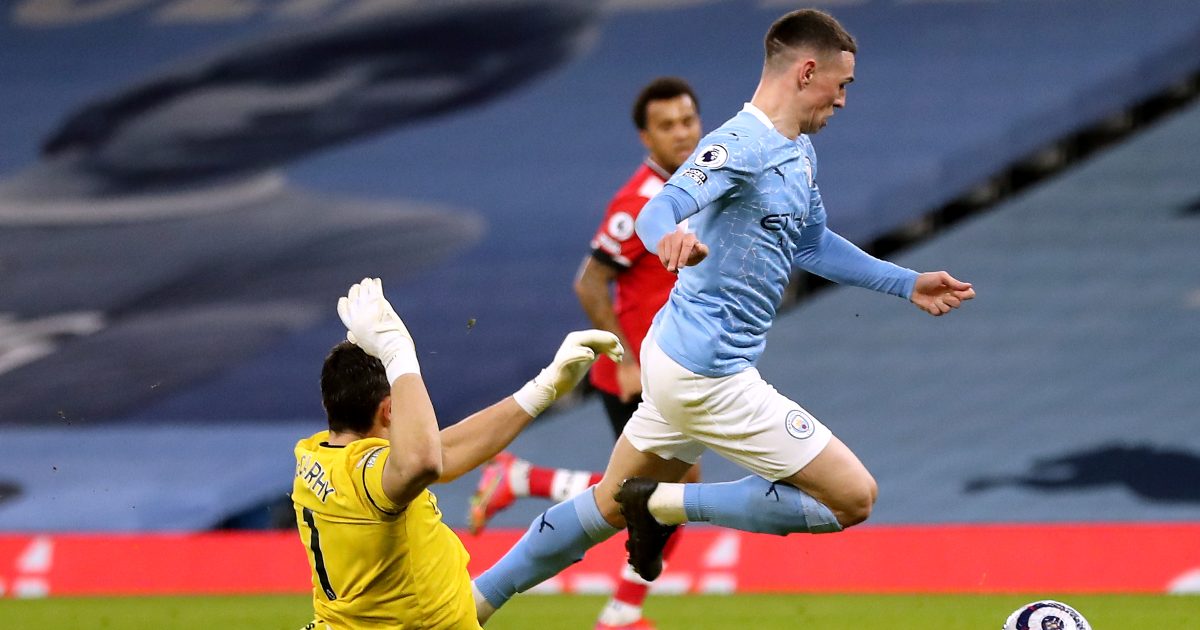 The Phil Foden VAR incident against Southampton that did not lead to a penalty encourages players to be “dishonest” according to former Man City player Shaun Goater.

City midfielder Foden was caught on the ankle after being tackled feet first by goalkeeper Alex McCarthy in the Premier League leaders’ 5-2 victory over Southampton at the Etihad Stadium.

Referee Jon Moss gave nothing as Foden scrambled back to his feet in an attempt to score but the chance was gone and City were incredulous that VAR did not intervene.

The incident occurred with the score 1-1 and, even though City recovered to win convincingly and extend their lead at the top of the table to 14 points, it remained the main talking point.

“He was fouled and tried to stay on his feet and retrieve the ball. It all happened so quickly and he was thinking if he could get to the ball he could tap it into the goal.

“But in trying to stay on his feet the referee and VAR have basically said no penalty. It’s just crazy.

“If I’m a player watching that today I’m making sure that I’m going down, even though it isn’t the strongest challenge. So I’m now starting to play and be dishonest.

“I’m sure players will be watching and thinking, ‘Why stay on my feet now?’”

It was the latest of a number of refereeing controversies this season and came after Southampton were awarded a penalty in the same game for a less blatant foul when Jannik Vestergaard was impeded by Aymeric Laporte.

He said: “The Southampton penalty, he feels the hand on the shoulder and he goes over. I look and I say that’s a penalty because for any type of contact nowadays they give penalties. How they don’t give Phil’s I don’t know.

“We’re now confused. There is no consistency. It makes you fall out of love with the beautiful game. We’ve gone down this road but I think we’re at a dead end.

“It’s like we need to make a U-turn and make some adjustments, recalibrate the sat nav. It’s really bizarre where we are.”

After their penalty controversy, City reclaimed the lead with a fine Riyad Mahrez strike before the Algerian hit the post and Ilkay Gundogan tapped in the rebound. Mahrez and De Bruyne struck again in the second half either side of a Che Adams consolation.

The result saw City, who now have nine games remaining, get back to winning ways after last weekend’s derby loss to Manchester United.

Foden said: “We are so close at the moment but we need to keep taking it game by game and put points on the table.”

Even though his side were ultimately well beaten, Saints manager Ralph Hasenhuttl felt his side could be pleased with a positive performance.

Hasenhuttl said: “Pep (Guardiola) told me that not many teams come here and play football like we did.

“We didn’t get anything for it but I like this game more than parking the bus and still losing. It’s a better way for us to compete, as long as we do it right.”